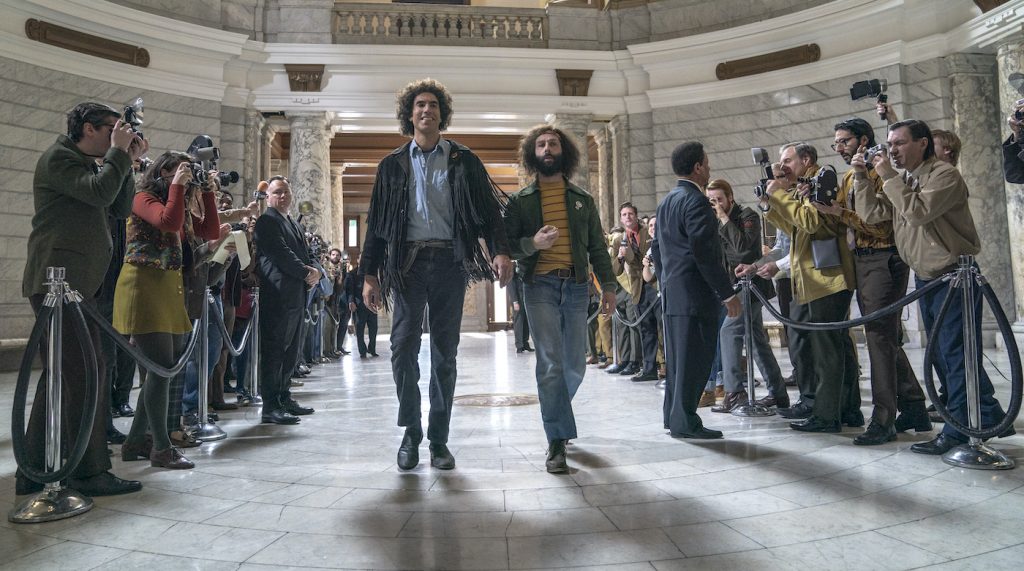 The reviews are out for writer/director Aaron Sorkin‘s The Trial of the Chicago 7, a film that’s painfully timely. Sorkin’s second directorial effort is a look at the protests surrounding the 1968 Democratic National Convention, which escalated when the Chicago Police Department and National Guard descended and turned what was a peaceful gathering of Americans making use of their First Amendment rights into a violent clash. Sound familiar?

The Trial of the Chicago 7  focuses on both the protest itself and, of course, the trial that took place in the aftermath. The organizers of the protest include Abbie Hoffman (Sacha Baron Cohen), Jerry Rubin (Jeremy Strong), Tom Hayden (Eddie Redmayne), and Bobby Seale (Yahya Abdul-Mateen II). These men were ultimately charged with conspiracy to incite a riot in what became one of the most notorious trials of the century. The cast also includes Mark Rylance as their attorney William Kuntsler, Joseph Gordon-Levit as prosecutor Richard Schultz, and Frank Langella as Judge Julius Hoffman.

So does Sorkin’s film capture the moment? According to critics, it sounds like it does—both the propulsive, transformative year of 1968 and our own current, propulsive, straight-up terrifying year of 2020.

Let’s take a peek at some of those reviews:

Owen Gleiberman of Variety: “Aaron Sorkin’s “The Trial of the Chicago 7” is the rare drama about the 1960s that’s powerful and authentic and moving enough to feel as if it were taking place today.”

Stephanie Zacharek of Time Magazine: “The Trial of the Chicago 7 details events that happened more than 50 years ago. The time to look away is never.”

David Rooney of The Hollywood Reporter: Sorkin has made a movie that’s gripping, illuminating and trenchant, as erudite as his best work and always grounded first and foremost in story and character.

Brian Truitt of USA Today: “The filmmaker crafts an entertaining, immersive and ultimately optimistic spectacle that never forgets, especially at its ending, that humanity should always trump the system.”

Ty Burr of the Boston Globe: “Trial” is so inherently compelling – and so directly germane to an America where the government labels cities “anarchist jurisdictions” and states are drawing up laws against free assembly – that it doesn’t need the frills.”

The Trial of the Chicago 7 premieres on October 16 on Netflix.

What was intended to be a peaceful protest at the 1968 Democratic National Convention turned into a violent clash with police and the National Guard. The organizers of the protest—including Abbie Hoffman, Jerry Rubin, Tom Hayden and Bobby Seale—were charged with conspiracy to incite a riot and the trial that followed was one of the most notorious in history.

TAGSNetflix The Trial of the Chicago 7