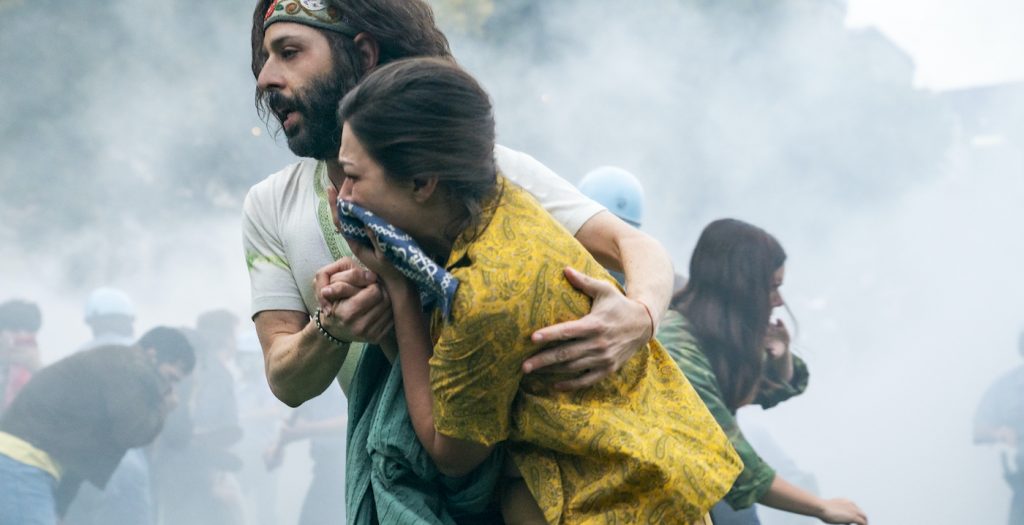 Aaron Sorkin’s second directorial effort, The Trial of the Chicago 7, comes to Netflix at a time of upheaval the United States hasn’t seen to quite this degree or intensity since the events depicted in the film unfolded. Those events cover the 1968 Democratic National Convention in Chicago when peaceful protestors led by some of the country’s most prominent activists marched on the city, and the Chicago Police Department and the National Guard swept in to crush them. Sorkin, one of Hollywood’s most prolific screenwriters, has chosen quite the topic, at quite the moment, for his follow-up feature to 2018’s Molly’s Game. Netflix has released his film’s official trailer, and it’s a doozy. Sorkin’s cast of top-flight talent—which includes two recent Emmy-winners in Jeremy Strong (Succession) and Yahya Abdul-Mateen II (Watchmen)—feels painfully resonant right now.

The Trial of the Chicago 7 will likely introduce younger viewers to some of the mid-to-late 20th century’s most influential voices for the first time. The film focuses on both the protest itself and, of course, the trial that took place in the aftermath. The organizers of the protest include Abbie Hoffman (Sacha Baron Cohen), Jerry Rubin (Jeremy Strong), Tom Hayden (Eddie Redmayne), and Bobby Seale (Yahya Abdul-Mateen II). These men were ultimately charged with conspiracy to incite a riot in what became one of the most notorious trials of the century. The cast also includes Mark Rylance as their attorney William Kuntsler, Joseph Gordon-Levit as prosecutor Richard Schultz, and Frank Langella as Judge Julius Hoffman.

The trailer sizzles. The scenes of the protest—cops and guardsmen streaming into a march of non-violent protestors with batons and shotguns at the ready—looks like America right now. For younger viewers, these images might pull them in, seeing how so much, and also how little, has changed in the tumultuous country they are trying to navigate. The year 1968 is often brought up as one of the hardest, most crushing years in American  history. It was a year that saw mass protests against the war in Vietnam and the assassinations of Martin Luther King. Jr and Bobby Kennedy. As we grapple today with a country that feels as if it’s teetering on the brink, it might be helpful, or at least informative and absorbing, to watch a film that focuses on another such pivotal moment in American history.

Sorkin is a master of the courtroom drama, as he proved so long ago with A Few Good Men. There is little doubt the scenes of the trial itself will be riveting. How well he and his sensational cast paint the larger picture of America on the edge will be one of the many reasons The Trial of the Chicago 7 feels like a must-see film.

The Trial of the Chicago 7 debuts in select theaters and on Netflix on October 16. Check out the trailer below:

What was intended to be a peaceful protest at the 1968 Democratic National Convention turned into a violent clash with police and the National Guard. The organizers of the protest—including Abbie Hoffman, Jerry Rubin, Tom Hayden and Bobby Seale—were charged with conspiracy to incite a riot and the trial that followed was one of the most notorious in history.

TAGSNetflix The Trial of the Chicago 7