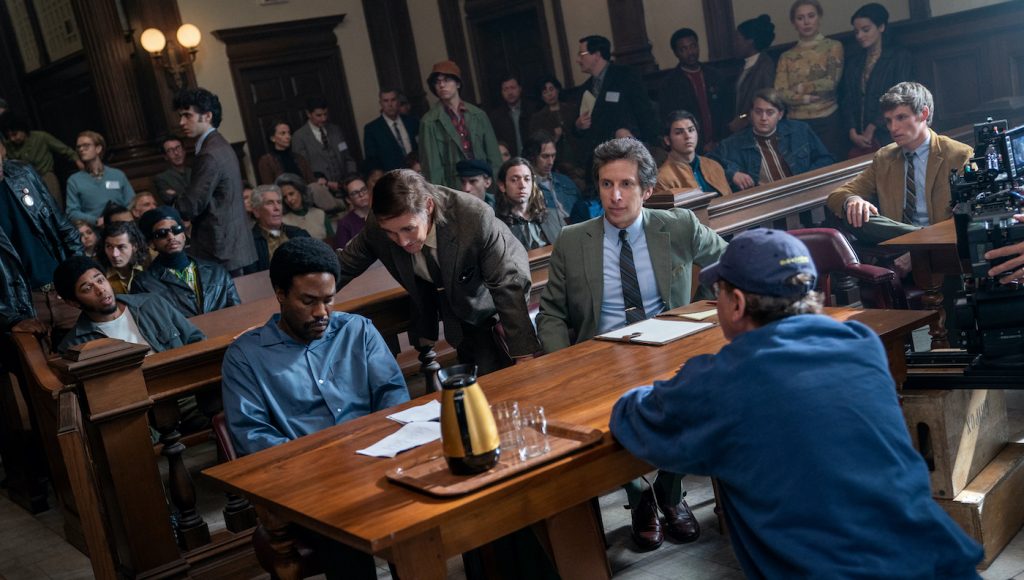 For his latest feature coming to Netflix on October 16th, writer and director Aaron Sorkin shifts his political eye from the West Wing to the US government’s judicial branch. In The Trial of the Chicago 7, Sorkin revisits the drawn-out trial of a group of Vietnam War protestors, including Abbie Hoffmann and Tom Hayden, accused of inciting violent riots at the 1968 Democratic National Convention in Chicago. The crux of the trial turns on whether the men conspired in their actions, a particularly egregious accusation given that the police committed the violence, many of the group on trial had never previously met, and one of the defendants, Black Panther Bobby Seale (Yahya Abdul-Mateen II), wasn’t even at the protests.

The film opens to a mixed montage of historic footage of President Johnson’s televised draft and each of the men preparing at home for the trial. The story then moves into scenes set in the Chicago courthouse, building to a rapid back and forth between the trial and flashbacks to what took place in the moments leading up to a wave of orchestrated police brutality. A Sorkin signature, rapid, information-dense dialogue laid over the action, marks the film’s prologue and key montage digging into the events in question. For the film’s editor, Alan Baumgarten, in sections like these, hitting the right beats starts with the actors’ lines. “The focus primarily is on getting the rhythm and tempo of the dialogue and the tone exactly the way Aaron wants it. Once we work on the dialogue and the rhythm, we then expand and continue to flesh out the film.”

Luckily, starting with the words and building from there in the editing room is a clear process for Baumgarten, who also edited the Sorkin-directed feature Molly’s Game. “Aaron’s dialogue is so beautifully written and carefully crafted, it provides a fantastic blueprint for me to work from. As long as I follow the script and the performances with that dialogue and those rhythms, I actually have a lot of freedom to portray the visual elements that go along with that,” he says. Visually, the biggest moments in The Trial of the Chicago 7 take place in court, at the defendants’ tongue-in-cheek titled Conspiracy Office, and in the park where the police let loose, but the characters’ parrying in these scenes guides the visuals, whether the actors are speaking in a scene or talking over it. “A lot of the dialogue that Aaron writes is meant to carry over. It’s not a voice-over per se, but to illustrate what’s happening with a layered approach showing other imagery that fills in the blanks or supports or coincides with what’s being said,” explains Baumgarten.

As the months-long trial drags on, Sorkin reveals the full extent of Judge Julius Hoffmann’s (Frank Langella) acrimony toward the defendants. Seale, who has no lawyer and didn’t attend the protests, winds up bound and gagged in the courtroom in one of the film’s most unsettling scenes. In flashbacks, Abbie Hoffman (Sacha Baron Cohen) pontificates on the events to college students in a sort of macabre mix of stand-up comedy and political lecture. In the movie’s present, the divide between Hoffmann and Hayden (Eddie Redmayne) illustrates how this group not only didn’t commit conspiracy, they can’t even agree on events that already happened. They hardly know each other, much less are in agreement on how to get US troops out of Southeast Asia. “What’s fascinating to me,” says Baumgarten of these key scenes, “is [Sorkin] has an ability to capture dialogue the way people actually speak. Sometimes the dialogue is very realistic in terms of pauses and missteps or backtracks or stumbles, or a bit of irregularity in the way a line is given, which he writes in. Then at other times, it’s heightened, more complex and dense, almost the way we wish we did speak.”

For the editor, this means combining the director’s two styles, while looking out for dense moments with several characters talking at once, where another Sorkin stylistic technique sees a clever rejoinder or re-stated question ensure that key bits of information land where they’re needed. “He’s very aware how to track and make sure essential beats come through, despite having that organic sense of chaos. I find it very helpful that we don’t have to go back and say, oh boy, something important is not coming through here, we have to find a way to reiterate or restate it,” says Baumgarten. In a Sorkin drama, everything is on the page. “Joseph Gordon-Levitt said at one point, I learned every syllable, down to the comma.”

The Trial of the Chicago 7 lightly condenses and dramatizes historic events, but the film rings true, and in the wake of protests for George Floyd and Black Lives Matter, the resonance is potent. In some moments, it can feel like the biggest difference between then and now are the cops, who used to go after peaceful protestors in shirtsleeves instead of full cosplay war gear. “The timeliness of this film was something we didn’t anticipate to the extent that is happening,” Baumgarten says. “We were still finishing the film, so it was quite shocking for all of us, and chilling, to be working on a project which we had tried to make work on its own terms and in its own way, with tear gas, rioting, and police beating up on protestors, and then seeing the same thing happening on the news.” The movie does stand on its own, but viewers would be forgiven for feeling like they’re watching an educational, tightly-edited prequel to what’s on the news right now.

TAGSEditor Interviews Neflix The Trial of the Chicago 7