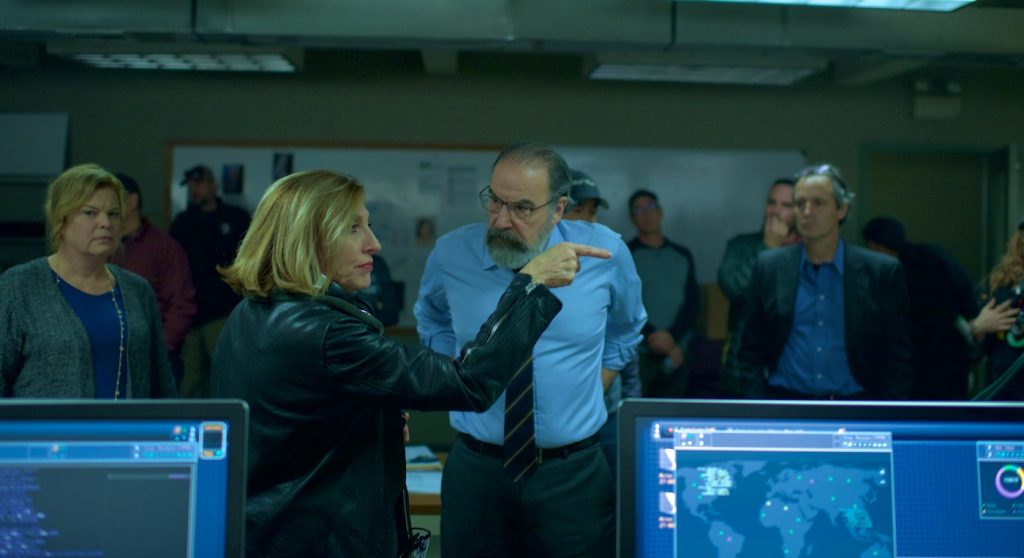 Lesli Linka Glatter has spent the last several years being alarmed by what she’s heard in intelligence briefings. This doesn’t just set her apart from many of the current apparatchiks in Washington, but also from many of her fellow directors. Not because her colleagues lack the capacity to be alarmed, but because her work as a director and an executive producer on Showtime’s Homeland would bring her, on an annual basis, to something that series creators Howard Gordon and Alex Gansa would call “Spy Camp,” in the D.C. area.

There, the creative team—producers, writers, and performers—would meet with intelligence officials, in what Glatter calls “an amazing, amazing experience, also terrifying.” There, the group would ask them “What keeps you up at night? What’s your biggest fear?”

One of the answers that really surprised them was that “Russia is everywhere,” this coming about seven years ago after they’d figured, as Glatter put it, that “Russia was over.” And yet investigations of hacked elections and multi-pronged social media manipulation were still a glint on the horizon, even if the series was able to incorporate a lot of those ideas first.

In fact, the series finale even ends in Mother Russia, with Claire Danes’ Carrie Mathison pulling a kind of “triple-axle” character arc. Glatter directed that last episode and called it “an amazing responsibility, a terrifying responsibility,” thus emulating some of the emotional ups and downs of Spy Camp itself. Particularly as “the whole intention of this season was to come full circle” to its starting point.

In that first season, Nicholas Brody, a Marine Corps sniper, played by Damian Lewis, had just come back from a long captivity by al-Qaeda. The question then was whether he’d been “turned.” And with that circle, it’s a question that haunted the show again, after Mathison returns, in the last season, from captivity in Russia.

War, meanwhile, brews in the Mideast as the American President’s chopper has gone down in Afghanistan.

Given that the series was born out the anxieties and aftermath of 9/11 while being based on the Israeli TV series Prisoners of War (which was the title of Homeland’s final installment), Glatter notes that part of that full circling was to ask “what America learned since 9/11?” especially “given what we’re in right now from this horrifying pandemic.”

Glatter doesn’t need to go to Spy Camp anymore to hear how people are working behind the scenes to deal with, and head off further crisis; she’s also currently on the DGA’s COVID-19 Task Force. They are trying to figure out how (when) to reopen the business of making shows.

“The world has to calm down a bit more, we don’t have a national policy,” she observed, perhaps understating the case. And while she mentioned the DGA was working with epidemiologists,  she wasn’t at liberty to talk, yet, about what the specifics of a “safe set” might be, at least from an official Guild perspective (the IA, SAG-AFTRA, and other entities would all have to come to an agreement on this, too).

The news, then, really, is that alas, there is no specific news about when production, as we knew it, might resume.

“Everyone wants to get back,” she agreed, “but I don’t see how anyone can give a timeline at this point. There are so many smart people working on this. Everyone is trying to figure this out. We’ll find a way to be back,” she concludes.  “I feel like I’m a realistic optimist.”

Another thing she keeps working on figuring out is how to get more women into directors’ chairs, particularly on TV sets.  It has been perhaps a tad harder to stay unreservedly optimistic about that. She started directing after an Oscar-nominated short brought her to the attention of both Steven Spielberg and David Lynch, and episodes of Amazing Stories and Twin Peaks followed.

Originally, though, she’d planned on a career in dance and choreography, but it was a grant to perform abroad that changed everything. It led to her to places like Paris and London, and eventually the Far East, and specifically Japan, which she describes as “life-changing, like being dropped on another planet.”

The true life change came when she found herself in front of two different coffee shops one morning, in dire need of a cup. In a Robert Frost-like moment of choosing paths, she “picked the one on the right.”

In the crowded shop, she found herself waved over to an open spot on at a table by an older man, “which was a little unusual,” she allows. He was 75, she was 25, and he’d been a war correspondent, Buddhist monk, and was currently head of cultural affairs for Japan’s largest newspaper.

They spent hours talking, and as their friendship grew, he told her stories from different wars. Glatter knew she had to do something with them. “I thought maybe it was a theater piece,” she says, but then came another chance meeting with George Miller, yes, that one, of Mad Max fame, and he convinced her what she had was a film.

And eventually, after applying to the AFI Directing Workshop for women, which she didn’t think she qualified for since she was lacking previous credits, she made it. The resulting film, Tales of Meeting and Parting, was “three-fourths in Japanese, had flashbacks, was partially set in WWII (and) had one Caucasian actor,” and as unlikely as that was, eventually had its Oscar nod in the short film category in 1985. And the rest, as they say, is history.

“No one has the same path to directing,” she reiterates. “You have to learn the things you don’t know. (But) we never stop learning; we’re always learning.”

Right now, she’s waiting to learn when she can head to Hungary to direct her series for Amazon, The Banker’s Wife, about the machinations of international finance, money laundering, and more. She’s unpacked her bags once, and now stays in touch with cinematographer John Conroy, who recently won an ASC award for his work on the series The Terror.

“Even though we’re shut down, I have a weekly conversation with him,” she says. They look at films together, exchange photographs, and work toward coming up with “a visual style with the story we are telling.” Which shares, with Homeland, the fact it’s also a political thriller.

And in that genre, in particular, she says, “there’s a level of anxiety in absolutely everything.”

Which might be said of life in the 21st century, as well.