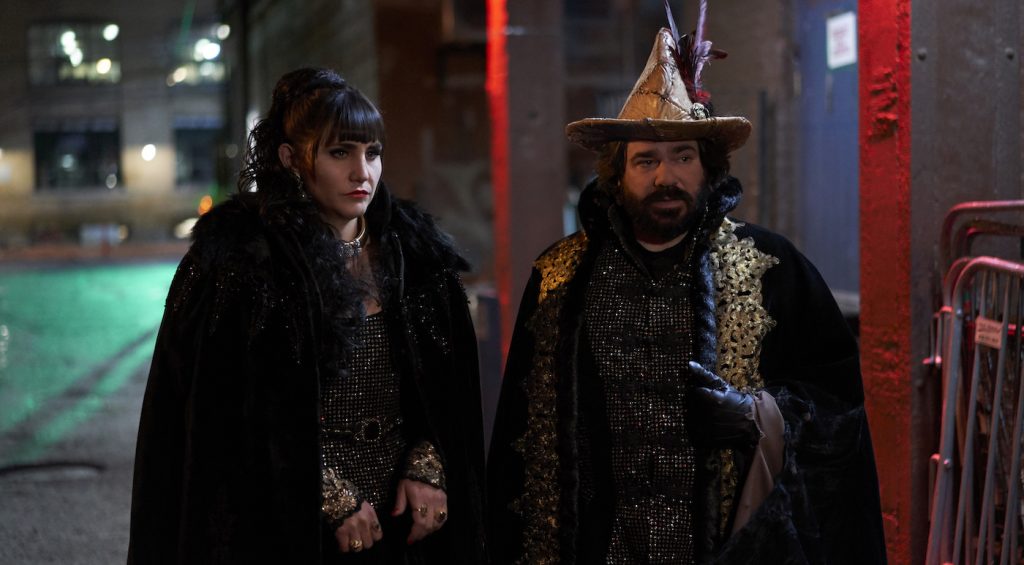 What We Do in the Shadows, based on the feature film of the same name from Taikia Waititi and Jemaine Clement, is unlike any vampire show on TV. Like the film, the show is staged as a documentary of four vampires who have been living together for centuries. In the series, which airs on FX, our vampires live on Staten Island (in the film they were based in Wellington, New Zealand, Waititi and Clement’s home country). Emmy-nominated cinematographer DJ Stipsen can now say he’s a master of the mockumentary-style, having nailed it on both the big screen version and in the FX series. It’s not an easy show to film. First, every shoot takes place at night. Second, with the level of comedic talent involved, Stipsen and his team have to make sure to capture every bit of comedy, including all the improv, in a style that demands it looks as if the camera were happening upon these moments rather than staging them. Stipsen was nominated for filming episode four when our Staten Island vampires head into Manhattan to try and forge an alliance with the king of the Manhattan vampires. You can imagine how well that goes.

We spoke to Stipsen about allowing his camera to find the comedy, learning from The Office, and season one’s most ambitious sequence.

What kind of changes did you need to make going from the film version to the series?

When we shot the movie, obviously the premise is a mockumentary and the idea is that the film crew is allowed into their world and explicitly won’t get eaten. That’s the deal. I’ve shot a lot of documentaries, and I’d say this is more of a talk show or reality show type feel. This is panic-gathering based on whatever’s happening in front of the camera due to what the vampires are up to. We are very reactive to whatever’s happening. A lot of that comes from the film, too. If I hadn’t shot the film, it would have been a very steep learning curve.

You have to throw out everything you’ve learned as a DP. You can’t frame drama shots, because as soon as you start framing these shots, you’ve lost the audience because it looks set up. You have to make the frames look found. One trick is zooming in and out, which is difficult for an operator, someone has to go from a group shot of five people and then zoom into someone’s face. As far as operating the camera goes, you have to allow yourself to arrive a couple of beats late. You have to zoom in or pan across, which adds to the feeling you’re finding the action rather than knowing what’s going to happen.

There’s obviously a connection between What We Do in the Shadows and The Office in terms of the mockumentary style.

They were the trailblazers for the found ‘actuality’ of being with these absolute idiots. In fact, I remember my father, who worked in the film industry, and he phoned me up one day and asked me if I had seen this documentary. He said it’s some idiot in an office and he’s allowed the camera to follow him. Then I watched it and said, Dad, this is not real. This is The Office.

That show was the benchmark for us. The problem is we’ve got stupid things like vampires and werewolves, but we had to present them like David Brent or Michael Scott, we had to present our vampires and make them as believable as those guys. At the end of the 30-minutes, you’re thinking, well, yeah they’re real and they’re idiots.

How do you handle making sure you don’t miss a bit of brilliant improv?

Jermaine and Taika do this thing when they’ll see a scene, and it takes 30-seconds, they’ll go and have an actor flip a line, so that’s the level of talent. The flip side is we’re a handheld show, so it’s very hard on the operators and the focus pullers. To keep things feeling found, they have to move the cameras and change the focus and not make it seem like they’ve done this a million times before.

Filming only at night sounds…difficult.

It’s horrific. It’s really grueling. It’s a minimum 12-hour shoot. The interior set is a set, we have a lot of guest sets, the animal control center, staircases, inverted sets, green screens, so we have places to go if we needed to shoot during day time. But as a general rule, you’d be coming home 8 in the morning. For ten weeks. Both Jermaine and I were in awe of the Canadian crew. A big kudos to the actors who, at 4 am, are still bringing the comedy. We’re on set all the time, there’s no downtime for us. But those guys, if they’re not required in a scene, they’ve got a couple of hours to hang out in their trailer, and then they come back to set that’s booming and have to be on.

Do you have a favorite sequence?

Taika came up and directed a couple of episodes, one of them has this crazy scene in the asylum where a character breaks out. When I was reading the scene, I thought it was interesting, but Taika had a great idea for the breakout from the asylum—we’re going to shoot it all in CCTV, and then he’s going to jump into a giant dumpster, then steal a car, and then we’ll be in a convenience store and we’ll see this through these kids’ cell phone cameras, and we’ll see him come careening around the corner. Also, it’ll all be one shot.

Did you pull it off?

We shot it in one shot, but it didn’t make onto TV as one shot. But in this one sequence, there’s a stunt car with a stunt driver coming around the corner with no tires and his rims are sparking, with our actor lying on the ground, then our stunt car hits the crash car, and then we had newspapers flying into the air, then we had fire effects in the car, and then the camera—the kids’ cell phones—and had to catch a motorcycle coming around, then another stunt double comes from behind one of the actors, and our stunt performer puts on a motorcycle helmet and jumps on the motorcycle and drives off. All of this is live-streamed on these kid’s phones, all in one shot, in 360-degrees. At night. And it worked. Everything timed out.

TAGSCinematographer Interviews what we do in the shadows