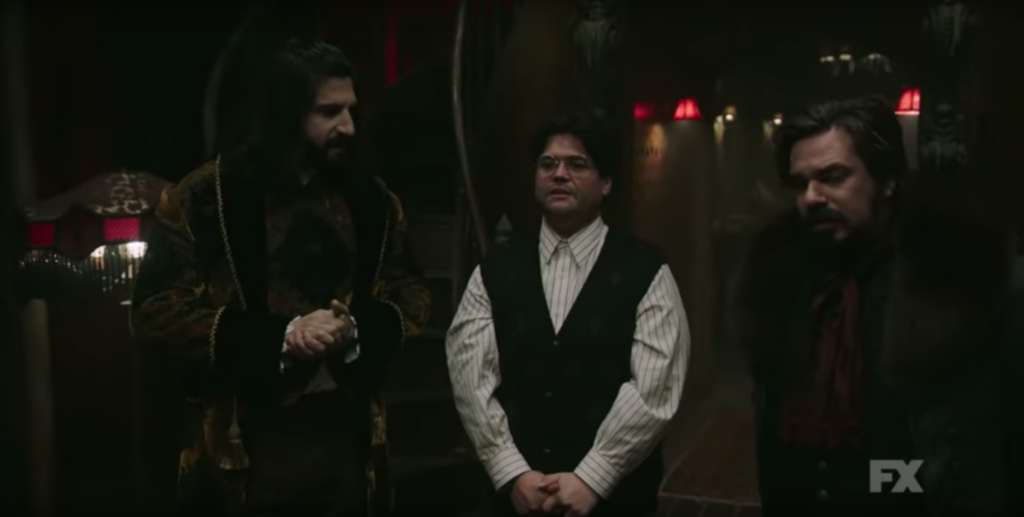 Don’t believe in vampires? Here is a new theory that could make you a believer. According to the first full trailer for the What We Do in the Shadows spinoff series, not all vampires drink blood. there is an entire breed that survives by boring people to death. We all know them and are now going to be certain that they exist. Mostly in our offices.

These “energy vampires” are a highlight of the preview for the new series that appears to capitalize on all the things that were great about the original movie. From the minds of Taika Waititi and Jemaine Clement, the show follows three vampire roommates and their challenges with being blood-sucking immortals in the 21st century.

For new fans who haven’t seen the movie (inexcusable), the show looks like it will retread some of the greatest scenarios to orient viewers. The vampire’s familiars, or servants who have been promised immortality, look primed to take on a larger role. Guillermo (Harvey Guillen) is heavily featured in the trailer. Other familiar setups include house rules among the flatmates, the hygienics of draining humans, and the desirability of virgin blood.

There is plenty that is new, however. The flatmates, Nandor (Kayvan Novak), Nadja (Natasia Demetriou) and Laszlo (Matt Berry) are all new characters. The film didn’t delve deeply into female vampires beyond The Beast (Elena Stejko), so we have our eye on Nadja.

Although Waititi and Clement directed the film, they will not be returning to their starring roles. The show will follow a new house of vampires. Thor: Ragnarok director Waititi directed the series, however, and Clement wrote the episodes. Although he is a newcomer to the MCU, Waititi did weigh in on Avengers: Endgame while on a press tour for Shadows.

“I haven’t seen it, so I don’t know even what happens,” Waititi told USA Today. “They keep their cards so close to their chests. But from what I’ve heard, it wraps up everything in a really great way,” he continued. “It feels like the fans are getting rewarded for hanging around for 10 years and watching all these films. Because the more you know about the characters and the stories and stuff, the more satisfying this film will be.”

That definitely sounds promising. Waititi has also mentioned he would like to return to direct in the MCU, but nothing is on the books yet.

FX’s What We Do in the Shadows premieres March 27.

Featured Image: What We Do in the Shadows. Via: FX

TAGSFX what we do in the shadows