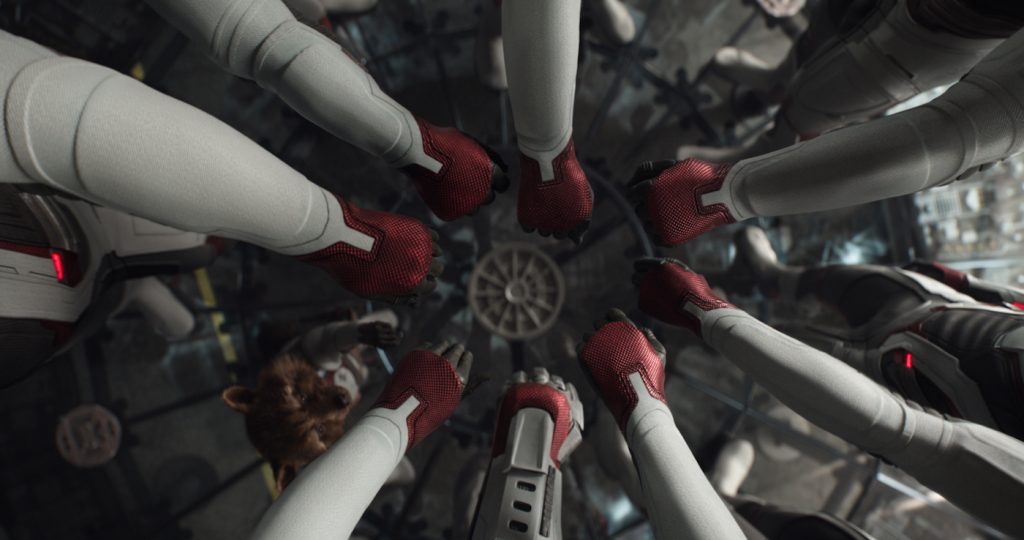 The title to this piece is a spoiler warning, so obviously don’t read further if you haven’t seen the film yet.

Okay, let’s talk about Avengers: Endgame. Specifically, the ending. And by ending, I mean the major, MCU-shaking revelations that began occurring once the Hulk snapped the vanished back to life with the reconstituted Infinity Stones. (Which resulted in seeing Hulk in a sling—another unexpected Hulk-related image from the film.) So many major, MCU-redefining moments came rushing at us once Hulk pulled off the reverse-snap that it’s worth it to take a look at them one-by-one:

Captain America is Worthy of Mjolnir!

If your theater was anything like my theater, the moment Cap summoned Mjolnir drew shrieks of joy and confusion, in equal measure. Say what? The last time Cap—or any other Avenger—tried to lift Thor’s hammer, nobody could get close. This was in Age of Ultron, in the gleeful moments during a party at Avengers HQ before the titular mad robot showed up. However in Endgame, with Thor’s life on the line, Cap was able to not only summon Mjolnir but call lightning from the sky and bring it down on Thanos’ head.

So the question is how was Cap able to do this? What made him suddenly worthy? You could argue that, generally, Cap’s arc has finally led him to a place where he is at peak nobility, and thus Mjolnir becomes accessible to him. Here he is, yet again putting his life on the line, and he’s doing so without any of the conflicted feelings of fellow Avengers (see; Stark, Tony). A more specific theory relates to Tony Stark—that when Cap finally told Tony that it was Bucky Barnes (brainwashed, but still) who killed his parents, he’d finally come clean and thus became worthy of Thor’s hammer. We may never get the exact reason, but the moment itself somehow felt completely right.

You know what else felt completely right? Cap’s decision to step out of the superhero game once he’d completed his mission to return the Infinity Stones to their proper place along the space-time continuum. Returning to our timeline an old, satisfied man, Cap hands off his shield to his friend and fellow Avenger Falcon. Then, we’re whisked back in time to see the life that Cap decided to lead once Thanos was dust—a life with Peggy Carter, the woman he has long loved. Ending the film with Cap and Peggy Carter’s kiss was just about perfect.

Will Marvel’s female superheroes get their own A-Force film?

It seems wrong—very wrong—that the moment in Endgame where seemingly every woman in the MCU was onscreen together didn’t include Black Widow. Her death earlier in the film was, to our mind, the most heartbreaking moment of all. While Black Widow is getting her own stand-alone film (which will clearly be set in the past), the shot that captured Nebula, Gamora, the Wasp, Mantis, Okoye, Scarlet Witch, and Valkyrie was a brief, thrilling glimpse at what could be, only it felt incomplete without Black Widow. There has been talk that Tessa Thompson has discussed an all-female Avengers film with Marvel CEO Kevin Feige, and this shot might have been a hint that this is indeed happening. There’s already precedent in the comics—”The A-Force” was about an all-female superhero squad.

Thanos and his army are finally defeated by the collective might of all the Avengers (and, crucially, the Wakandan army), but it’s a single act by Iron Man that seals the victory for good. After he wrests the Infinity Stones from Thanos, Tony Stark delivers a line that brings us all the way back to the very first MCU film, 2008’s Iron Man. “I am Iron Man,” he says to the stunned Mad Titan, who looks down at his worthless, Infinity Stones-less Infinity Gauntlet. It was the callback of all callbacks, and it came a moment before Tony snapped Thanos and his hordes to dust.

Bonus points for those of you who figured out who the teenager was at Tony’s funeral—it was Harley Keener, the little boy from Iron Man 3.

The Newest Guardian of the Galaxy?

Chunky Thor played a big part in defeating Thanos in Endgame. A literally big part, considering the mighty Asgardian Thunder of God had put on considerable weight after he killed Thanos the first time, five years previous. Thor’s journey seems to be taking a new, cosmic-direction—we leave him with the resurrected Guardians of the Galaxy. Once again there’s some bro-ish banter between Thor and Peter Quill. Is Thor the newest Guardian? It sure looks like that.

If Thor indeed has a part in Guardians of the Galaxy Vol. 3, might it be to help them track down the 2014 version of Gamora? Endgame brought Gamora back, thanks to all the time-traveling, but this version didn’t know who Peter Quill was. Might their next mission be trying to track down an earlier version of Gamora, the one that fell in love with Quill before being offed by Thanos? Perhaps.