Someone—or possibly someones—will not make it out of Avengers: Endgame alive. We’ve waited a year to find out how our survivors are going to get all the folks who died in Infinity War back. Yet what has always seemed likely is it would require some sort of tragic trade. The Avengers figure out a way to undo the Thanos Snap, but in doing so someone has to make the ultimate sacrifice.

While we were pondering the odds on who might bite the dust (after reanimating Spider-Man, Black Panther and more from dust), we decided to put together these Marvel cards for our main characters. The cards are mere sketches of our heroes’ backgrounds, abilities, and, chances of survival. We’ll explain our reasoning for these survival percentages beneath each card.

Another thing to note is we made cards for the superheroes who have appeared in the trailers and teasers, hence, you won’t find Valkyrie, Wong, Okoye, Pepper Pots, or Happy Hogan here. Although we’re guessing every one of them will have their moment in Endgame. 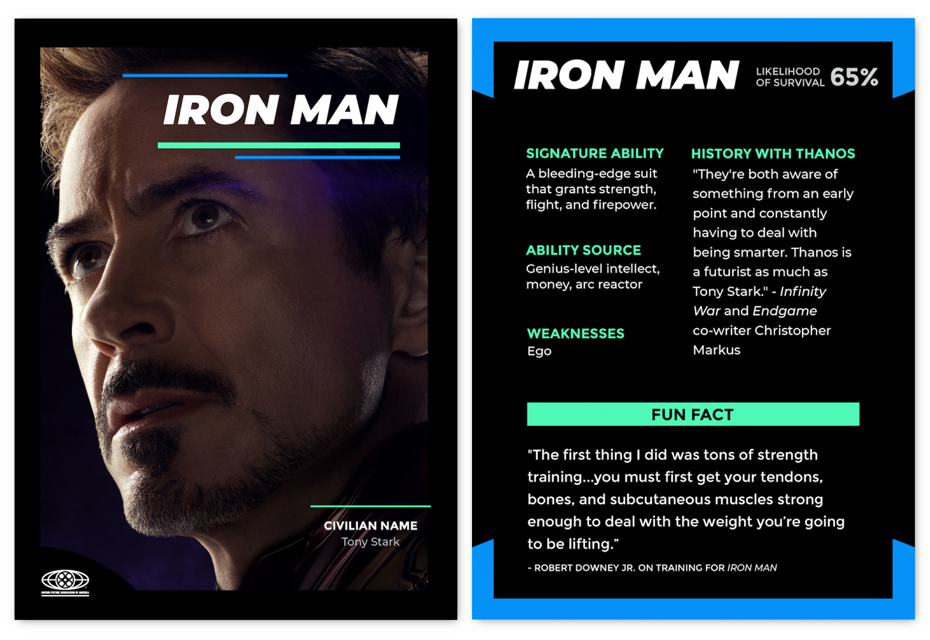 It seems more than likely that Tony Stark’s days as Peter Parker’s benefactor will continue in the Spider-Man franchise. Robert Downey Jr. is the longest-tenured member of the Marvel super club, having been around since Iron Man kicked off the MCU in 2008. We haven’t heard the same kind of “he’s done” chatter that we have about Chris Evans, but Iron Man sacrificing himself would make narrative sense. He did as much during the Battle of New York in the first Avengers, perhaps this time there won’t be any coming back? Yet we’re betting he makes it through. The main reason is that Chris Evans has repeatedly said he’s done playing Captain America. Add to that the emotional weight that the death of the noblest of all Avengers would add to Endgame. Cap is a more complex figure than one might assume on first blush, but his guiding principle has been consistent and concise: he sticks up for the little guy. Thanos is the ultimate bully, and Cap giving his life to the cause of standing up to Thanos—again—makes grim, poetic sense. Plus, again, Evans said he was done with the role. With that said, he could survive and simply resign (?) or hand his shield off to somebody else. This scenario seems…odd, but it’s not implausible. Hence the 33%. 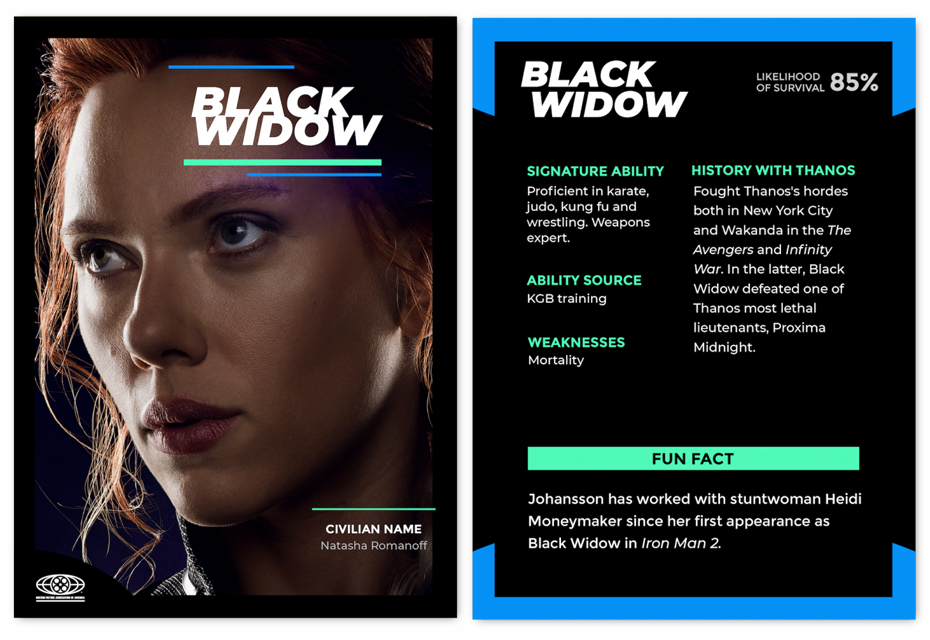 One reason that would seem obvious is that Johansson’s Black Widow is getting her own film. Yet from what we’ve heard, it’ll be set in the past, when Natasha Romanoff makes her break from her KGB overlords. Yet we still think it’s very likely Black Widow survives Endgame. She’s the most resourceful of all the Avengers, and it’s hard to imagine the Russo Brothers and writers Christopher Markus and Stephen McFeely making this her swan song. 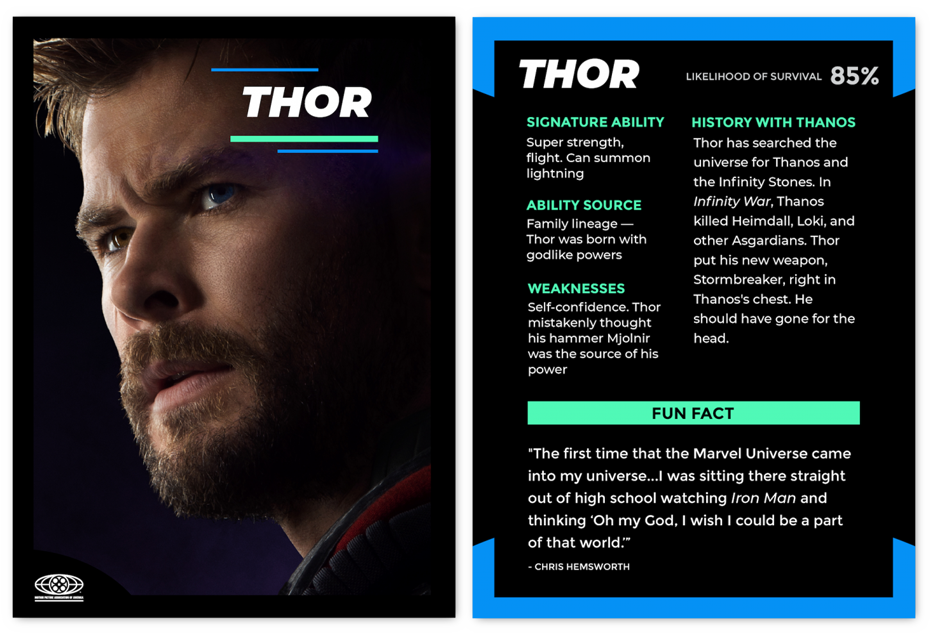 There’s been talk of a Thor 4, for starters. Secondly, Hemsworth, incredibly, seems to just be getting started with the Asgardian God of Thunder. His comedic chops were on display in Taika Waititi’s excellent Thor: Ragnarok, and unlike that other Chris, he doesn’t seem ready to take a knee. Thor has emerged as one of the most potent, beloved Avengers, and had he just put Stormbreaker in Thanos’s head instead of his chest, everything could have turned out differently. 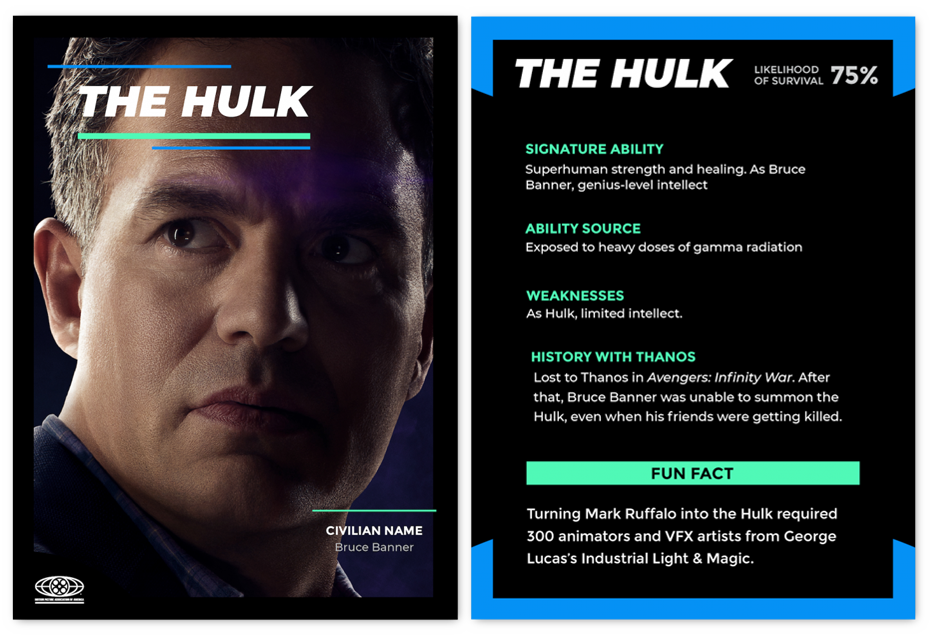 Unlike other Avengers (Hawkeye, Black Widow, Scarlet Witch, Vision, Falcon, Winter Soldier) who have Disney + projects in the offing, there’s been no word on the next time we’ll see Mark Ruffalo’s Hulk. We think that, considering the events in Infinity War, when the Hulk not only lost a fight to Thanos but then refused to show up for the rest of the time, he makes a big comeback here. 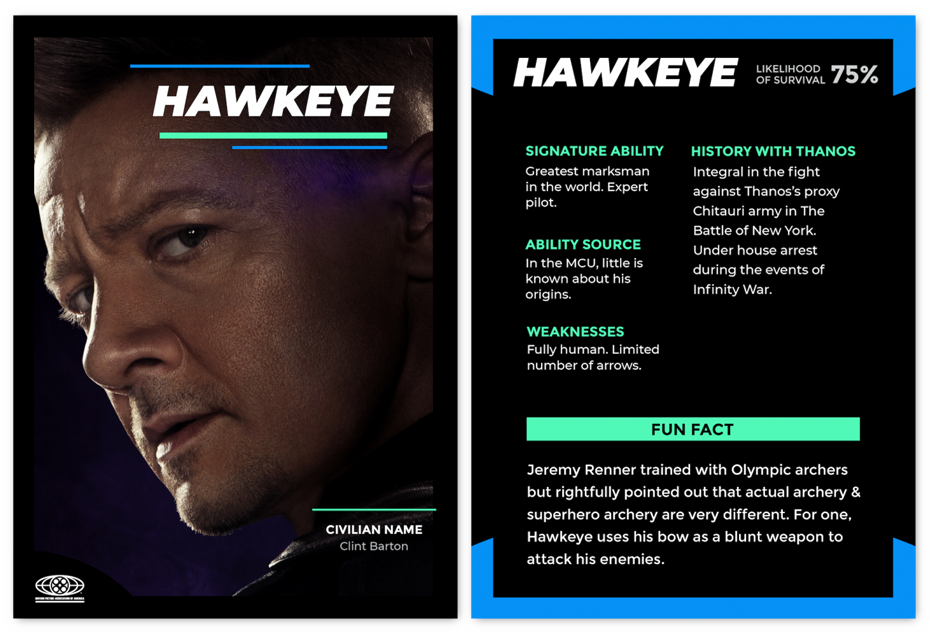 Why not 100%, considering he’s got his own show in the works for Disney +? One reason is we don’t know when that show is set—it could take place before the events of Endgame, although that seems unlikely. Hawkeye was notoriously missing during Infinity War due to being under house arrest. He’s back, and we’re guessing he’s got a very personal bone to pick with Thanos. It seems likely Barton proves himself useful and manages to survive the fight. 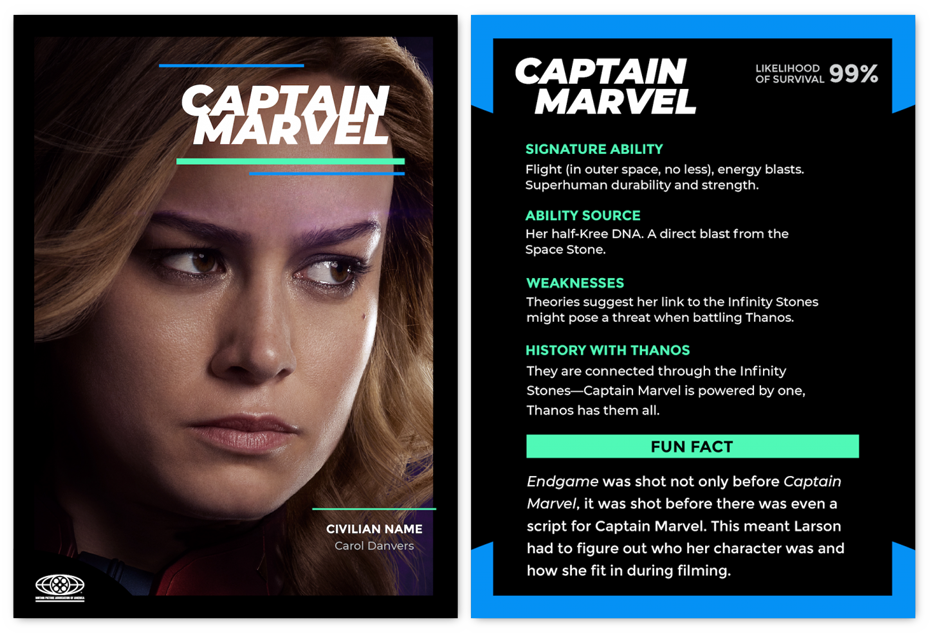 Brie Larson’s Captain Marvel is just getting started. She only just had her big Marvel debut this past March, and she’ll figure prominently in Marvel’s Phase 4. Look for Captain Marvel to play a big part in taking Thanos down. 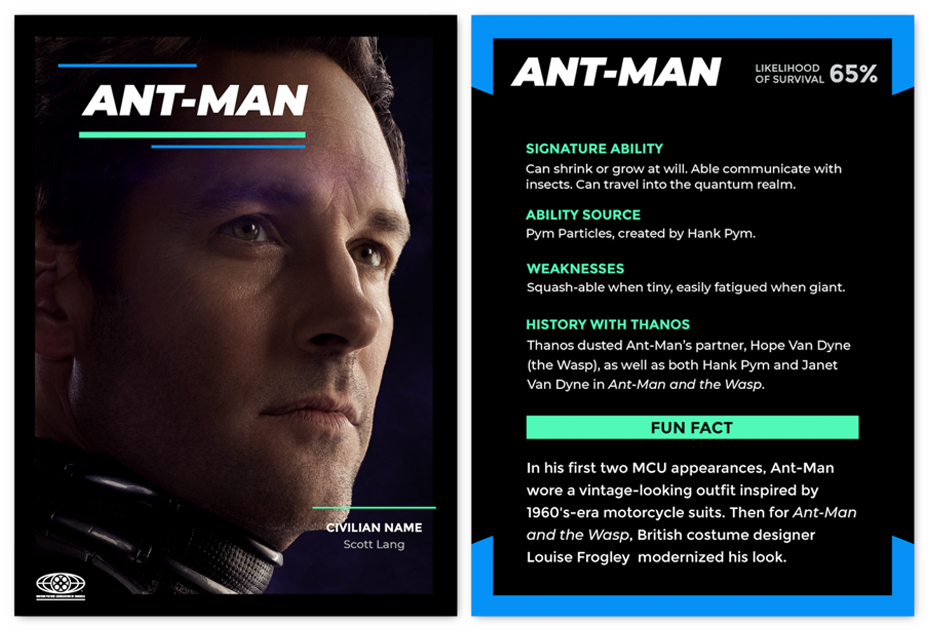 Admittedly this percentage might be a little low. It seems hard to fathom that the Russo Brothers would take out Paul Rudd’s Ant-Man, but then again, they dusted Tom Holland’s Peter Parker in Infinity War. Then again, Peter Parker is coming back (Spidey’s got his own franchise, after all), so…we think it’s a better than average shot Ant-Man’s not only going to survive but have a major part to play here, Quantum Realm-style. 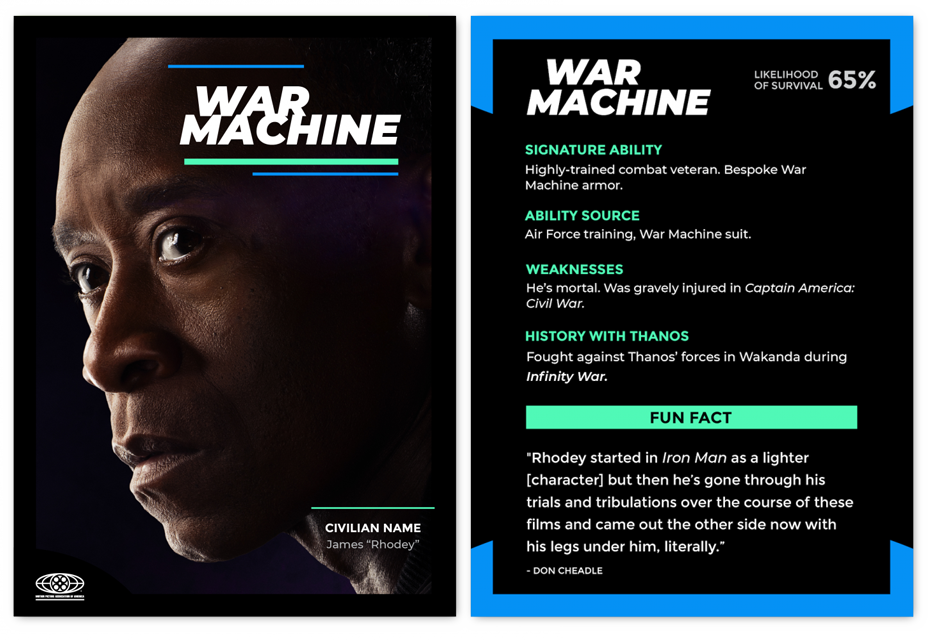 It was recently revealed that a stand-alone War Machine movie was briefly in the works until it wasn’t. Don Cheadle’s patriotic Rhodey has already been through a ton—he was paralyzed (for a spell) during Captain America: Civil War. Without any Disney + series upcoming, and with Rhodey’s penchant for going all out, there’s a decent chance he sacrifices himself in Endgame, but a better chance he pulls through. 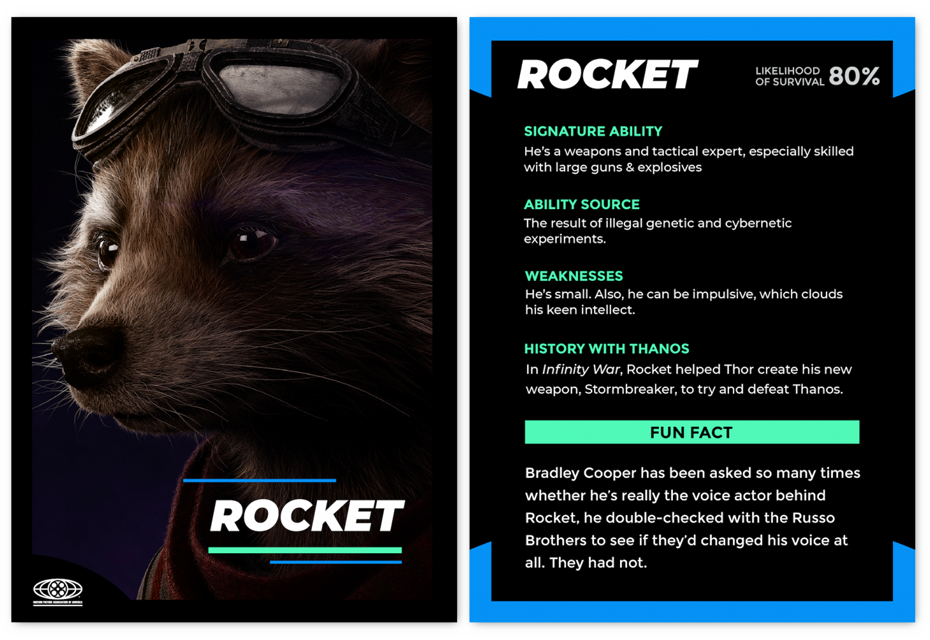 Guardians of the Galaxy Vol 3. is on the books, and Rocket’s involvement seems mandatory, no? It would be poetic if Rocket helped get the rest of his dusted Guardians back and died in the process, but we feel fairly certain the wise-cracking, explosives-loving alien raccoon will live to fight another day. This could be lower. Maybe it should be lower. Nebula’s been a fount of rage ever since she burst onto the scene in the first Guardians of the Galaxy. Yet Karen Gillan’s turn as the mostly cybernetic assassin has been an intriguing character study. She’s slowly, begrudgingly become something of a hero, and as we stated above, nobody has more of a reason to want to see Thanos dead than she does. This means she’s a strong candidate for sacrificing herself. Come on. Endgame represents the culmination of a 22-film, decade-long epic experiment in interconnected filmmaking. Thanos has been the Big Bad almost from the start. As Marvel heads into Phase 4, they’ll be introducing new superheroes and new supervillains. Thanos has given the MCU the psychopathic, surprisingly complex antagonist it deserved. His time has come to an end. Why not 0%? Because! We reserve the right to leave a single percentage point’s worth of chance that the Russos—for some reason—keep Thanos around. It’s very unlikely. And there’s exactly a zero percent chance Thanos wins this round.

Enjoy the film! Know when to use the bathroom!