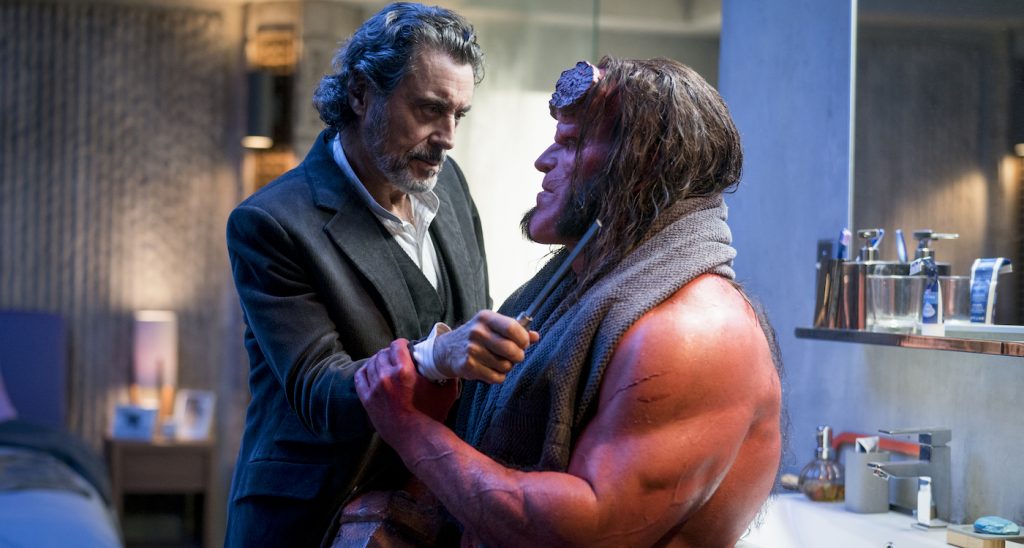 The First Hellboy Clip has Arrived

The first official Hellboy clip is here. Professor Bruttenholm (Ian McShane) has an intriguing offer for his adopted son from hell (David Harbour)—a mission to The Osiris Club. We’ve gotten a better sense of how director Neil Marshall’s Hellboy is blazing its own trail via the trailers. Guillermo del Toro’s beloved two Hellboy films meant Marshall and his star Harbour had their work cut out for them. From what we’ve seen, Harbour‘s take on the red demon with a heart of firey gold is very much his own. In this clip, Hellboy is all of us—talking with his mouth full while eating a slice of pizza.

The clip is focused on the father-son dynamic between the professor and Hellboy. One of the most interesting aspects of the new film are the folks our hornless hero will be working with and against. There’s Daniel Dae Kim’s Ben Daimio, one of Hellboy’s partners in the B.P.R.D. (Bureau for Paranormal Research and Defense) and a man with some monstrous powers of his own. There’s also Alice Monaghan as Sasha Lane, another highly potent B.P.R.D. member with ties to the film’s main villain. That would be Milla Jovovich’s Nimue the Blood Queen. She doesn’t understand why Hellboy is fighting on behalf of the very humans who fear and loathe him. In the last trailer, she even offered to marry him. He told her it would never work—he’s a Capricorn, and she’s insane.

This Hellboy also feels like much more of an action film than Del Toro’s two films. Marshall knows how to stage creepy quests—think of the work he did on the spectacularly scary The Descent. The new clip gives us a sense of the camaraderie between the professor and the demon. The main thrust of the film, however, will be its action set pieces and its title character’s irreverence.