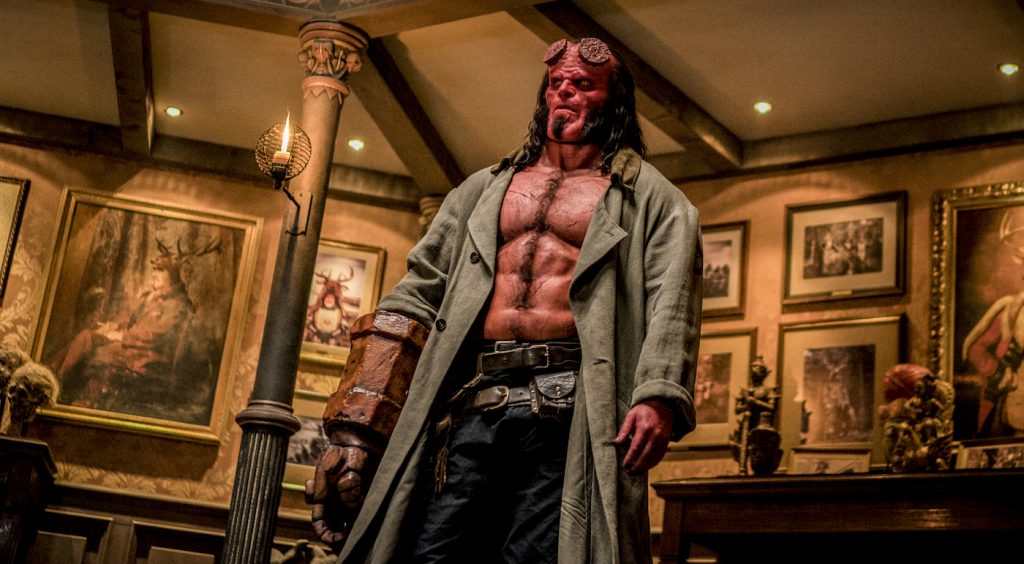 “On an island off the coast of Scotland, something was summoned from the depths of Hell. Something that will end mankind,” says Lady Hatton (Sophie Okonedo). What kind of terrifying monster is she referring to? This is the very question our hero, Hellboy (David Harbour) has at the start of this new trailer.

“And this thing you’re worried about, did it show up?” our red, de-horned hero asks, somewhat naively we must admit.” Lady Hatton delivers the answer everyone but Hellboy sees coming.

As we promised you yesterday, the new Hellboy trailer is here. This gives us our best look yet at David Harbour‘s take on the red demon with a heart of firey gold. The Descent director Neil Marshall has unleashed what appears to be a lot of bloody mayhem here. Harbour seems like a natural fit for a role made famous by Ron Perlman in Guillermo del Toro’s two Hellboy films. He’s got the right amount of chutzpah, wise-cracking wit, and just enough sincerity. He cares, but he’s a little annoyed about it.

We also get a better glance at Hellboy’s friends and enemies. This is our first look at the beast inside Daniel Dae Kim’s Ben Daimio—he seems like the perfect partner for Hellboy. In fact, we have two trailers to share—the second being the NSFW red band version.

The red band trailer makes the most out of Hellboy‘s R-rating. The language is as strong as the gore. And while this Hellboy is inevitably (and endlessly) being compared to the previous Hellboy films, it really does feel like it’s own thing. There’s an absolute ton of action here. No one can accuse Marshall, Harbour or anyone else on this film for not giving it their all.

Harbour’s commitment to the role is evident, and it makes this Hellboy very interesting indeed. He told Vanity Fair that it’s the big red guy’s inner conflict that makes him so compelling:

“He’s a creature that was meant to bring about the end of the world, and he just sort of wants to be a good guy. He’s got that complexity to him. He’s also a monster who lives among human beings, so he’s in a sense fighting for human beings against his fellow monsters, and yet the humans hate him because they fear him and they think he’s weird looking and everything.”

Harbour’s take on the role is not so dissimilar to what the X-Men have been up against in their continuous battle to save humanity from their fellow mutants. Milla Jovovich’s Nimue the Blood Queen is Hellboy’s Magneto. She’s his antagonist as well as his questioner. Think of Magneto’s ongoing dialogue with Professor X in the X-Men films, which essentially boils down to “why are you helping these people who hate you?” The Blood Queen has the same questions. She can’t understand why Hellboy is fighting for people who loathe him. The difference here is she wants him to be her king. The problem, of course, is he’s a Capricorn, so, it’ll never work.