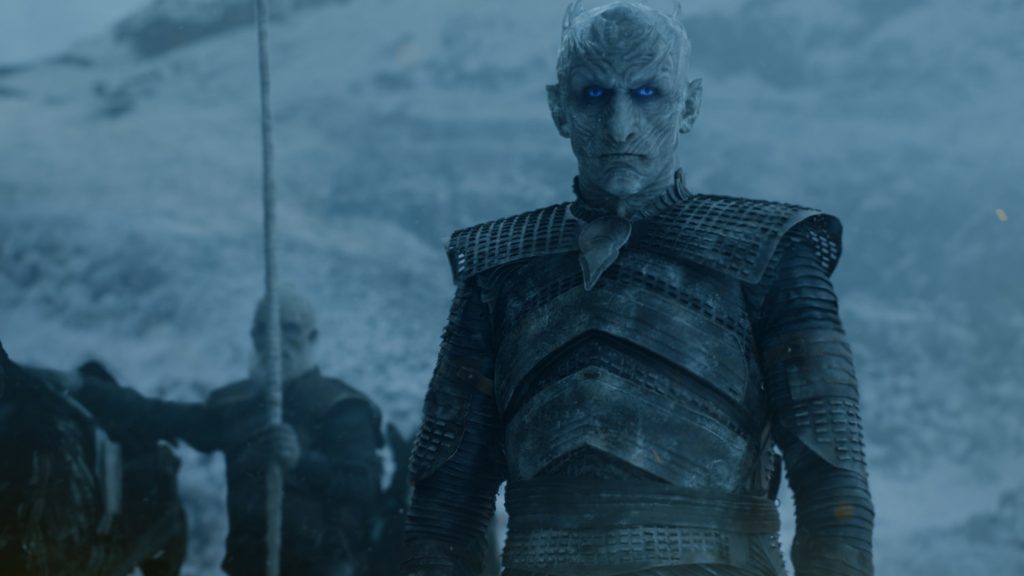 So we’ve all watched that cryptic Game of Thrones teaser, correct? HBO has become expert at creating teasers that don’t actually show us footage from the upcoming season but are more like very beautifully crafted, narratively relevant art pieces. This most recent teaser was not the kind of fan-baiting that we’ve seen in the past (that melting block of ice, anyone?), but rather an artfully staged trip both into the past and the future, with a chilling hint of what’s to come. The teaser featured the three surviving Stark children—Jon, Sansa, and Arya. No Dany, no Tyrion, no Cersei—HBO is bringing us back to the first family of Westeros, the only people in the entire, sprawling GoT universe who have displayed any kind of moral code—a major liability.

The teaser takes place entirely in the Crypt of Winterfell, where Catelyn and Ned Stark now reside. We watch as Jon, Sansa, and Arya moves through the crypt by torchlight, passing the statues of the towering figures from Winterfell’s past, while we hear (and we presume, so do they) the voices of Lyanna, Catelyn and Ned. Lyanna begs for the safety of her child (Jon), Catelyn laments her refusal to recognize Jon as anything more than a bastard, while Ned implores Jon to remember he is a Stark. By the teaser’s end, our heroes come face-to-face with their own statues, and they look understandably stricken. The statues depict them exactly as they are now, meaning their deaths are imminent. It’s at this point their torches blow out, an icy fog creeps in, and we’re keenly aware that this represents the Night King and his army of the dead, the force that could kill the remaining Starks. There are a few odd things that happen throughout that warrant our attention (which was, of course, by design).

We see a feather float up behind Jon as he passes the statue of his mother, Lyanna Stark. This feather goes all the way back to the pilot episode, when Lyanna’s husband, Robert Baratheon, placed a feather in her statue’s hands. Sansa finds this feather in season 5, not knowing at the time that Lyanna was not kidnapped by Rhaegar Targaryen as everyone told her—Lyanna ran away with him and eventually gave birth to Jon. The feather likely represents this central secret; Jon was not conceived out of some monstrous kidnapping and rape by Rhaegar Targaryen, but out of love. He is both a Stark and a Targaryen, a potent combination indeed.

As many folks have pointed out, just because HBO put Jon, Sansa, and Arya’s statues in this teaser does not, of course, mean their fates are sealed. Recall the Hall of Faces teaser that HBO dropped before season 6; there were all sorts of characters represented in that teaser who didn’t die. The worrisome thing for Stark fans, however, is that we are at the end game here, and there’s a very good chance not all of them will make it. Fans have pointed out that Arya’s statue, in particular, seems like a bad omen; she’s brandishing her sword and knowing how tough and brave she’s become, it’s not a stretch to imagine her meeting her end in the final season.

A thought that had never occurred to us until this teaser was whether or not the Night King could resurrect people like Catelyn Stark, to say nothing of Lyanna. When the torches go out and the icy fog settles in, suddenly we’re faced with the proposition of the Night King raising people from the Crypt of Winterfell—what an awful challenge that would be, forcing Jon or Arya to face an undead Catelyn in battle. As for Ned, his body was never sent back, so we should at least be spared having to see him do battle against his children.