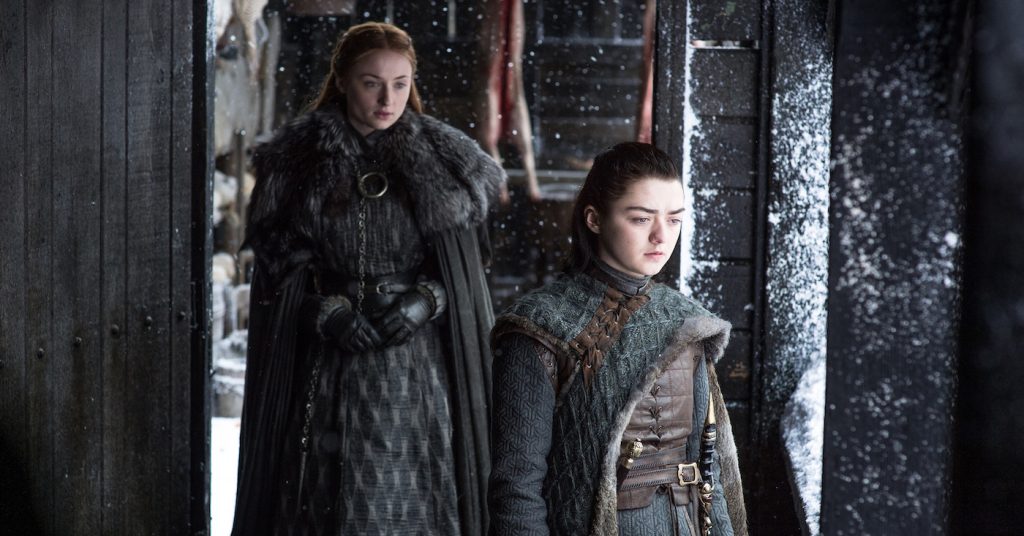 The first official teaser for Game of Thrones 8th and final season begins more or less where the epic series began—the Crypt of Winterfell. I say the series began there because it was Ned Stark (Sean Bean)’s death in season one that sent such shockwaves through the viewing public (especially for those of us who hadn’t read George R. R. Martin’s “A Song of Fire and Ice” novel series) and made Game of Thrones a show even people who claimed to hate fantasy pay attention to. Ned’s death also served as a warning to all viewers that in the world of Game of Thrones, no one safe, not even the series biggest star.

The new teaser is set in the place the surviving Stark children hope to avoid for a long, long time. Jon Snow (Kit Harington), Sansa (Sophie Turner), and Arya (Maisie Williams) move through the crypt by torchlight. They pass the statues of their parents, Ned and Catelyn (Michelle Fairley), the latter of whom we hear lamenting “this horror that has come to my family, all because I couldn’t love a motherless child,” right as Sansa passes her likeness. Catelyn is referring to Jon, of course, the bastard of Winterfell, and now one of the few remaining hopes for the survival of everyone in the Seven Kingdoms. When Jon passes Ned’s statue, he hears his father’s voice telling him, “You are a Stark,” reminding us that even in the afterlife, the Stark family continues to quarrel with themselves and one another. The Starks have always been GoT‘s most introspective family, Tyrion Lannister notwithstanding (Peter Dinklage), which is partly the reason they’ve suffered the most. Thoughtfulness and honor aren’t traits that are richly rewarded in Westeros.

When the three remaining Stark children finally come together in the crypt, they stand before their very own statues, as pitch-black an omen as they come. We’ll leave the teaser’s kicker for you to see, but it won’t surprise you to know that it hints at the very crux of what the 8th and final season is all about—the battle between the living, led by Jon Snow, and the dead, led by the Night King. Perhaps most importantly, the teaser reveals the premiere date—April 14—which marks the beginning of the end of one of the biggest, most successful TV series in history. We already know the final battle is the most massive HBO (and likely any other network) has ever shot. This new teaser properly puts the focus on the Starks, GoT‘s first family, if you will, and gives you the sense that it seems unlikely they’ll all make it through alive.