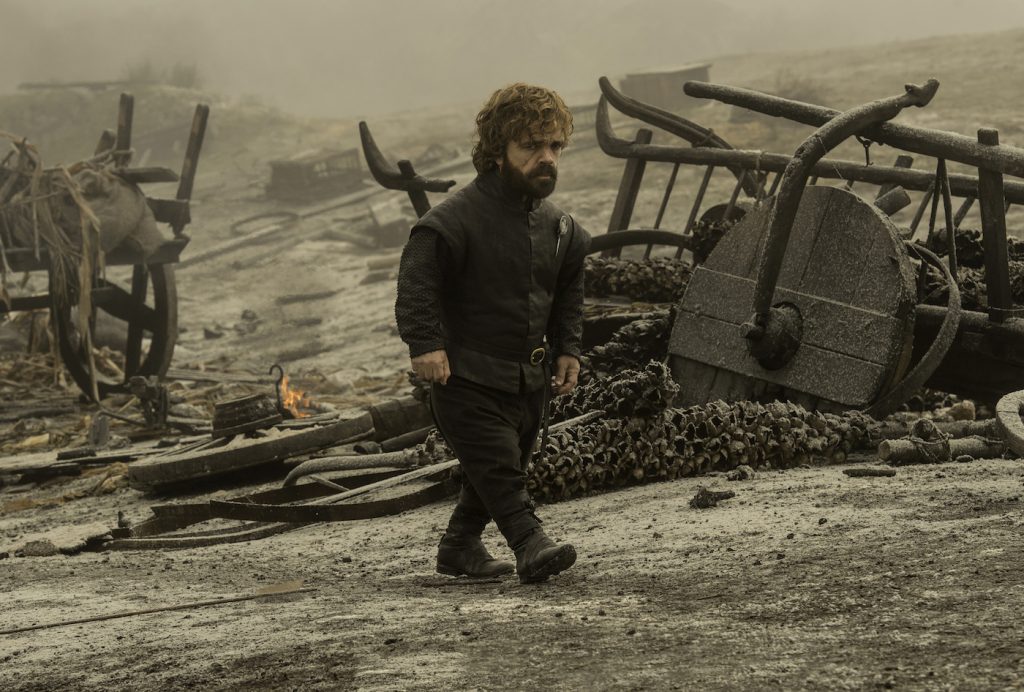 No, Peter Dinklage has not spilled the beans on how Game of Thrones ends. The man’s no fool, and considering he’s been one of the biggest stars on HBO’s biggest series, he’s not about to give away the game with but one (shortened) season to go. Dinklage was willing, however, to opine about how he feels about Tyrion’s fate, a character that has been, to a large degree, the stand-in for audiences around the globe, the one person in all of Westeros you actually might be friends with. In a recent conversation with Vulture, Dinklage discussed, among other projects, the end of GoT and his personal feelings on how they handled Tyrion’s conclusion. Dinklage measured his words carefully, and it while it’s doubtful he’d have expressed dismay if he actually didn’t like what showrunners David Benioff and D.B. Weiss had come up with (to say nothing of whether or not George R.R. Martin clued them in how he‘s writing Tyrion’s send-off in his long-awaited “The Winds of Winter,” the sixth book in his “The Song of Ice and Fire” series upon which Game of Thrones is based), Dinklage sounds happy. And cryptic:

“I feel very, very — I’m trying to find the right word. I think he was given a very good conclusion. No matter what that is — death can be a great way out.”

When it comes to Game of Thrones, we know that anyone can die at any time, but Tyrion has been one of the few characters—along with Daenerys Targaryen (Emilia Clarke) and Jon Snow (Kit Harington) that have felt, if not protected, then at the minimum essential to the overall arc. In season 8, however, all bets are off. The Great War (read; Winter) has finally come, and the battle between the living and the dead will likely bring a death toll that’ll make even hardened GoT fans blush. Will Tyrion really die in the end? It’s very likely, as it’s likely that just about everyone will die, but if you had to place your bets on who might live to see whatever comes after the Great War, Tyrion would be a decent wager. The man’s survived countless attempts on his life, and his cunning and intelligence are more or less unparalleled in Westeros. Dinklage himself concurs:

“[Tyrion] certainly developed a deeper sense of responsibility over the course of the show. He was a pretty irresponsible character to begin with. He used his position as the outcast of his family like an adolescent would. He pushed it in their [the Lannisters’] faces. The beauty of Tyrion is that he grew out of that mode in a couple of seasons and developed a strong sense of responsibility. Not morality, because he always had that, but what to do with his intelligence.”

As for his last day of filming, you’ll be unsurprised to know that it was an emotional experience.

“It’s always anticlimactic for the character’s last day. Nothing is shot chronologically, so you don’t get some big mountaintop scene or anything. It’s just, ‘That’s a wrap on Peter Dinklage.’ But as anticlimactic as it was, my last day was also beautifully bittersweet. A lot of people whom I love were on set that day. Even if they weren’t working, they came to set, which was beautiful. I tried to do the same thing when other actors were wrapping out. If it was their day, you would go to set to say good-bye. It was really hard. I won’t say their name or their character’s name, but one of the young people on the show wrapped this past season and everybody was a wreck. This person had grown up on the show, you know? They were a child and now they were an adult. And then they’re done. It’s like we were witnessing this person saying good-bye to their childhood. I know Game of Thrones is just a TV show, la-di-da, but it was our life.”

We think we know who he’s talking about:

HBO is not done with Game of Thrones even as the show nears its eighth and final season—we’ll be traveling back in time in at least one prequel series to see what the seven kingdoms were like long before the Starks and the Lannisters were around.