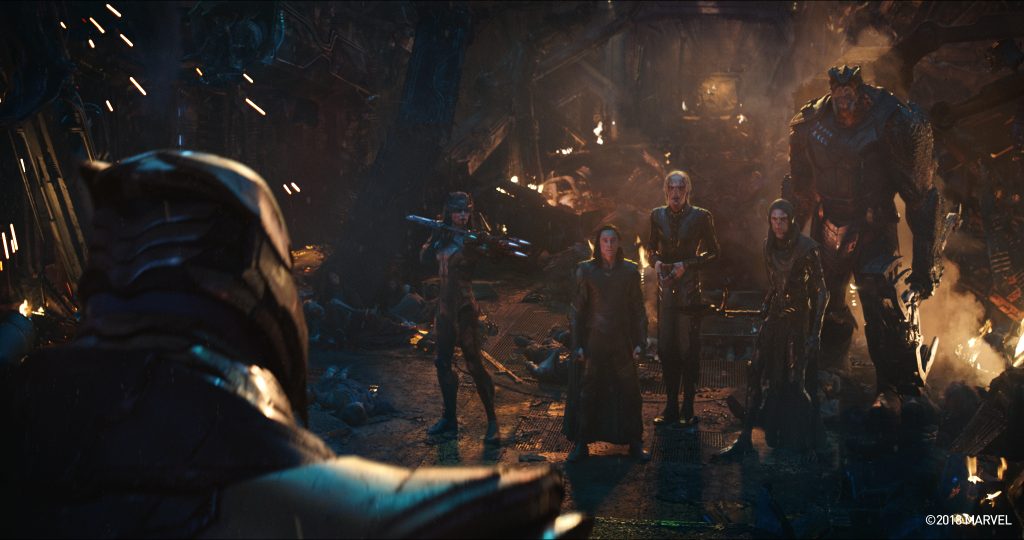 We’ve shared German digital studio RISE’s VFX reel showcasing how they created Avengers: Infinity War‘s devastating (but slightly hopeful!) post-credits scene. We’ve published Weta Digital’s VFX reel that gave us a glimpse of how they constructed that epic battle on Titan. We’ve also given you a look at how Framestore built Tony Stark’s brand new nanotechnology-powered Mark L Iron Man suit. This is all part of the bonus material boon that attends Infinity War‘s release on digital download and Blu-ray, and there’s more great stuff to see. These VFX reels are all being published by the various digital studios that Marvel and the Russo Brothers tapped to help them build the biggest film in MCU history.

The latest reel comes courtesy of VFX studio Cinesite. This video reveals how they created the film’s scariest villain not named Thanos. We’re talking about Ebony Maw, the well-mannered lunatic (voiced to sadistic perfection by Tom Vaughan-Lawlor) who is the first person we hear speaking in the film. You remember, he’s the alien gentleman telling the soon-to-be-murdered Asgardians to feel lucky they’ve been “chosen” by Thanos to die. He’s the one who goes on to torture Doctor Strange. Ebony Maw is one of Thanos’s “children,” capable of manipulating any object around him in ways that would make even Magneto blush. In the torture sequence, Maw is attempting to get Strange’s Time Stone by way of sending dozens and dozens of blades into his face and body. Maw would have killed him were it not for Spider-Man’s pop culture knowledge and Iron Man’s blasters.

Cinesite’s VFX supervisor Andrew Morley, working out of the firm’s London studio, led the charge to create some of the film’s “most thematically important and technically difficult CG shots and characters,” as their YouTube description reads. These included Ebony Maw’s torture of Doctor Strange, Spider-Man’s incredible new Iron Spider suit and the Avengers’ first encounter with the Guardians.

Featured image: Thanos’s “children” are the extremely powerful Black Order, who are a match for the Avengers. Courtesy Marvel Studios.