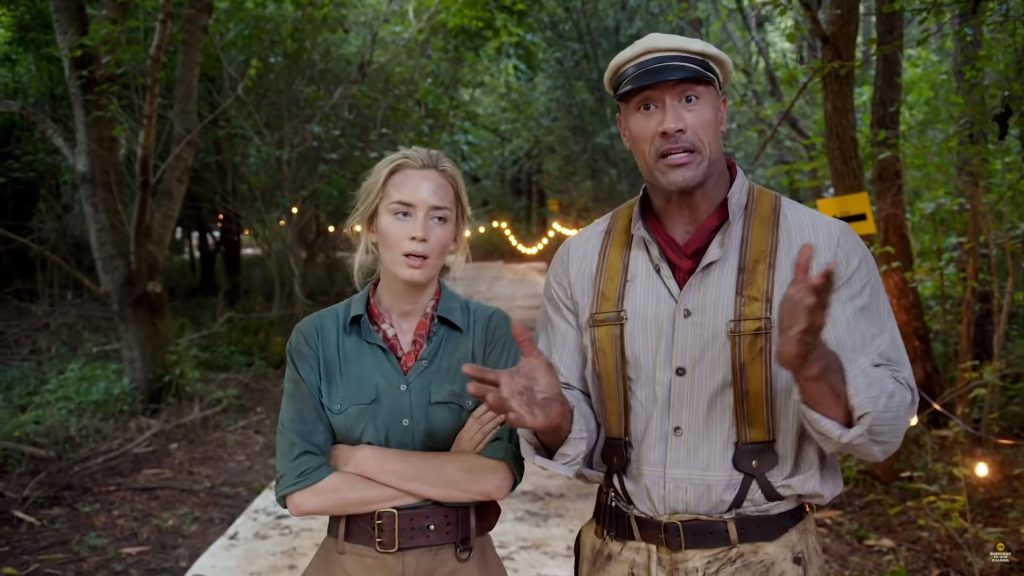 After the Pirates of the Caribbean franchise proved that theme park rides can inspire great filmmaking, Disney will adapt possibly its most iconic ride for the big screen. Co-stars Emily Blunt and Dwayne Johnson appeared in the first teaser for Jungle Cruise, loosely based on the Disneyland and Magic Kingdom ride. The clip is really just a minute of hilarious banter between the stars, with Johnson joking that they can be like “Humphrey Bogart and Kathleen Hepburn,” and Blunt even walking off stage when Johnson steals her line. While neither are in character, so much of this film will hinge on the chemistry of the stars, and this clip gives us high hopes for what this film could be.

Directed by Jaume Collet-Serra (The Shallows, The Commuter), the film will have Johnson playing Frank, the captain of a boat, who journeys with Lily Houghton (Blunt) and her brother (Jack Whitehall) to uncover a tree with healing powers deep in the jungle. While we don’t know much else about the plot, Johnson and Blunt told us that the film is a “love story,” so it’s possible their chemistry could get steamy on screen — as much as a Disney family adventure would allow, of course. Johnson’s comedic timing also should be an asset here, since the ride was made famous for its improvising boat captains telling corny dad jokes while at the wheel. Blunt’s introduction in the trailer even harkens back to those tour guide-y vibes. It’ll be interesting to see just how faithful the film ends up being to the iconic ride that inspired it.

It wouldn’t be a great Disney adventure without a couple great villains. Edgar Ramirez (The Assassination of Gianni Versace: American Crime Story) and Jesse Plemons, who absolutely stole the show in Game Night earlier this year, will play our heroes’ counterparts. With that all-star cast, iconic premise, and great chemistry among the stars, I can’t wait for Jungle Cruise to set sail.