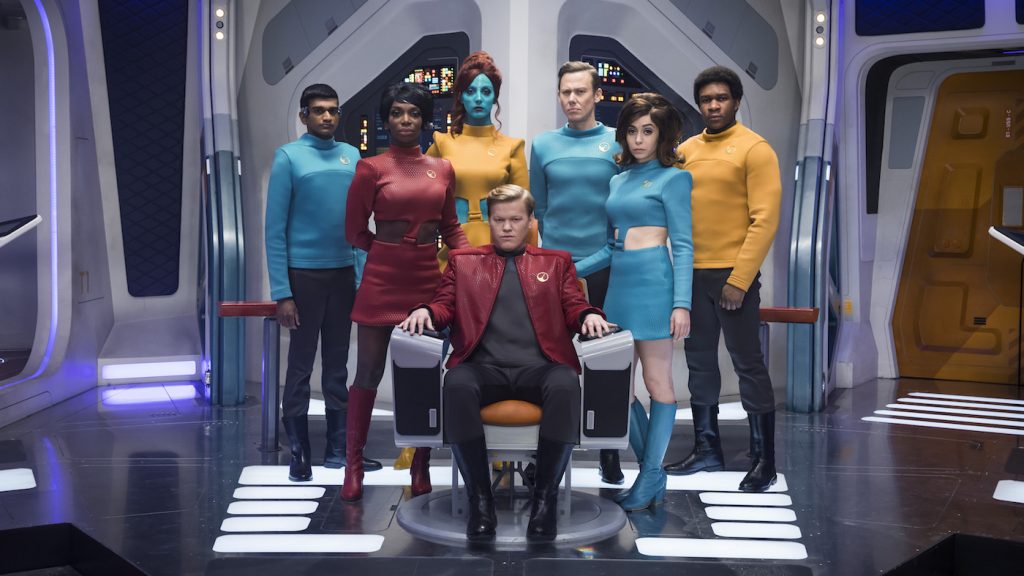 Each episode of Black Mirror is designed to be memorable in its own way, but none so far have spun what appears at first to be a mere goofy period romp into an emotionally complex depiction of covert malevolence quite like the feature-length opener of the show’s fourth season, USS Callister. Brilliant but overlooked Robert Daly (Jesse Plemons, once the beloved Landry of Friday Night Lights) is the creator behind an online gaming world for which his savvier, more personable business partner, Walton (Jimmi Simpson) has sucked up most of the credit. Daly, jostled off a crowded elevator and mostly left to fester in his private office, is set up as a textbook case of nice guys finish last, until we see him head home to his sterile abode and clock into his private version of the immersive game he created.

Daly puts on a headset and returns to the bright, 1960s-era space ship he commanded in the episode’s opening scenes. It’s no fantasy. In a seemingly unreachable corner of the computer program, using pilfered DNA, he has replicated real-life rude subordinates, a useless intern, and Walton, as game character clones who are totally cognizant of their situation, and totally trapped. When Daly brings in a new girl from work, Nanette (Cristin Milioti), for whom he harbors awkward, unspoken feelings, the “crew’s” fate under tyrant Daly begins to turn around.

The episode, which was directed by Toby Haynes, toggles back and forth between the game’s vintage interpretation of space travel and Daly’s office and apartment, set sometime in a somewhat slicker future. USS Callister completely avoids the pitfalls of many a space-set drama, wherein scenes trying to present human conflict seem to so often wind up competing with a) an asteroid b) other ships c) endless and scientifically improbable explosions d) loud aliens in bad moods, or some combination thereof. To get both the main space aesthetic right — which many fans likened to old Star Trek episodes, although the similarities end there — as well as a suddenly updated version the main characters are plunged into at the end of the episode, the show’s visual effects took an obligatory backseat to the unfolding human crisis aboard the ship. We spoke with Russell Dodgson, VFX supervisor for the episode, about setting the tone.

Black Mirror is admired for setting itself apart so distinctly from other sci-fi/tech-horror shows or films. How do you take that into account when approaching the visual effects?

It’s tricky, because with Black Mirror you’re kind of picking up on a legacy of a show that has come from a very lo-fi beginning. Even in its earlier days, when it didn’t have a big visual effects budget, it always managed to deliver a very impactful narrative. So if you look at [episodes] at the beginning, Joel Collins, the production designer — he has worked on all the episodes — he’s taken it from this really small, almost cottage industry sort of TV show, all the way through to this thing that now is much more sprawling and has a greater budget for production design and visual effects.

So what’s interesting is you’re stepping into this kind of legacy, but you’re suddenly doing the first show that’s set in space that has a fairly decent VFX budget for doing the shots that are required. But actually, the biggest thing is restraint. And it’s easy, when you’re working with Charlie [Brooker, the show’s creator] and Toby, the director, because Charlie cares about how the audience feels, all the time. He’ll be more interested in that than he is about the technique of visual effects, which for us is great, because we just want to help support the story. And Toby, he’s a very ‘actor’s director.’ So, for us, it’s restraint, and it’s trying to find the shot that will work and complement a scene’s flow but doesn’t overpower it, that doesn’t make it a sci-fi space romp. Because that’s not the point of the show. The show is about psychology and this really strong female character. And you know, this really overly controlling, terrifying man who’s playing out a fantasy. That’s the point of it, the VFX is not the point of it.

Did you wind up creating aspects of Robert Daly’s real life in VFX?

Not tons. There’s a lot of screen work and screen replacement work in there, and again, that’s really supportive of the story. It’s one of the things that helps things flow and the beats go on. We did a bit of work on the scanning machine [which Daly uses to scan his victims’ DNA and recreate them in his game], just making that feel it was operating. But no, it’s very real world.

In terms of other aspects of the episode, like the set and some of the costumes, there are a few overt comparisons to Star Trek. In terms of the effects, however, where did you look for inspiration?

There’s a big trove of references to look at. Sometimes getting too engrossed in that gets to be a bit of a trap. Because you end up realizing that without knowing it, you’ve made a shot from another show. What we did was we looked at 1960s sci-fi art and book covers quite a lot for space. Funny enough, we’d just come off doing Guardians of the Galaxy. And we were very clear that we weren’t making Guardians of the Galaxy space. We said, ‘it’s not original Star Trek space. It’s not J.J. Abrams space.’ It’s something where the color, the tone, the feel, and the lines of space make you think of something a bit more 60s-ish but it still feels kind of premium, and like a 4K video game now. It’s one of those things that although not incredibly complex, it takes a lot of versions and a lot of playing to get to the point where you feel comfortable and happy.

One of the things we were really keen on was trying to make sure that the way space looked, when you were inside the bridge of the ship, reflected the emotional beat that was happening inside the ship. Whether or not it’s really clear to the viewer, it just becomes part of the set design. So when Daly’s really angry, there’s this big boiling red kind of space outside. When Walton is about to have his son thrown out of the airlock, he’s looking at a planet being shattered, just like his world’s going to be. It was just tiny little nods to the emotional beat, that don’t overpower it.

Then all the other things, the space shots and asteroid scenes, technically they’re quite heavy lifting visual effects for a TV show, but really, the end result is always finding something that keeps the flow of it, and doesn’t become about the effects.

The end of the episode seems happy, but many have interpreted it otherwise. What do you think?

I would say, that if you think of the Black Mirror catalogue of work, and the [episodes] that are incredibly depressing and make you wish you’d never watched them, really, because it’s so heart-rendering, and then things like San Junipero that are so uplifting, this is a good one. Because it does leave you in a slightly weird place where the music and everything soars, it’s triumphant, but they’re still stuck in the video game world as humans, or feeling like humans, and that guy is still dying, sitting in his chair. You don’t really hate Daly at the end, you just kind of feel bad for him.

And it does pose that really interesting question of morality. If you think about what people play now, things like Grand Theft Auto, and they have the ability to play the game or suddenly go around spending the entire time stabbing pedestrians, in the game, it is weird. And it’s that kind of Pandora’s box, that if you have this open world, what do you use it for and who do you become? What does it mean morally if it’s virtual? I think, part of you thinks of them as people, part of you sees them as not really real. You know that Daly’s not really a real person [in the game]. It’s very complex. When I watched it, finally, the music and the tone of it all made me go like, yes!, but also, whoa. It’s a good world to consider.

Will you be working on further Black Mirror episodes?

We have been discussing. They’re shooting some now, I believe. Obviously if one of them comes our way we’re all super excited to hop on it. It’s a really nice family of people to work with.