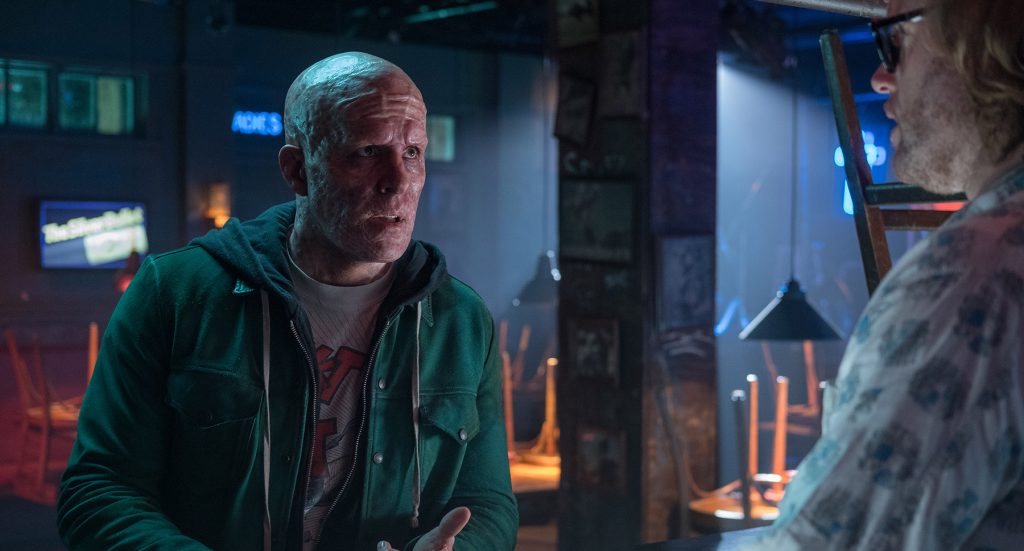 Yesterday we shared Deadpool 2‘s Lisa Frank inspired IMAX poster, and now a new IMAX promo has arrived to remind viewers that when it comes to seeing Deadpool in the theater, size does matter.

Like nearly all of the Deadpool promos since the first film bowed, and broke records, in February of 2016, the Merc with the Mouth (Ryan Reynolds) is addressing you directly. “Here’s what I look like on a pathetic regular screen…” and then voila, he claps his hands together and reveals himself in the colossal majesty of IMAX…(just watch the promo to see how this is precisely what doesn‘t happen). It’s yet another classic bit of irreverent Deadpool marketing, which has managed to make even the perfunctory “go see this theater in IMAX” promos that attend every movie of this size new and funny.

Here’s what we know thus far about the actual film: Deadpool (Reynolds) is tasked by Vanessa (Morena Baccarin) to protect this kid named Russell (Julian Dennison) who may or may not have special powers. The reason he has to protect him is because a time traveling cyborg named Cable (Josh Brolin) wants Russell dead, for some reason. Cable is A LOT. Deadpool realizes he’ll need help if he’s going to beat Cable, so he goes about setting up a superhero team (we’ve heard of this method before) that he’s calling the X-Force. He gets some seriously promising recruits, like the luck-manipulating Domino (Zazie Beetz), as well as some…less promising recruits (we still love you, Peter.)

Yet this barely scratches the surface of whatever the actual plot is. We know there’s all sorts of cool characters involved in this film, and that, eventually (we think), Cable will cease being Deadpool’s enemy, considering he’s lined up to be leading the X-Force in an upcoming film. We’ve heard that Jack Kesy (The Strain, Baywatch) is playing the film’s central villain, which might be the Irish mutant Black Tom Cassidy. We also know that Shioli Kutsuna is involved, Terry Crews is playing Bedlam, Lewis Tan is playing Shatterstar, and Pennywise himself, Bill Skarsgård (yeah, the gent who scared your pants off in IT) is on board.

Still unsatisfied? Okay, here’s Deadpool 2‘s “official synopsis”: After surviving a near fatal bovine attack, a disfigured cafeteria chef (Wade Wilson) struggles to fulfill his dream of becoming Mayberry’s hottest bartender while also learning to cope with his lost sense of taste. Searching to regain his spice for life, as well as a flux capacitor, Wade must battle ninjas, the yakuza, and a pack of sexually aggressive canines, as he journeys around the world to discover the importance of family, friendship, and flavor – finding a new taste for adventure and earning the coveted coffee mug title of World’s Best Lover.

Along with Reynolds and Baccarin, your returning Deadpool stars include Leslie Uggams as Blind Al, Brianna Hildebrand as Negasonic Teenage Warhead, Karan Soni as Dopinder, and Stefan Kapicic as the voice of Colossus. The film opens on May 18.