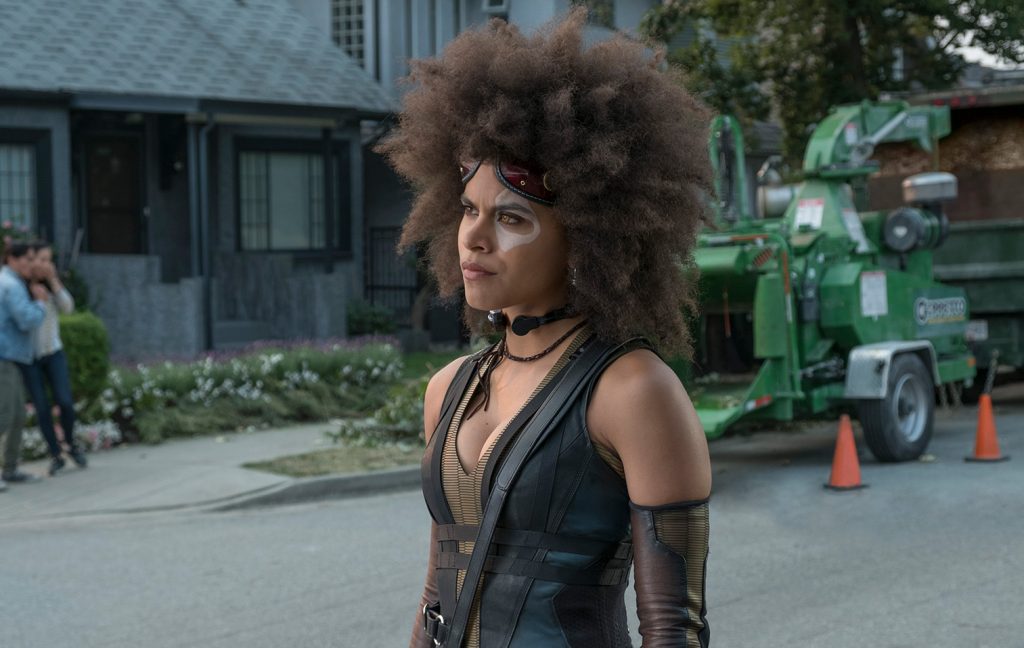 We shared this adorable Deadpool 2 IMAX poster earlier today, but now its time to show you some footage from the actual film, focused on Zazie Beetz’s mutant assassin Domino—and its glorious. Thanks to a partnership between T-Mobile and Fox, T-Mobile CEO John Legere got his hands on the clip, which he promptly shared on his Twitter feed. The half a minute worth of action is centered on Deadpool (Ryan Reynolds) and Weasel (TJ Miller) interviewing potential candidates to join the X-Force, Deadpool’s new superhero super-team. This is where we meet Peter (the fantastic Rob Delaney), a super swell guy without any powers but who, incredibly, is enlisted to join up anyway. Zazie Beetz’s Domino, however, is the star here, and she absolutely has superpowers (despite a, surprise, argumentative Deadpool). The clip Legere shared shows her in all her mutant glory, including a never-before-seen sequence of her fighting Cable (Josh Brolin). Spoiler alert: Domino wins.

While Deadpool is adamant that Domino’s “luck” isn’t a superpower, he’ll learn soon enough that he can’t live without her (literally). Her skills are on full display here, and perhaps the only thing more impressive than her moves is her nonchalance. The Negasonic Teenage Warhead (Brianna Hildebrand) may be the most powerful teenager in the Deadpool franchise, but she’s now got company when it comes to butt-kicking in style, and without a lot of jabbering about it (see; Wilson, Wade).

From test screenings earlier this year to a recent screening in Los Angeles, there’s unanimous consent that Beetz will likely be the film’s breakout star. She’s sensational on Donald Glover’s hit FX series Atlanta, and now that’s she in a film of this size, you can expect to see Beetz’s star rise, as well as her Domino become an even bigger player in the Deadpool and X-Force films to come.

Take a look at this exclusive world premiere clip I got from @deadpoolmovie & meet the newest member of Deadpool’s “super duper” group (they need more magenta)! Domino is lucky & you can be too! Test your “super power” each week until 5/15 for chances to win epic Deadpool prizes! pic.twitter.com/oJo9QG3IeG