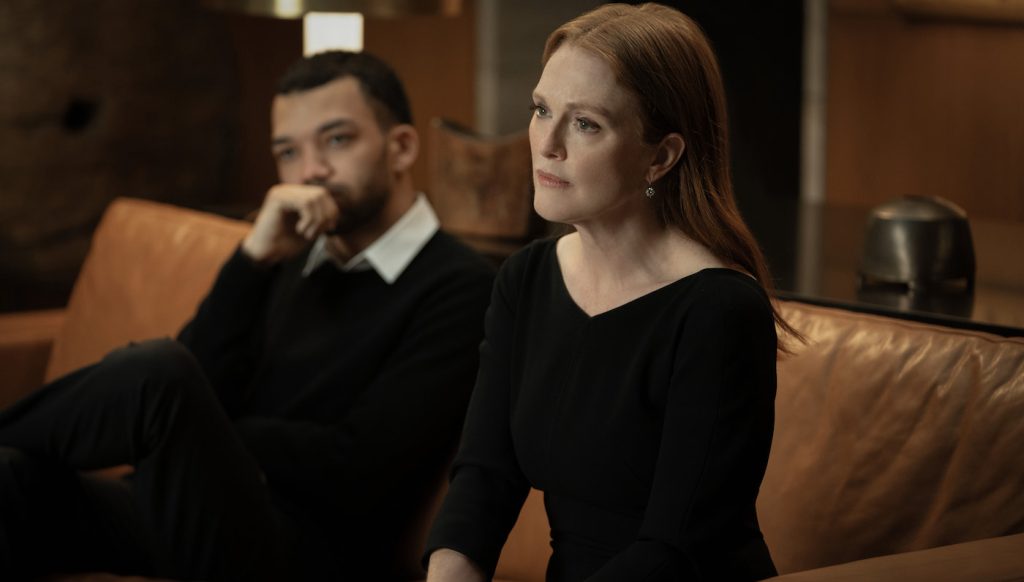 The first trailer for Sharper is here, revealing director Benjamin Caron (Andor, The Crown)’s neo-noir thriller, and we’re getting some delicious vibes. Sometimes there’s nothing more satisfying than a good heist film, one that pits ambitious grifters and mysterious shape-shifters against the ruthless rich. And in the case of Sharper, these archetypes are embodied by some terrific performers.

Meet Richard Hobbes (John Lithgow), a Manhattan-based billionaire with money to burn and games to play. The trailer opens with Richard and Madeline (Julianne Moore) finding a man trying to rob his penthouse. That would be Max (Sebastian Stan), a seemingly hapless thief who not only failed to pull off the crime but to Richard’s amazement, hadn’t set his sights high enough. “If you’re going to steal,” Richard says to him, “steal a lot.”

Thus begins a strange cat-and-mouse game with Richard dropping the charges against Max in return for…something. The trailer keeps the story, written by Alessandro Tanaka and Brian Gatewood, safely tucked away. What we get mostly is moody impressions of what’s to come, with Richard, Max, Madeline, Richard’s son Tom (Justice Smith), and Sandra (Brianna Middleton) embroiled in a dangerous game of grift. Who’s playing who will be one of the central questions posed by Sharper, a word, by the way, that means a swindler. Are Max and Sandra playing the embattled Tom (the trailer reveals a major rift between father and son)? Is the relationship budding between Sandra and Tom real? And is the billionaire Richard Hobbes pulling all the strings or getting played himself?

Check out the trailer below. Sharper hits select theaters on February 10 and streams on Apple TV+ on February 17.

Here’s the official synopsis for Sharper:

No one is who they seem in Sharper, a neo-noir thriller of secrets and lies, set amongst New York City’s bedrooms, barrooms and boardrooms. Characters compete for riches and power in a high stakes game of ambition, greed, lust and jealousy that will keep audiences guessing until the final moment.