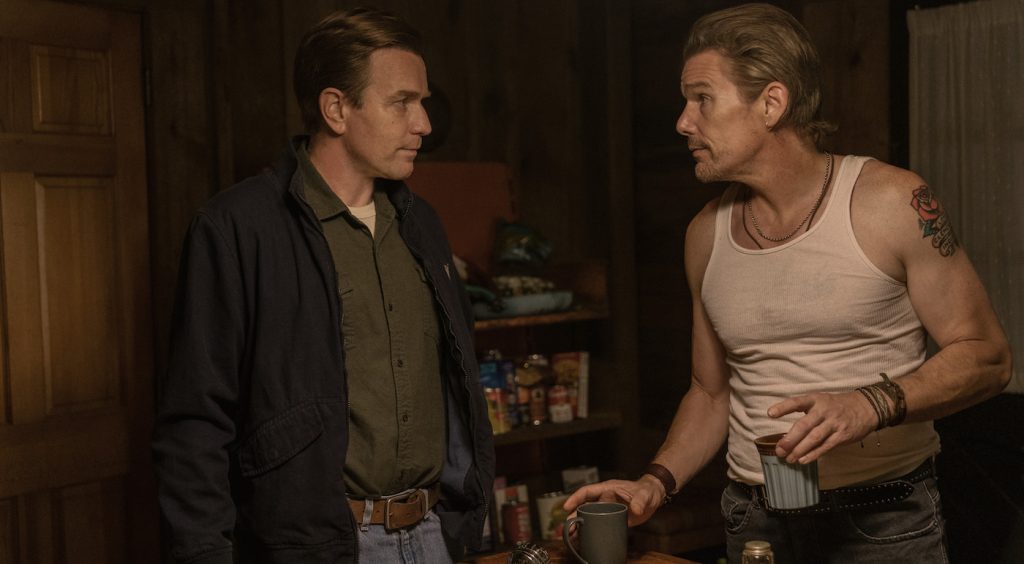 Writer/director Rodrigo Garcia‘s initial idea for Raymond & Ray was simple—a trumpet player is digging his father’s grave—but something wasn’t quite working. “I can’t even remember if the digging of the grave was his idea or the father’s requirement,” Garcia admits, reflecting on the first draft of what would become his surprisingly funny, raw look at father/son relationships in his new Apple TV film. “The reverend was there, and a woman showed up with a child, but I couldn’t expand the script past a half-hour short.”

So how did Garcia eventually find his way to a story about two half brothers, Raymond (Ewan McGregor) and Ray (Ethan Hawke), who are thrust together after an unusual request by their estranged father, Harris (Tom Bower), to dig his grave? He kept going toward where the pain was. “You gotta go where it hurts,” Garcia later reflected, and the result is an unusual and unusually satisfying look at how two distant brothers with little to nothing in common come together over a common cause, even if that cause is to bury a man they both detested.

We spoke to Garcia about crafting this intriguing character study, which is led by unsurprisingly deft performances from McGregor and Hawke, and then bolstered and expanded by some delightful turns by Maribel Verdú as their father’s last fling, Lucia, Sophie Okonedo as a nurse, Kiera, who befriended him.

So the fellas have the same name. How did you strike upon that idea?

When it later occurred to me to expand the script [from one man digging a grave to two] and that they could be half brothers, which obviously immediately multiplies everything. And then I had the idea that they were given the same name, which is, you know, crazy enough, although not unheard of. Certainly, in Mexico, I’ve heard of it. Men who have two secret lives would give their sets of children the same name so as not to have to remember two different ones.

What made you gravitate towards centering the story around this ritual burial?

It’s very easy to approach stuff about funerals and surround them with human follies. Funerals are so incredible, anyway. Just the fact that somebody dies can be mind-blowing. Wow, they’re no longer here. There are these rituals and the heightened tensions, all of which I picked up while working on Six Feet Under. That’s something Alan Ball exploited very well. I knew I had to take the guys to very extreme places.

The chemistry between the two brothers is fantastic, which is unsurprising, given the actors involved, but I’m curious how it was for you, having lived with these characters on the page for so long.

A lot of the humor comes from what Ethan and Ewan brought themselves, The stuff that’s in between the lines, the way they look at each other, provoke each other, rib each other, riff off each other, judge each other, feel judged by each other. All of that brotherly stuff that siblings do. There was humor in the script, but they definitely heightened it. And then, obviously, they had two different mothers and are different people, but you do believe they’ve got this shared history. They both know what it means to be the son of Harris. They both tapped into two things that, for me, were essential. Raymond, with his mantra that forgiveness is good and let’s forgive our father, which denies his feeling. And Ray, who’s a little more jaded and a little bit more feeling like their father was a bastard and that he’s over it, also denies his feelings.

You’ve done a lot of films focused on female characters, like Nine Lives, and here you’re exploring these two brothers, and you seem to be having a lot of fun with them. I’m curious if you made a conscious decision to interrogate masculinity or male characters in general?

Well, I think what happened is I did a lot of movies where the central characters were women, but a lot of that wasn’t about offering my take on womanhood or femininity, but because I always felt I could write the female characters better. They were more detailed and differentiated from one another. The men I initially wrote were all kind of variations of myself, but with time, I got better at writing guys. You gotta go where it hurts. It wasn’t so much about the scrutiny men are under right now, which is deserved, but the way men deny their feelings, which is where the pain and bad behavior that we’re talking about comes from. It’s from men not being in touch with themselves.

You have to go where it hurts feels like a good lesson for screenwriters and writers in general.

Your writing reveals you. Even when you write genre—Guillermo del Toro has said that he’s the monster. He can’t write a movie without a monster. I think part of the satisfaction in his movies, certainly for him, is that they’re so personal. When I’m teaching at the writer’s lab at Sundance or mentoring someone, I ask, ‘Where are you in this? Where’s the personal stuff?’ This doesn’t mean you have to tell me your life, but show me what stuff makes you uneasy. Often I can see that the script is stunted in the directions where they’re going to hurt you more as a writer. You have to go where the script is scary.

Once you cast your actors, how do you let go of the character you wrote on the page to let the actor inhabit the character in a way that might be different from how you imagined them?

If an actor passes on a script, it’s heartbreaking for me. I’m always scared an actor is going to say no, and then when they say yes, there’s a day or two of terror because now that’s who the character is going to be, you know? No matter how wonderful the actor is, it’s like the end of imagination. Now Raymond is Ewan McGregor, and Ray is Ethan Hawk. But after that initial shock, I embrace it, and it’s wonderful. They are then part and parcel, they fill in the holes, and they do everything that’s not in the script. The script is actions and words, and they do the reactions, which tells you a lot about who someone is.

You know going in that those guys are going to be compelling, but you surround them with some really wonderful performers in the surrounding cast. Let’s talk about them.

The love interest, as it’s called in our industry, it’s an opportunity to unravel those guys even more. The two romantic interests—Lucia, played by Maribel Verdú, and Kiera, played by Sophie Okonedo—allows me to see what the guys might be outside of their problem, and Maribel and Kiera did wonderful work. I always thought that Lucia was a Hispanic American or Latin American who could hold these contradictions, to appear frivolous but to really be very wise, and to appear maternal but also be very sexual. And Maribel is able to communicate all those contradictions with a lot of humor and charm. And Kiera, I always thought was very smart, very grounded, working with people as a nurse who are dying, she’s on the front row of real life. There’s a no-illusions quality to her, but she needed to be sensitive enough to fall for the wounded bad boy. And Maribel and Sophie Okonedo brought not just humor but humanity.

We often think of our parents as these fixed entities, and there’s a very narrow band of who will imagine they are. In your movie, the two Ray’s think of their father as just a very bad dude. But then they meet these other people, and these people know a different guy.

It’s the old question, do you ever really know your parents? People are different with different people, especially people they’re not related to or in love with. As Lucia says, Harris was a racist who liked everybody. He was a prick, and he was a people person. And also, it’s possible that Harris could have mellowed out, as sometimes people do in old age. Sometimes people harden, but sometimes they mellow out with old age. I don’t know whether his desire for them to dig his grave is a reward or a punishment. And we’ll never know.