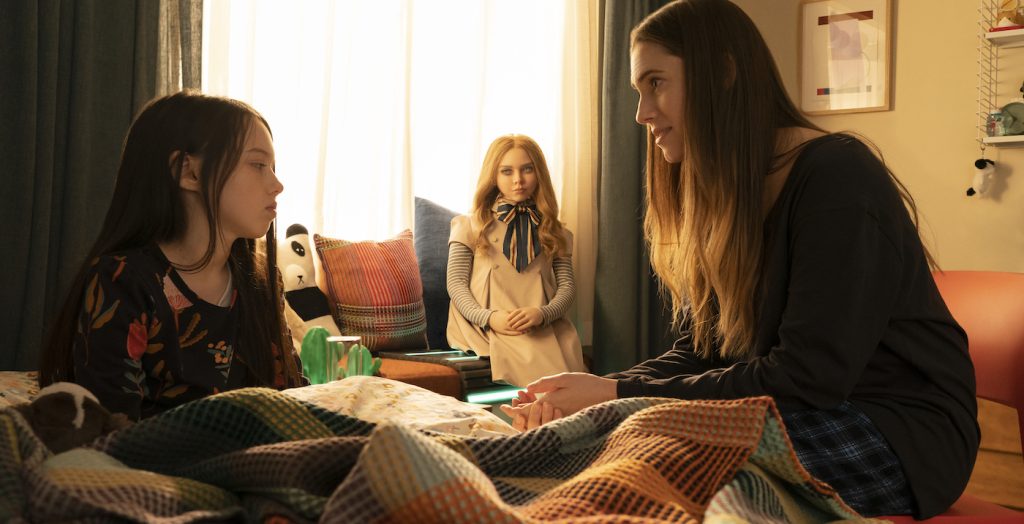 There’s a new murder-doll on the scene, friends, and she’s fabulous.

The reviews are in for the toy robot run-amok horror film M3GAN, and for those looking for a campy, creepy jolt to start your year, you’re in luck—the film is getting some stellar notices.

Director Gerard Johnstone’s film (from a story by horror master James Wan and a script from Akela Cooper) centers on a brilliant robotics engineer named Gemma (Alison Williams) who creates an A.I.-backed toy robot for her recently orphaned niece, Cady (Violet McGraw). Gemma hopes that the robot will be a comfort to the grieving Cady. You can imagine how well this works out.

“It’s only the first week of January, but we already have one of the best villains of 2023,” says critic Perri Nemiroff about M3gan, the robot that Gemma has tasked with the job of protecting Cady “from harm, both physical and emotional.” The problem is that M3gan will start to see threats to Cady’s physical and emotional health everywhere, and that’s when the murdering starts.

M3GAN doesn’t shy away from the absurdity of its premise—and why should it? We’ve had killer dolls aplenty in horror classics of the past, from Chucky to Annabelle to the doll in Poltergeist that first ignited James Wan’s fascination with the life-like killer toys, smiling as they slaughter. But for M3GAN to work, well, the toy robot M3gan has to work, and it appears that Johnstone and his creative team have nailed that assignment. The doll delivers the creeps and the laughs.

“This is an excellent character, unhinged in the best sense of the word and flamboyant about it, too,” writes Newsday‘s Robert Levin.

“Hold onto your wigs, because the next queer monster has arrived, and she’s got better rhythm than the Babadook,” says Mashable‘s Kristy Puchko.

“Johnstone’s film captures the same alchemical blend of heart, humor, and havoc you find only rarely, in crossover classics like Gremlins, and it yields more entertainment than most would-be blockbusters,” writes The Wrap‘s William Bibbiani.

“Its creators are so clearly on the same insane wavelength, nimbly blending camp and social satire and actual terror, that M3GAN is poised to crack the murder-doll pantheon and stay there forever,” writes indieWire‘s Kate Erbland.

It’s not easy blending camp, genuine creepiness, and actual thoughts on grief and trauma. But it sounds like M3GAN has pulled it off.

#M3GAN // #M3GANMovie is a goddamn RIOT. Bonkers and brilliant. Finds a smart balance of camp and sharp sentiments about grief, trauma & tech over-reliance. Houses the best needle drop (on piano!). Violet McGraw is a powerhouse. Built for repeat viewings. pic.twitter.com/o4qSp8Uawr

For more on M3GAN, check out these stories: