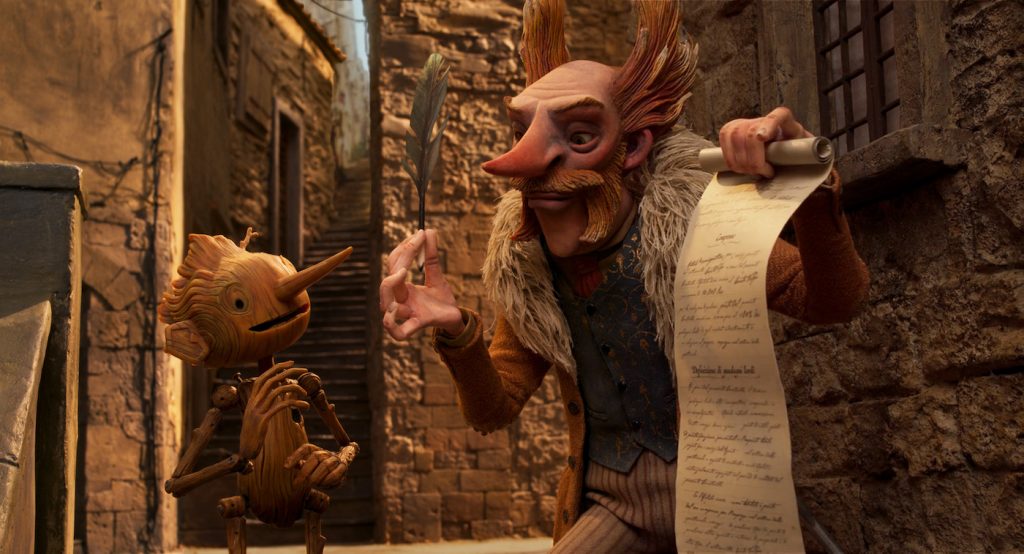 As the Wood Sprite (Tilda Swinton) grants Geppetto’s (David Bradley) grief-stricken wish to bring forth a son from his wood carving, Guillermo del Toro’s Pinocchio draws life where there are only puppets and sound where there is only silence. The hearty revamp of Carlo Collodi’s classic is so engrossing, you may not recognize the meta miracle the movie accomplishes in an inanimate world. However, there are endless marvels to be seen and heard.

Sound designer/supervisor Scott Martin Gershin developed a sound library that is as expressive as the film’s characters. “I have to give Pinocchio (Gregory Mann) emotion with sound,” he described. “At one point, he’s embarrassed – like he apologizes – and he does a cute wave. I could do a very delicate squeak that was so endearing to the moment. So, what you’re constantly doing is taking inanimate objects and trying to figure out how to make wood, rubber, and metal squeaks to give it emotion. To glue it to a picture in such a way that it’s not annoying, but it has personality.”

Nothing about the stop-motion movie is as straightforward as it may seem. Developing many of the sounds in a literal way will not yield the intended result. Matching the action with effective audio often requires creative solutions.

“It’s a puzzle. It’s a puppet. We gotta go get a puppet and record a puppet. Sounds like bowling pins,” Gershin recognized. “Well, we’re getting an old puppet. Well, old puppets don’t work. So now you have to start using your imagination. What does work?”

Instead, Gershin turned to a musically inspired source for Pinocchio’s wooden sounds. He contacted Paul Reed Smith guitars to acquire truly unique and handcrafted wood. But like the film’s hero, these “guitars” have no strings.

“I said, ‘I’ve got this crazy idea. I know when you guys cut the wood for guitars, you always have scraps. I’m wondering, can I get your scraps?’” Gershin recalled. “And [Paul] was like, ‘Sure.’ So he sent me fifty pounds of scraps. But it was all like Brazilian rosewood and mahogany and flame maple and very tonal wood.”

Gershin’s musical inclinations are reflected throughout his work. The dramatics of a well-composed piece are akin to the structure of a sonic arc.

“As a musician, I like things to phrase, and everything resolves,” Gershin described. “I sometimes go up to create tension because most times when you resolve on an up, it feels awkward. So, part of what I have to do is be an audio psychologist. I’ve got to push people’s buttons based on sounds.”

With his signature sound library assembled, Pinocchio was ready to set off on an epic journey through adolescence. The dark new vision from del Toro is the most daring interpretation yet, filled with monsters, a chilling reeducation camp, and even visits to a bureaucratic afterlife. Pinocchio learns and grows with an audio track that reflects his developing maturity.

“When Pinocchio is first created and born in the first 15% of the show, he sounds like he’s going to fall apart,” Gershin noted. “He sounds like if you hit him, it would sound like a bunch of Lincoln Logs. His nails are sticking out, and he looks very haphazard, and he looks fragile.”

Eventually, Pinocchio finds his wooden footing and even learns to dance. His innocence is endearing and unpredictably insightful. As his personality takes shape, Gershin fills out Pinocchio’s audio palette.

“But then, as he keeps talking and moving and then scenes go on, I start fading away that [fragility]. Now he becomes a character who you love. So, you start taking away the ‘it’ and turn it into the ‘he’ in a way that doesn’t force itself on the audience.”

Once viewers are familiar with the characters’ expressions, Gershin can manipulate them to serve the story. A return to form can be equally impactful as introducing a new element. A previous sound cue can speak volumes.

“There’s a time later in the film where [Pinocchio] is exhausted, and he’s being pushed beyond his limits, and he collapses, and I revisit the fragility that I introduced at the beginning,” Gershin revealed. “You want to remind the audience in ways that aren’t obvious. When you hear it, you should automatically go, ‘I know what that means. I know what that is,’ without having to think about it. You should just feel it.”

Gershin worked with foley artist Dan O’Connell to create the library of sounds that were used for the film. Gershin estimates that 99% of Pinocchio’s sound alone was recorded from scratch. Of course, not a single sound is organic in animation. Everything we hear must be added and is truly intentional.

“People just think there’s a microphone perfectly spaced, and they just think you record all the cars and the ambiances and the police sirens and all the newsrooms, and all of it is just there because the illusion works,” Gershin noted. “But the reality is, in many of these shows, I’m doing a thousand different audio tracks. There are thousands of sounds that go into a movie to make it feel like there’s no sound.”

Of course, all those painstakingly recorded sound effects rely on a counterpoint. Gershin says that the absence of sound can be just as powerful as an explosion.

“Part of what I do is deciding what sounds to put and what sounds not to. The loudest sound that I have is silence, especially in a theater,” Gershin reflected. “There are times the only way for me to get loud is to start with silence. Sometimes I can jolt you quickly. Sometimes I can build it up to a crescendo. Tension, tension, and then release.”

Your ears play a critical role in understanding the story the way the filmmakers intended. Sometimes audio reveals action offscreen or can even highlight the most important information you see.

“There’s given points of what we want to focus our eyes and our ears on because they work together,” Gershin confirmed. “Every time you watch a show, if you look to the left, you’ll hear that. If you look to the right, you’ll hear that. But you may not always hear everything because if you’re not looking at it, you won’t hear it. It’s this weird psychological effect.”

Gershin recognizes that no one audience member can take in all his work in a single sitting. Unbothered, he sees every piece of a film as being in service to the whole.

“A great film is a film that you watch, and you lose yourself. You buy the illusion.” Gershin said. “If you lose yourself in the story, all the crafts – the painters, the puppeteers, everybody who did it – they all disappear into the illusion. And that’s why we’re in it. To tell a story and create an experience.”