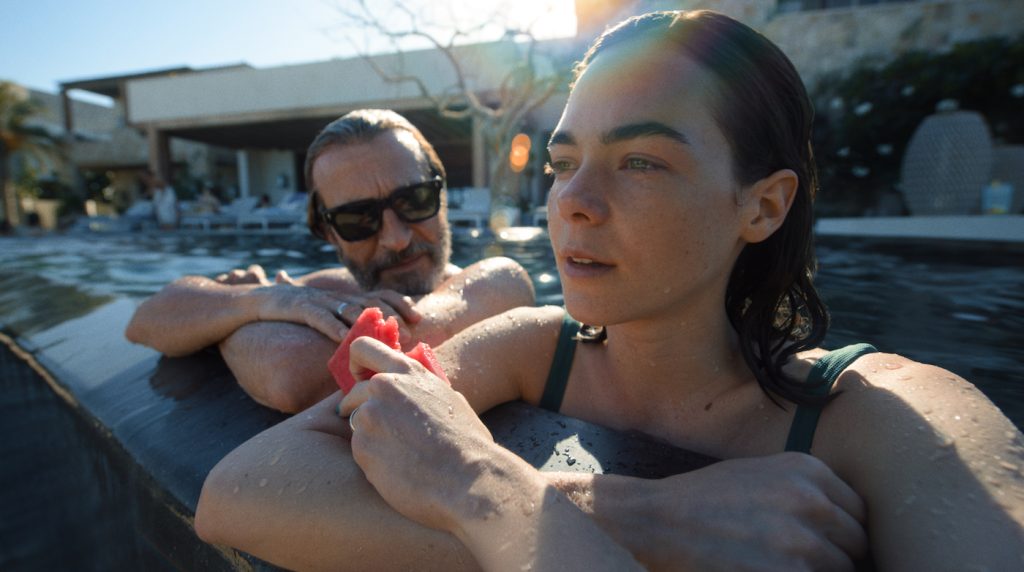 As with all films written and directed by Alejandro Iñárritu, the auteur’s new release Bardo: False Chronicle of a Handful of Truths is difficult to define or categorize. He himself has said it is his most personal work, but viewers who love it have felt their own powerful connection to elements of the story. Without question, it is a cinematic experience that goes beyond suspension of disbelief and calls for surrender from its audience. This is no surprise, given the name of the film, Bardo, is based on a word in Tibetan Buddhism for the state of existence between death and rebirth.

The movie follows acclaimed Mexican journalist and filmmaker Silverio (Daniel Giménez Cacho) in a series of experiences with his family, his environment, and his memories, that blur the lines between reality and fantasy. Iñárritu asked his performers to pull from the depths of themselves in bringing the roles they play to life, so much so that members of the cast have said it is hard to draw the line between where their characters end and their own identities begin.

The Credits spoke to Daniel Giménez Cacho and Ximena Lamadrid, who plays Silverio’s daughter Camila, about what aspects of the film have continued to resonate for them, that spectacular crowd scene in a Mexican dance hall, and, basically, the meaning of life.

The word bardo references a sort of in-between place. Many experience the immediate feeling of loss or grief as being in a world in between life and death. Sounds and colors are experienced differently. Everything slows down. Both Silverio and Camila are in between worlds. How did you both experience that?

Lamadrid: Bardo is that transition between life and death. It’s something being born, something dying. It’s really more that journey that everyone’s experiencing, and it’s shown in a very poetic and metaphorical way. I think for my character, she begins grieving her past, the past that never happened, in the pool scene with Silverio. She’s very nostalgic for something that never was, and begins in a quite melancholic place. At that moment, she’s grieving that past, she’s grieving the loss of her brother Matteo, who didn’t get to see life as she did. She’s also excited for a future. She’s thinking to move to Mexico and continue her journey, and maybe reconnect with her past and her roots. Then personally, me as Ximena, I lived that grief and that journey with her, because I have a similar experience in my life. I grew up away from home, and I didn’t get to Mexico until I was 22 years old, so I really related to that.

Giménez Cacho: I think that many, many interesting reflections come from the fact of facing that. If you are at that moment, then, of course, you reconsider all you’ve done. What were your deepest desires? Have you accomplished everything you wanted? Why did you have such a desire? Was it really yours, or was it a social construction, and then you started to desire that, and that’s not really you? It’s not who you really are. For me, I’m becoming anxious now that you realize all this mostly when it’s too late, only just when you’re about to die. That’s the case with this character, I think. Maybe he has a lot of revelations, but it’s too late.

Daniel, the scene at the dance hall contains moments of transcendence, and it’s captured in the poster, where Silverio is surrounded by family and friends. Could you talk about your experience of that scene and filming it?

Giménez Cacho: The first thing that I want to say is that the place where I’m dancing, it was such a huge construction of technique and Alejandro’s dream. You are aware that you’re dancing, and I have the image like I’m on an aircraft carrier, and they say, “Do your thing. Dance here.” But of course, you have to realize you are supported by an enormous structure. In that way, it’s also very familiar for me because I’ve been rehearsing that all my life. That kind of party I’ve done plenty of times.

Giménez Cacho: Yeah, me, as Daniel, in that place with the same people because all the extras were the people that used to dance in that place.

Lamadrid: It’s not a set. It’s an actual dance club that he would go to.

Giménez Cacho: It’s almost dead or closed now, so this was a bit of a temporary resuscitation. They reopened it for this. So it was very familiar.  That you’re dancing suddenly by yourself, that’s something I also do very naturally.

This scene is at once community, family, and the individual, all celebrating simultaneously.

Lamadrid: I think Alejandro was a genius in planning it that way. Every family member has this moment with Silverio in that scene. We each have a moment with him and his friend, Martin, played by Andres Almeida.  We’re all there with him, and every one of us has a different connection with him. So that’s beautiful, and then surrounding us is the community, and it’s a mixture of people, and everyone’s wearing different colors, which was done so well by the costume department. It’s just a little bit of everything, and I think that’s what the world is.

Giménez Cacho: It’s a very natural way that we learn in Mexico to dance at parties with family. It’s how we relate.

Lamadrid: It doesn’t matter who you are. The producer might be there, and the guy who picks up garbage in the morning is there, and the taxi drivers, and the actors, it’s just this mix of people.

It also feels like a suspended moment of memory.

Giménez Cacho: Maybe it is also like a dream. That’s the trick with this movie. You don’t know exactly if this is happening in real-time or in Silverio’s memory. It doesn’t matter. That’s what I love about the movie, that it’s very free to reconsider this or to erase a little bit of the border or the lines between what’s real and what’s unreal. It allows us to reconsider what is real. That’s very liberating.

Bardo is very much an in-the-present-moment film as a cinematic experience, but parts stay with you, which are very individual to each viewer. What over time has stayed with you as you have watched the film again?

Lamadrid: For me, I’ve definitely taken away something I had never really questioned in my life, which was a lot about identity. I’m Mexican, I grew up in Dubai, then moved to New York, then went back to Mexico a few years ago. I had never considered that I never belonged here or I never belonged there. But then, watching the film, there’s a sense of maybe not belonging, or going into a country and feeling excluded, or feeling looked down upon because of your color or your language or even just your financial situation. It still happens. I hope that watching this movie really reflects that you can be from everywhere, and belong everywhere, and have a part of everywhere with you. I was recently in New York staying in a hotel room, and right in front of it, outside, there was a poster that said, “We are all on our way home.” There was an image of a house with legs. That’s us. That’s what the movie is. We are that, and inside the house, it’s lit up with lights. Home, for us, is our family. It’s what we love to do. It’s the details of life that really light up our day. It’s recognizing your own soul, asking those questions, and diving internally. That’s home. That’s what I take with me.

Bardo: False Chronicle of a Handful of Truths is currently playing in theaters nationwide and streams on Netflix beginning on December 16th.