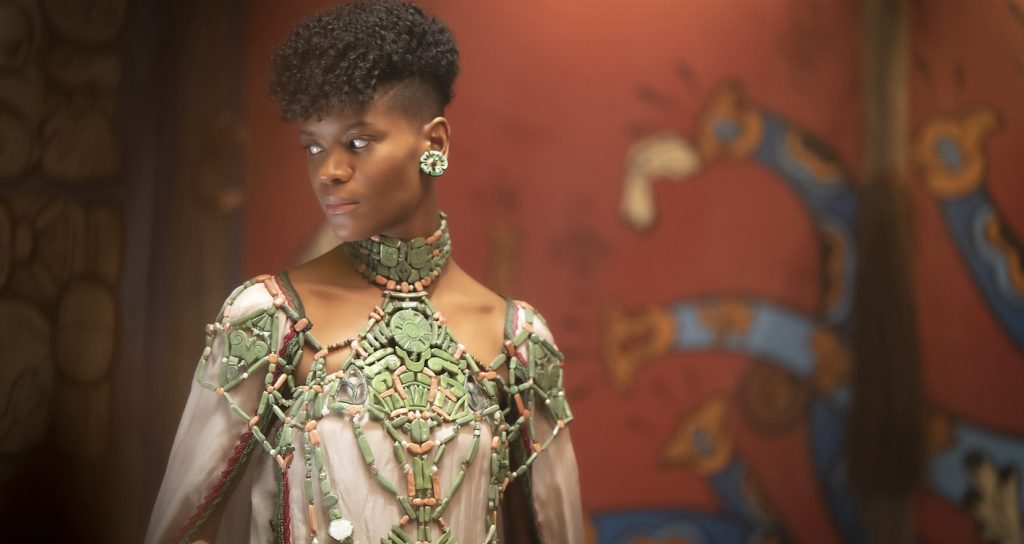 Both 2018’s Black Panther and this year’s Wakanda Forever have hugely impacted popular culture, not least by expanding the acceptance and expression of Afro-Futurism in everything from fashion and hairstyles to architecture. Both production designer Hannah Beachler and costume designer Ruth E. Carter won Oscars for their work on the first film and are in the running for a return to the podium with Wakanda Forever.

For Black Panther, hair department head Camille Friend found ways to incorporate elements of African tribal culture and expanded those influences in Wakanda Forever. She used the same trial and error and inventive thinking required to create looks that could be worn over the entire production or in challenging environments, like those underwater sequences in Talokan. How could the Mayan-inspired Talokani hairstyles look consistent when the cast members wearing them were submerged in water for over 12 hours?

In a chat with The Credits, Friend takes us through the problem-solving required to get those gorgeous looks in Wakanda Forever. She also considers the lasting effects her designs have had on pop culture and how she is helping Hollywood become more inclusive as the founder of Hair Scholars, which mentors and educates professional hair stylists about working in film and TV.

The hair design in Wakanda Forever was partly based on research into Senegalese warriors, the Zulu tribe, and the Maasai people. What are some of the direct results of that research that viewers can see expressed as part of the specific characters or specific scenes in the film?

The Jabari are definitely inspired by Senegalese warriors. Even from the first one, you know, with Winston Duke, we really talked a lot about how the Jabari were going to look, everything from the angles of the cuts to the lines in the head, even the white paint. All of that really comes from Senegalese warriors. Then you have the Himba tribe, where you have the beautiful clay look on the tribal elders. I remember on the first one, Ryan said he really wanted to do a clay wig. I thought it would be easy. It was not so easy.

Yes! We had weeks of trial and error. After a while, I just had to pray to God for the answer, and actually, the answer was going to Home Depot. We ended up making a clay wig from different substances that would hold up and last during filming. This time, we got the clay wig down. We could do a clay wig in two days, whereas it used to take us a week. So we have evolved. It’s all basically plaster of Paris. I’ll tell you the steps. We basically take a braid wig, and then we put the plaster on top of it, and we smooth it with gloves and a little water. We let that dry, and then we go in and paint it. That’s what stays and lasts forever. We’ve got it down to a science. I’m very happy about that one.

Were there any elements pulled from history for the scenes of mourning and memorial for T’Challa?

Definitely, I’ll tell you that backstory. The reason why Shuri and Ramonda’s hair ended up short is Ryan knew that in West African culture, when somebody is in mourning, they cut all their hair off. When we go into the story, it’s the year after T’Challa’s death, so how would their hair look a year later? That’s where my design began for those characters in Wakanda Forever.

How did you design the underwater sequences in Talokan? That had to be a challenge.

I’m going to say I have a whole different respect for water. In a lot of movies, you shoot them dry for wet. The hair is really dry, but we’re putting a little spritz on them. In Wakanda Forever, it was a whole different ballgame. When you have people thoroughly submerged in water for 12 hours a day, how will you make this happen? Plus, we could not put any product in the hair because hair product in water makes it cloudy. So how are we going to make this hair stay with no product in it? We had to figure it out, and again, it was through a lot of trial and error. What glues work? What glues don’t? We ended up using a lot of silicone glue because they hold up under water and they’re more of a flexible glue. We took spirit gum, broke it down with alcohol, and made it really thin. Then we made it into a hairspray that we would spray on all the pieces and let them dry. We figured out how to get it thin enough so that it wouldn’t change the color of the hair. Then we sprayed all the pieces with the glue hairspray that we’d made, and that’s how all the hair would stay up while in the water for 12 hours a day.

Can you talk about how both Black Panther and Wakanda Forever have had an influence in the real world in terms of access and expansion of hair products and designs for Black hair?

After the first one, a writer friend called and told us we made Black hair beautiful. After Black Panther, there have been so many more movies that have showcased natural hair. I’m so proud that we could have an impact in starting that movement. I have people who hit me up on Instagram and tell me, “My daughter was so happy to see somebody that looks like her onscreen.”  They saw somebody whose hair texture was the same. Also, 3C or 4A, B, or C textures were very hard to find on the first one. We had to make it. We had to perm it. It was a lot of work that we had to do. On this one, every manufacturer has that now. I think culturally, that’s what’s changed. Even with products, I was doing some research recently and found over 40 Black-owned, female-owned haircare companies. That’s a beautiful thing to have that many in the marketplace.

It’s the whole spectrum of natural hair, both on the screen and off, being celebrated.

I think there’s a huge difference. And we have things like the C.R.O.W.N. Act, which has legalized wearing your hair naturally. You can wear your hair in any style that you want and still be in the workplace. It doesn’t matter if you’re a lawyer, doctor, or a short-order cook; you have the right to wear your hair naturally, how it grows out of your head. The younger generation will grow up with that, without any shame about their hair. It just gives us such better body positivity and gives us so much more of a beautiful image and confirmation that Black hair is beautiful.

And to further push the needle forward in Hollywood, you founded Hair Scholars, which has its own website and is having a big impact on inclusivity in the business.

It’s one of my greatest passions. I’m a firm believer in equity and inclusion. I used to work for Warner Brothers, and that’s what I did for them. It’s about education. Education is freeing for people. What I love to teach is how to be in the business, how to treat it as a business, how to make your deals, and how to be a department head because that’s definitely what people are looking for, is equity in the business. This is how you put on a wig. This is how you do textured hair. So all those things, together, will make a better community. At this point, a lot of producers call me on movies that I don’t even do, and I help people crew up because I know the people in LA, New York, London, and Atlanta; I know all the people and what their skill sets are. I’m perfectly happy to do that. Whether you’re white, Black, Native American, Asian, or Filipino, there’s absolutely no excuse why a performer sits in the chair and you, as a professional hair artist, makeup artist, or barber, cannot do their hair. That is unacceptable in 2022 and 2023 and going forward. Every performer has a right to walk into the trailer and sit down in the chair and be taken care of and feel beautiful.