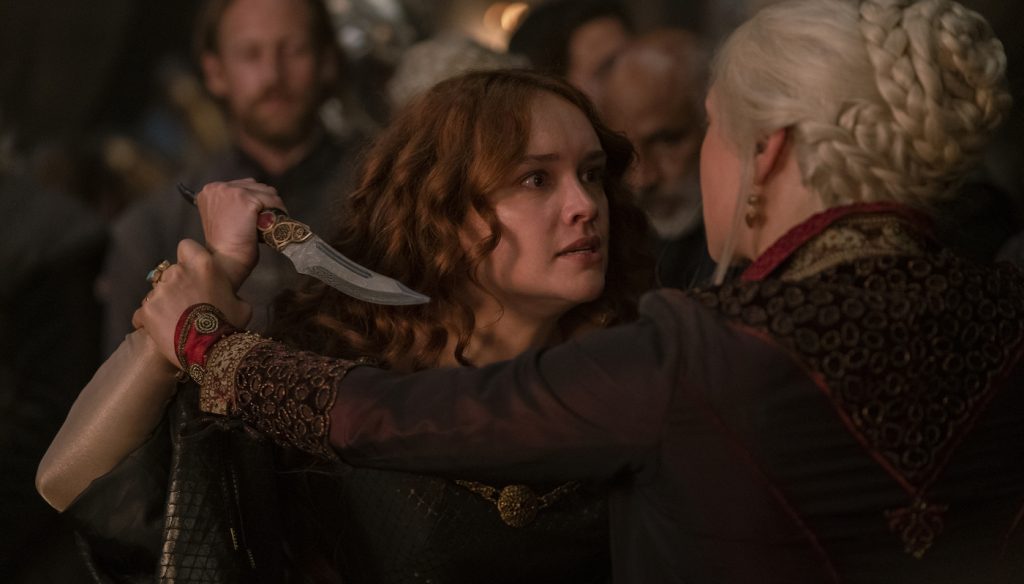 An eye for an eye. It’s one of the oldest, coldest, cruelest forms of justice, the type of punishment that would, of course, fit perfectly in House of the Dragon. And so it was what Queen Alicent called for after her son, the clearly troubled, dragon-obsessed Prince Aemond (Leo Ashton), lost an eye in a post-dragon-ride scuffle with his half-nephews.

Episode 7 began in mourning, with the funeral, held on the island of Driftmark, for Lady Laena after last week’s death by dragon. All the major players were there—the late Laena’s husband, Prince Daemon, not exactly grieving himself, their children Baela and Rhaena, King Viserys, Queen Alicent, their children Aegon, Aemond, and Helaena, Princess Rhaenyra, Prince Laenor, “their” children Jayce and Luke. Otto Hightower, Ser Criston Cole, the entire House Velaryon.

While the Targaryeans deal with their dead through dragon fire, the Velaryons commit their dead to the sea. While Lady Laena was being laid to her final rest beneath the waves, the mood on land wasn’t just somber, it was downright awkward. The scene is filmed and performed with an admirable eye towards isolation—even gathered all together, the members of House Velaryon and House Targaryen are estranged from each other and amongst their own families. A lot of loaded looks, a lot of whispering.

“The multitude of conversations are really about a family that has been somewhat blown apart, trying to find solace in each other, trying to forgive each other for all their past wrongdoings,” says episode director Miguel Sapochnik in this week’s “Inside the Episode” video. Spoiler alert: they do not.

After the ceremony, Princess Rhaenyra and Prince Daemon continued where they left off ten years ago at the brothel in Old Town, but this time, on the beach, they consummate their relationship. “Rhaenyra and Daemon are made of the same stuff. They’re a terrible match,” says Emma D’Arcy, who plays Rhaenyra, in the video. “I think there’s a dangerous chemistry.”

While the pairing of Daemon and Rhaneyra will have huge implications for everyone gathered at Driftmark, there’s an even more pressing situation courtesy of the littlest royals. Once the funeral was done, the petulant Prince Aemond, tired of being mocked for not having his own dragon, went off and filched the late Lady Laena’s dragon Vhagar, the biggest of them all. It took a lot of pluck for Aemond to mount the beast, who for a moment looked like he was going to turn Aemond into a charred pile of bones. Yet Aemond pulled it off, and in so doing, he claimed Vhagar for himself and House Targaryen, a huge coup with implications to come. Yet he’d pay the price, as we mentioned up to.

Upon returning victorious after his joy ride atop his new dragon, Aemond had to face Lady Laena’s grieving daughters, Baela and Rhaena, the latter furious because Vhagar, she believed, was to be passed to her after her mother’s death. The fight that breaks out is surprisingly brutal, considering these are children, and at one point, it looks like Aemond is going to kill one of his accusers with a rock, but it’s Princess Rhaenyra’s son Jayce who manages to slice through Aemond’s left eye with a dagger.

In the aftermath of Aemond’s maiming, there’s one of those classic Family Meetings that most members of a big brood have experienced at one time or another. Only this one, in pure Game of Thrones fashion, devolves into bloodshed. King Viserys is apocalyptic at the quarreling within his own family. The man cannot get his head around why people can’t just get along, despite the fact it’s his own failing health, the scrabbling for the throne, and the growing chasm between his wife, Queen Alicent, and his daughter, Princess Rhaenyra, that feeds the fires of his family’s discontent. Queen Alicent finally breaks free from her usually calm, cool demeanor and demands justice—an eye for an eye. When King Viserys refuses to allow it, she takes Viserys’ Valyrian-steel dagger and goes straight for Rhaenyra, intending to take her child’s eye as a proper recompense for her son losing his.

That dagger, mind you, once belonged to Aegon the Conquerer and is inscribed with the prophecy “The Prince That Was Promised.” Hundreds of years later, that dagger will be wielded by one of Littlefinger’s assassins in an attempt to kill Bran Stark; it will then be used—twice—by the actual Prince That Was Promised, only it turns out the prince was a princess (not that she’d approve of the title), and her name is Arya Stark. Arya uses it to kill Littlefinger and then, at the very end of Game of Thrones, to take out the Night King.

Alas, in House of the Dragon, this mystical weapon merely slices open Rhaenyra’s arm. The wound will heal, but a scar will remain. The relationship between Rhaenyra and Alicent has now spilled blood and appears broken beyond repair. House Targaryen, House Velaryon, House Hightower (of which Alicent and Otto belong), and House Strong (led by the viperish Larys) are all more or less at war, even if, at this point, the war looks more like a dangerous game amongst scheming elites.

There was more intrigue in this meaty, slow-burn of episode, including the marriage, at long last, between Princess Rhaenyra and Prince Daemon. The only way the wedding could proceed was that Rhaenyra’s current husband, Prince Laenor, had to die. Enter Ser Qarl.

Rhaenyra and Daemon hatched a clever plan for the small detail of Laenor’s death, arranging to have Ser Qarl Correy challenge Laenor to a duel in the throne room. As Laenor’s page runs off to alert the guards, the duel commences. The guards return, along with Lord Corlys and Lady Rhaenys, to find a body wearing Laenor’s clothes burned beyond recognition in the fireplace. Ser Qarl is gone.

The episode ends with the final twist—Laenor is still alive, his head freshly shaven, and on a boat with Ser Qarl. The body in the fireplace? A poor page, having done nothing wrong save be close to power in the ever dangerous, degenerate world of Westeros. So it goes. So it went. So it will go long into the future.

Check out the “Inside the Episode” below.