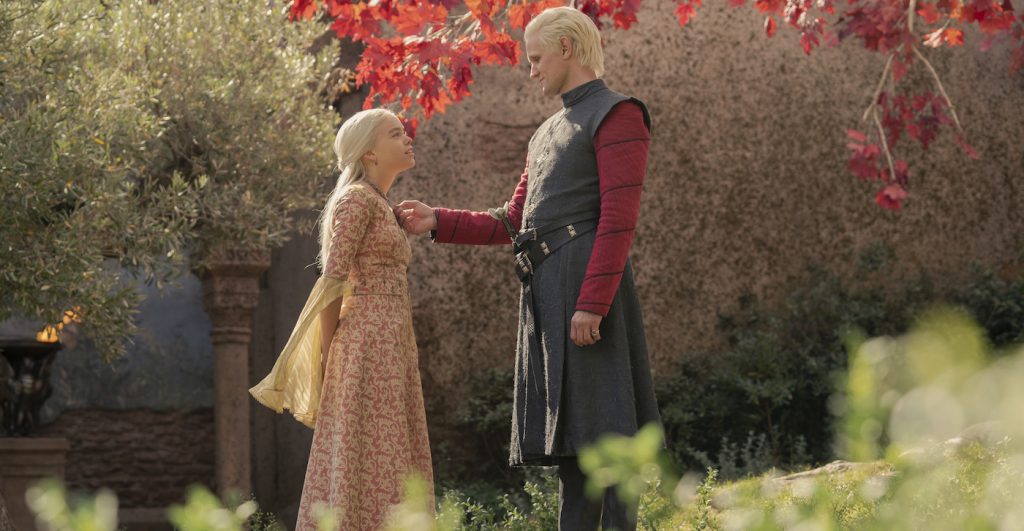 For Game of Thrones fans, you knew coming into House of the Dragon that it wouldn’t be long until things got very weird within the Targaryen household. And while the first three episodes provided plenty of intrigue and danger within the halls of power at the Red Keep and beyond, it was episode 4, “King of the Narrow Sea,” that finally dipped into officially taboo territory.

“You Targaryens do have queer customs,” Alicent (Olivia Cooke) says to her friend (and now the daughter of her husband) Princess Rhaenyra Targaryen (Milly Alcock). Alicent is referring to an accusation against the young Princess that she “coupled” with her uncle, the swaggering, loathsome Prince Daemon (Matt Smith), in the bowels of a brothel out beyond the castle walls in King’s Landing. The princess protests, swears that it’s all lie, and promises her queen that’s she still a maiden. These are half-truths at best, revealing that Rhaenyra knows when to flatter her friend—I’d never lie to you, etc.—and proves she’s a nimble political player herself. In fact, Rhaenyra turns this accusation, made by Otto Hightower (Rhys Ifans), to her advantage. At long last, she convinces her father, King Viserys (Paddy Considine), that Otto is nothing but a schemer, desperate to see his grandson Aegon on the throne. Although furious with Rhaenyra, Viserys is convinced by her speech, and the episode ends with him relieving Otto of his duties as Hand to the King. Yet this move is also exactly what Prince Daemon would have wanted, too. While Rhaenyra is an intelligent, potent presence, the entire episode felt like a game constructed by Daemon that everyone else was playing.

All of this was set into motion by Prince Daemon’s return from the Steppstones, arriving in King’s Landing in a homemade crown and carrying a weapon he prized from the dead hands of the Crabfeeder, the man he defeated after years of battle. He offers both to Viserys as a sign of respect, yet this being Daemon, we know he’s not suddenly a good and loyal subject of his brother, the king. Although Viserys, the most emotional of all the major players in House of the Dragon, wants desperately to believe his brother is back, mature, and finally reasonable, the rest of us see his treachery a mile away. You understand the desire to be close to your brother again, but you do want to shake Viserys by his royal robes and tell him to get some sense. His brother is plotting. Always plotting.

“We thought he should come back a seemingly changed man and then turn out to be exactly as the same as he was before,” says showrunner/executive producer/director Miguel Sapochnik in a new video released by HBO. “When he comes back, he’s not looking for his brother anymore, he’s somehow looking to get back at this brother, and Rhaenyra becomes the apple of his eye,” he continues.

The chemistry, creepy as it is, was established between Daemon and Rhaenyra from the first episode when he gifted her with a necklace she’s worn ever since. Yet, in “King of the Narrow Sea,” that chemistry is being used to Daemon’s advantage. He secrets her out of the Red Keep for a night amongst the regular folk in King’s Landing and leads her, eventually, to the brothel he knows so well. While Sapochnik stresses in the new behind-the-scenes video that they talked a lot about how Rhaenyra isn’t some naive innocent here, she is clearly being manipulated. Yet by now, Westeros-watchers who have 8 seasons of Game of Thrones under their belt know that for people like Targaryens, an uncle/niece pairing is par for the course. But it’s still gross.

Back from that sordid night—it should be said that Daemon and Rhaenyra did not actually couple, but they got close—Rhaenyra ended up seducing her sworn hand, Ser Criston. By the time she woke up the next morning, news of her eventful evening out had spread to her father and his wife. The machine of revenge was set into motion by Daemon, and per his design, it would spread within House Targaryen, clearing the deck of Otto Hightower, one of Daemon’s enemies within his brother’s court, and driving his brother, whose body is already literally falling apart, even deeper into paranoia and ill cheer. King Viserys banished Daemon from his sight, but that, too, felt like a weak move. What he should have done, if he was as ruthless as he needed to be, was separate Daemon’s head from his shoulders. Alas, Daemon likely knew he never would.

All in a night’s work for the sinister Prince Daemon.

For a deeper look inside the episode, check out this video from HBO: