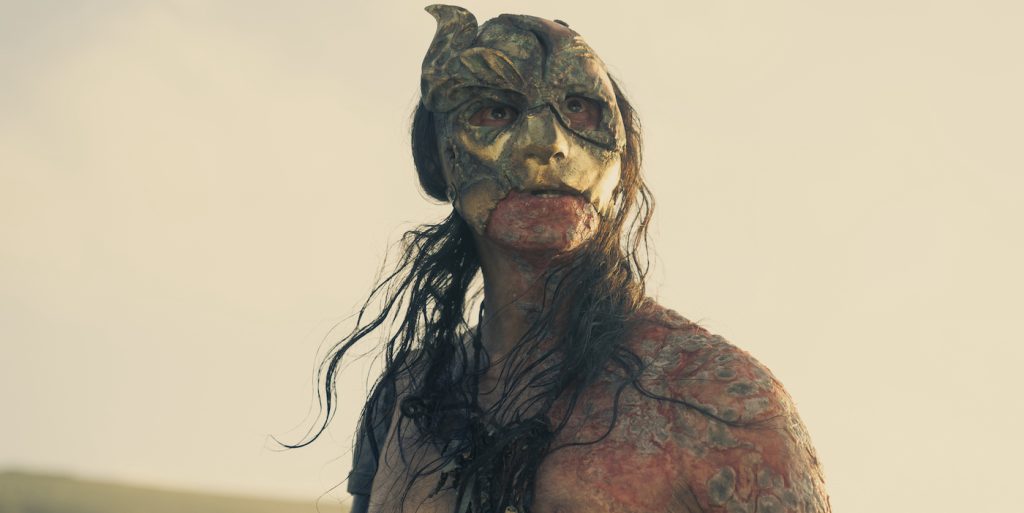 In House of the Dragon‘s third episode, “Second of His Name,” the birth of Aegon Targaryen is but one of the major intrigues that unsettle things within the dragonlords power structure. The littlest member of the family is now expected to be named heir to King Viserys’s (Paddy Considine) throne, no matter the King’s promise to his eldest born, his daughter Princess Rhaenrya (Milly Alcock), that she was his heir. While the King’s Hand, Lord Otto Hightower (Rhys Ifans), spends the early part of the episode gently reminding the King that choosing Aegon as his heir is the appropriate, nay, the expected thing to do, the king’s brother Prince Daemon (Matt Smith) is at war with the Crabfeeder (Daniel Scott Smith), trying to show the realm what a real leader looks like.

These twin issues—two potential heirs at home, a surly, violent would-be usurper (in his own family, no less) fighting in the Stepstones to sure up valuable trading routes and remind people why he should be the rightful heir—have made the crown as heavy as its ever been for Viserys. In a new “Inside the Episode” video from HBO, the creators and cast discuss the intricate episode, which was set over several years worth of drama.

“We always talked about episode three being about leaving childhood behind for many of the characters,” says co-creator and showrunner Ryan Condal. “For Daemon, for Rhaenyra, for Alicent (Emily Carey).” One of the ways in which “Second of His Name” brewed up a heady blend of trouble for King Viserys is by subtly eliding a few years in the opening scenes. The fighting in the Stepstones has been going badly for House Targaryen for three years now, as the Crabfeeder’s army is both brutal and wily, melting into the caves whenever Prince Daemon flambés them with his dragon. Meanwhile, Queen Alicent gives birth to Aegon, and by the time the episode really kicks into gear, a royal hunt has been arranged to celebrate Princ Aegon’s second birthday.

Episode three leans into this “end of childhood” theme for Rhaenyra most of all. The young princess is now expected to marry. What’s worse, she’s expected to let go of her desire to ascend to the throne and forget her father’s promise. If Rhaenrya were to marry, she’d be making it all that much easier for the King to name Aegon as his heir. She’s tired of being a political pawn in her father’s games. For a young, headstrong, and very savvy woman, these are bitter pills to swallow.

Rhaenrya has had enough by the time the royal hunt rolls around, and after a very public fight with her father, she takes off into the woods on horseback. Her sworn protector, Criston Cole (Fabien Frankel), takes off after her, and the two are having a lovely time avoiding the royal shindig until a feral boar breaks up their party. How frustrated has Rhaenrya been? Ask the boar, who she stabs to death with a fury her uncle Daemon would recognize. They drag the boar back to the royal hunt, and everyone gets to eat pulled pork sandwiches.

Speaking of Prince Daemon, the man has had it. He’s been fighting down in the Stepstones now for years and there’s growing unrest among the rank and file, as the Crabfeeder and his army have been effectively keeping the battle at a brutal, bloody stalemate. Not even Daemon’s dragon has turned the tide, with the Bloodstone Caves offering the Crabfeeder and his men safety against the dragon’s fire. The problem for Daemon is immediate and life or death, but it for King Viserys, its one of his optics as well as economics. It’s more proof that the King doesn’t quite have his eye on the ball.

So, with all the pieces in place for a dramatic ending, “Second of His Name” delivers with a few declarative strokes that will have major implications for what’s ahead. King Viserys ignores Lord Otto Hightower (and the rest of the realm, frankly) and assures Rhaenyra she is still the heir. Meanwhile, Prince Daemon goes on what appears to be a suicide mission to take out the Crabfeeder and ends up successful (thanks to the cavalry showing up just in time), pulling the Crabfeeder’s torso out of his cave. The war in the Stepstones appears won, but the battle of the Iron Throne, as ever, rages on.

Check out the new “Inside the Episode” video here: