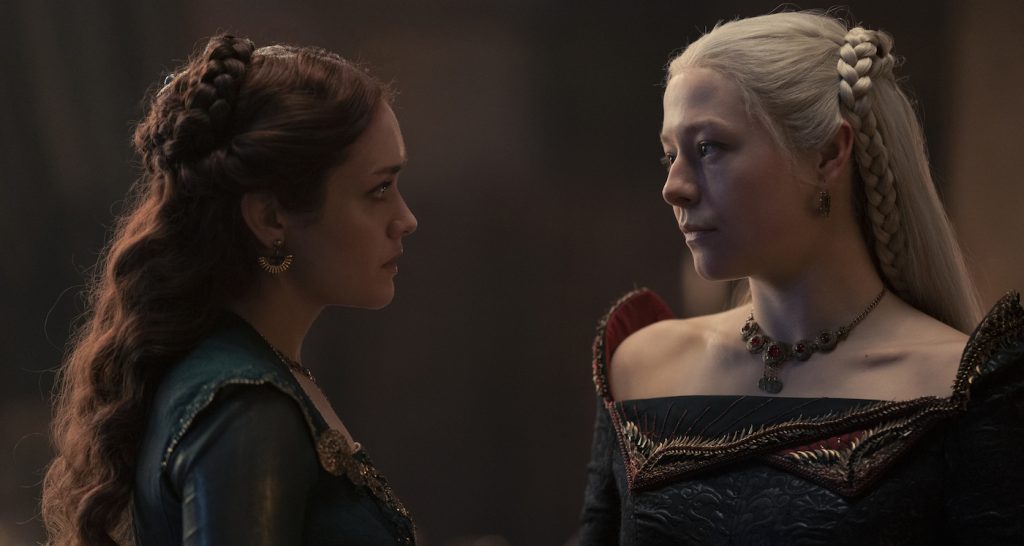 The upcoming 6th episode of House of the Dragon will propel us a few years into the future after the grim wedding between Princess Rhaenrya Targaryen (Milly Alcock) and Ser Laenor Velaryon (Theo Nate) that anchored episode 5. That episode also hinted at the growing discord between the princess and her lifelong friend, Queen Alicent Hightower (Emily Carey), and now a new trailer for episode 6 introduces the adult versions of these two powerful young women. The roles now belong to Emma D’Arcy, playing the adult Rhaenrya, and Olivia Cooke, as the adult Queen Alicent, and reveals just how dangerous things are about to get for both women as King Viserys (Paddy Considine) tries, in failing health, to hold the realm together.

Let’s pause for a moment to appreciate the work that Milly Alcock and Emily Carey did in the first five episodes of House of the Dragon. The series, the first Game of Thrones prequel, was always going to draw a ton of critical attention, as well as millions of viewers, and Alcock and Carey were asked to do a lot of work in the first five episodes. These two young performers were being tasked with not only carrying a large percentage of the narrative focus, representing the potential future of House Targaryen and the hopes of House Hightower, but they sharing the screen with some very seasoned performers, including the aforementioned Paddy Considine, Rhys Ifans as Otto Hightower, Matt Smith as Prince Daemon Targaryen, and Steve Toussaint as Lord Corlys Velaryon. They succeeded. The strength of House of the Dragon thus far has been its tighter focus on the intrigue within House Targaryen and the succession battle over the Iron Throne rather than the more sprawling, realm-traversing drama of its predecessor, and Alcock and Carey have been critical to its success thus far. You cared about their friendship, about Princess Rhaenrya’s ambitions, to Queen Alicent’s initial restraint and, later, her decision to pick a side (it wasn’t, alas, Rhaenrya’s).

The bloody banner will now be carried by D’Arcy and Cooke, two very talented actresses who will no doubt meet the challenge. These two former friends will have to make some very tough decisions in the five episodes remaining in the season, as King Viserys’ health continues to decline and the fight for who sits next on the Iron Throne becomes more pitched. That the series has drawn so many viewers is not surprising considering what a cultural juggernaut Game of Thrones was, but the fact that it’s been satisfying thus far is due, in large part, to Milly Alcock and Emily Carey’s performances.

Check out the trailer for episode 6 below.