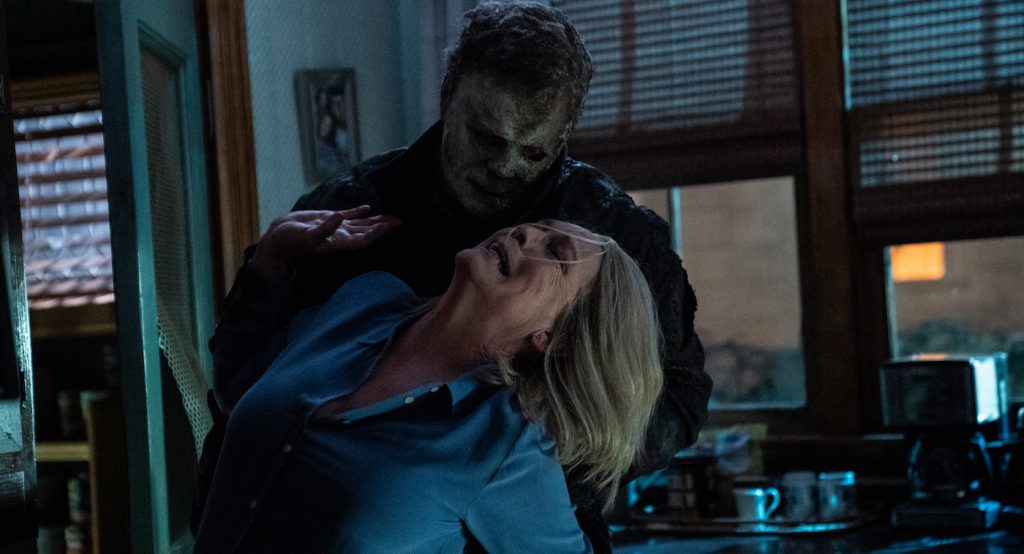 “It’s a movie about a final reckoning,” Jamie Lee Curtis says at the top of this new look at Halloween Ends, the final film (presumably) that will feature her indomitable Laurie Strode facing off against the seemingly unkillable Michael Myers. “Michael Myers, in that mask, represents pure evil,” Curtis continues, “there is no rhyme or reason.”

That lack of a rhyme or reason is one of the aspects of Myers that has made the character such a potent fixture in our imaginations—the dude is just awful. It’s also one of the reasons why Halloween and its various iterations and sequels have continued on years after John Carpenter’s 1978 original. You can project anything onto The Shape, as he lacks the personality of other iconic movie monsters and instead presents as both an unstoppable force and an immovable object. He’s an unkillable killing machine.

Writer/director David Gordon Green breathed new life into the franchise with the first film in his soon-to-be-complete trilogy, 2018’s Halloween, followed by 2021’s Halloween Kills and now, the final film—and possibly the final say—in the decades-long battle between Laurie and Michael.

The new teaser connects Curtis’s first outing, in the 1978 original, to these last three films she’s appeared in. “It will be difficult to say goodbye to Laurie Strode,” Curtis says, but what we can be assured of is that goodbye is going to be bloody, brutal, and possibly (one can hope) cathartic.

Halloween Ends picks up four years after the events of last year’s Halloween Kills, with Laurie living with her granddaughter Allyson (Andi Matichak) and putting the finishing touches on her memoir. Michael Myers hasn’t been seen in those four years, and Laurie is trying, at long last, to move on. That’s when things get grim.  A young man named Corey Cunningham (Rohan Campbell) is accused of killing a boy he was babysitting, which begins a process Laurie knows only too well—the return of the killing machine that is Michael Myers.

This is Laurie Strode’s last stand.

After 45 years, the most acclaimed, revered horror franchise in film history reaches its epic, terrifying conclusion as Laurie Strode faces off for the last time against the embodiment of evil, Michael Myers, in a final confrontation unlike any captured on-screen before. Only one of them will survive.

Icon Jamie Lee Curtis returns for the last time as Laurie Strode, horror’s first “final girl” and the role that launched Curtis’ career. Curtis has portrayed Laurie for more than four decades now, one of the longest actor-character pairings in cinema history. When the franchise relaunched in 2018, Halloween shattered box office records, becoming the franchise’s highest-grossing chapter and set a new record for the biggest opening weekend for a horror film starring a woman.

Four years after the events of last year’s Halloween Kills, Laurie is living with her granddaughter Allyson (Andi Matichak) and is finishing writing her memoir. Michael Myers hasn’t been seen since. Laurie, after allowing the specter of Michael to determine and drive her reality for decades, has decided to liberate herself from fear and rage and embrace life. But when a young man, Corey Cunningham (Rohan Campbell; The Hardy Boys, Virgin River), is accused of killing a boy he was babysitting, it ignites a cascade of violence and terror that will force Laurie to finally confront the evil she can’t control, once and for all.

For more on the Halloween franchise, check out these stories: