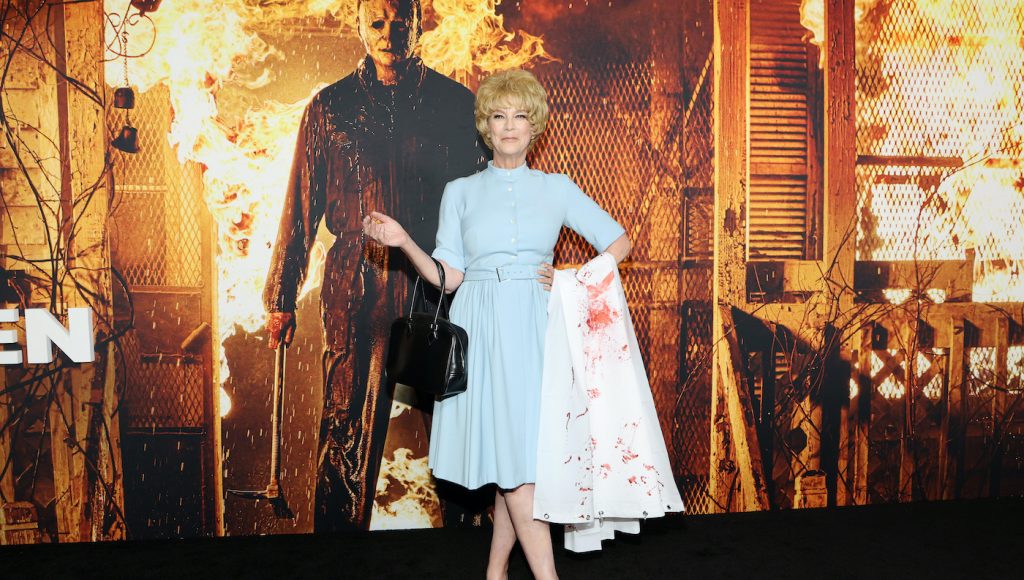 Jamie Lee Curtis knows how to make an entrance. The star of director David Gordon Green’s Halloween Kills arrived at the film’s premiere at the TCL Chinese Theater in Hollywood on Tuesday night dressed as her mom Janet Leigh’s iconic Psycho character. Wearing a blonde wig, blue dress, and carrying a bloody shower curtain, Curtis hit the black carpet looking period-perfect. This is a woman who has legendary horror films running through her veins and her family tree.

Speaking about the Halloween franchise, Curtis had this to say about the original film: “It’s the ultimate good versus evil. Laurie Strode represents the quotidian, quintessential, innocent American teenage girl, that is innocence personified. And when you collide it with the essence of evil which is Michael Meyers, you create a tension that you, the audience member, wants to protect her.”

Curtis knows what she’s talking about. She appeared in the very first Halloween, in 1978, directed by the legendary John Carpenter. Laurie was the one person Michael Myers couldn’t finish off (she also protected a gaggle of children), and then, 40-years later, the two met again in Green’s 2018 smash-hit Halloween. In Green’s new trilogy (more on the third film, Halloween Ends, in a second) the stories link up to Carpenter’s original, skipping all sequels between 1978 and now. In Green’s 2018 Halloween, it looked like Laurie had finished him off, at last, by burning him alive in her basement. Alas, Michael survived, and Halloween Kills finds him back to his old slashing ways the very next night. Laurie teams up with her daughter Karen (Judy Greer) to once again try to finish the job.

But what about the final film, Halloween Ends, due in October 2022? Curtis had something very intriguing to say to The Illuminerdi:

“It’s going to make people very angry. It’s going to stimulate people. People are going to be agitated by it. And it is a beautiful way to end this trilogy. Now that’s all I kind of knew from David. Only recently have he and I started to talk a little bit post-Venice film festival a little bit about the movie, a couple little tweaks that I’ve offered, but very little that you know, this man makes great movies. I just have to stay out of the way.”