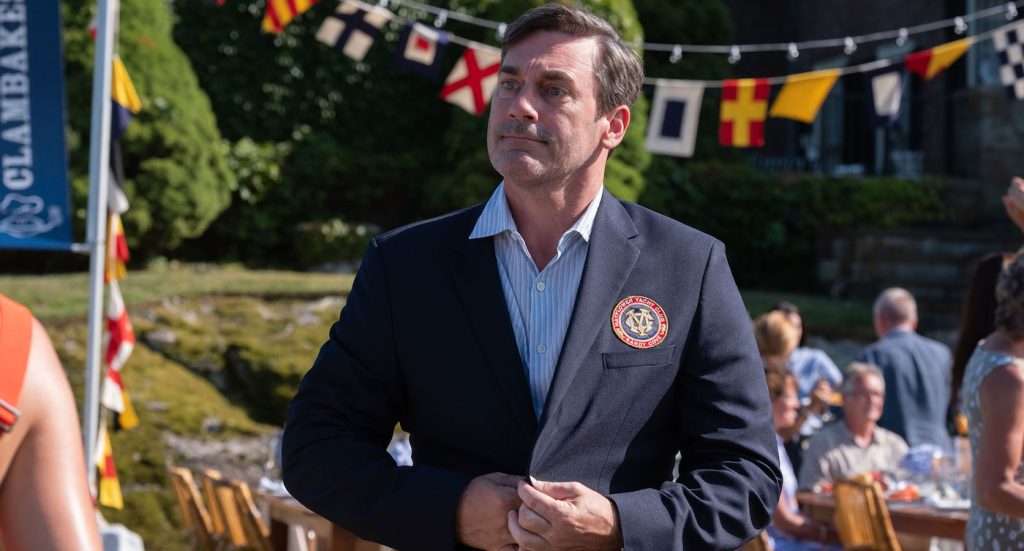 Being pegged as the main suspect in a murder may sound worrisome, but some cinematic shooting, scenic locales, and Jon Hamm’s charm can make such a predicament seem seductive, and Confess, Fletch both resurrects and modernizes the classic crime caper. Pulled from the pages of Gregory Mcdonald’s 1970s novels, Fletch now carries a smartphone, but still inhabits an atmospheric world of suspense and adventure.

Cinematographer Sam Levy strikes a noir tone with contemporary clarity. He cites filmmaking techniques from Alfred Hitchcock’s To Catch a Thief, Robert Altman’s The Long Goodbye, and The Godfather cinematographer Gordon Willis’ work as inspiration. “We used a set of lenses that were manufactured in the late 70s, but we captured the movie with a very modern 4K digital camera. It was sort of making a cinematic collage of a lot of these concepts, just trying to render Greg [Mottola]’s script in a simple and elegant way.”

Pairing a cutting-edge Alexa LF camera with retro Canon K35 lenses gives the movie its moody sensibility. Modern audiences accustomed to hyper-sharp HD will register the softer edges as vintage, but at one time, the lenses Levy used were the height of technology.

“They’re very old. They’re very soft. When they’re in focus, they are not as highly resolved as lenses that are manufactured today,” Levy acknowledged. “Actually, the lenses we used were used for the original Alien movie. The funny thing is, at that time, these were very what they called high-performing lenses. Very sharp. Very vivid. Used with film and the photochemical process, which can really soften images up, especially if you’re watching it big in a drive-thru. These were sort of standard for sharp lenses. Now, they’re popular because they’re very soft and round, and they work in concert really well with these high-resolution cameras.”

Confess, Fletch drops in on investigative reporter Irwin ‘Fletch’ Fletcher probing an art theft that takes a deadly turn. Hamm’s performance has the suave and humorous sensibility of Cary Grant in similar comedy suspense roles. The project appealed to Levy when creative conversations made it clear that the jokes wouldn’t be too heavy-handed.

“It was very much [Greg Mottola] and Jon Hamm who just didn’t want something broad or bright or too high key,” Levy said. “So, that really got my attention. That plus the fact that there’s a significant thriller and mystery aspect to the story. At the end of the day, it’s also a comedy, but they really didn’t want me to think about it being a comedy too much in terms of how it looks. Or ‘lighting a joke’ as some people will say.”

Despite the script’s levity and comedic beats, Levy grounds the film in subdued, moody tones. Dealing in the criminal underworld, Fletch often finds himself moving through shadowy spaces. Levy recalls working with The Black Phone second unit cinematographer David Feeney-Mosier on previous projects and discovering a lensing phenomenon that helped them sharpen up dark scenes.

“We were shooting a different movie, and we were testing some lenses and were playing with underexposure. [Feeney-Mosier’s] comment about the lenses, which he did not like, was, ‘These have no teeth to them.’” Levy remembered. “What he meant was they’re not grabbing silhouettes. They’re not grabbing faces and edges and lines in the shadow area. I immediately knew what he meant. When the lenses were technically in focus and sharp, they were just a little murky and blurry and just not very present.”

With trouble trailing him and marked with suspicion, Fletch is driven into dark corners to try to clear his name. Although he must do some of his most critical snooping after sundown, the audience couldn’t stare at a black screen for the bulk of the film. Clarity in low lighting was critical.

“I think I’m very drawn to a really strong silhouetted image. There’s a good amount of that in this movie. Usually, it occurs when the subject, like Jon Hamm, is very deeply in shadow, but there’s light behind him and maybe a brightly lit wall behind. Then the silhouette is really sharply carved out. You can see someone’s profile or just even their body moving.”

The movie’s climax had one unplanned element to contend with – a driving rainstorm. Rather than lose a day of filming, the crew capitalized on the atmosphere that ultimately added to the mood of the scene. Rain is notoriously elusive to capture on screen, but professional experience and a little luck made it an asset. The action was captured by an intricate steady cam shot following Hamm sneaking around at night.

“The rain scene was completely real,” Levy noted. “Usually, when real rain falls, it doesn’t read on camera, but it was so dense that it absolutely read. It looks like we planned it and had a million rain towers, but the fact is, we didn’t. We just shot this whole sequence very quickly before the sun came up, and it just never stopped raining. It’s just one of those brutal nights for the entire crew. By the time the sun came up, we had just gotten done. It rained pretty consistently throughout, so it cuts together. The rain was not planned, but the mapping out to shoot the sequence was very carefully planned over months.”

The production team shot in both Levy’s hometown of Boston, where inclement weather is routine, and sunny Rome with help from local crews. Filming is popular in Boston, Levy noted, but the book was actually set there. The spirit of each city is well represented. Production designer Alex DiGerlando helped parse out the vibe that they both exude. Although usually on location, Boston did stand in for Rome in some interior scenes.

“It was fascinating to listen to Alex discuss the anthropology of Rome and what needed to happen for us to be able to capture just like a bedroom that we were shooting in Boston and what it had to have in it, what it had to look like for it to believably play for Rome,” Levy said. “The truth is when you go to Rome, and you work with an amazing crew like we did, Rome is Rome. It’s amazing. It has an effervescence.”

Not every day was a freewheeling romp around the city. The crew still had to maneuver in tight, restrictive spaces and work through challenges.

“There’s a significant part of the movie that takes place in a yacht club, inside a sailboat. A rich person’s sailboat, but a sailboat is only so big when you’re in the bowels shooting inside of it. Just figuring out the logistics of that stuff presented itself on screen in a subdued way,” Levy noted. “Rome had the electricity and giddiness of a bunch of outsiders gallivanting around and shooting Jon Hamm riding a Vespa. It’s at the beginning of the movie, and his character has lightness and levity. The murder hasn’t yet happened when he’s in Rome. You’re not burdened with all that weight yet in the Roman part of the movie.”

Don’t settle too comfortably into the beautiful European scenery and captivating art world. There’s an adventure about to unfold, and it hits quickly.

Levy has one piece of advice for audiences. “Try and see it in the theater if you can.”

Confess, Fletch is now open in theaters and on demand.