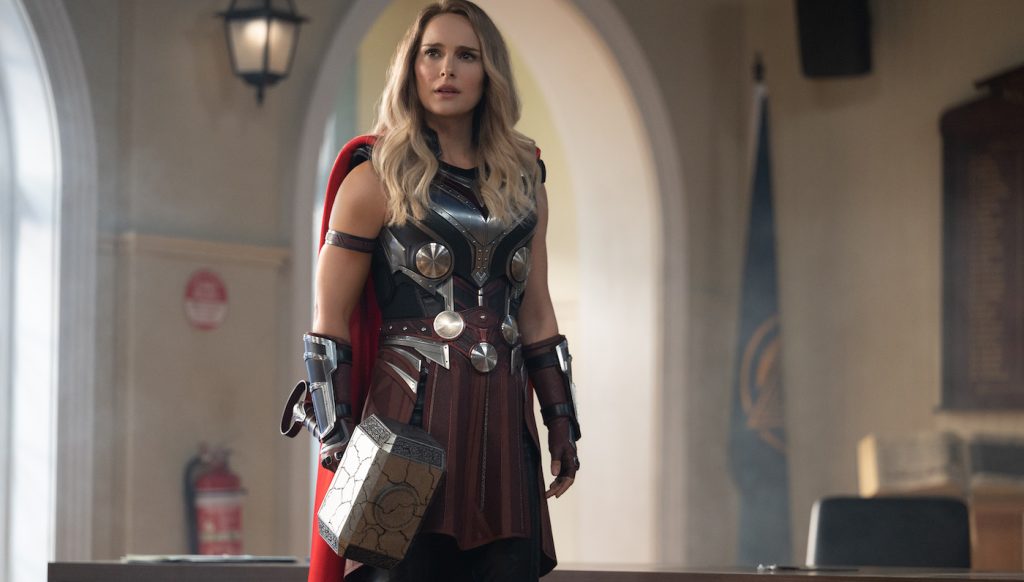 Co-writer/director Taika Waititi’s Thor: Love and Thunder is finally out today, which means the whole world finally gets to see Natalie Portman’s return as Jane Foster, and, more to the point, her transformation into the Mighty Thor. If you haven’t been following Portman’s return to the Marvel Cinematic Universe, we can summarize it very quickly. Portman co-starred in the first two Thor films as the scientist Jane Foster, who was also Thor’s love interest and was also often in need of saving. But Portman wasn’t a part of Taika Waititi’s first MCU film, the game-changing Thor: Ragnarok, and it seemed her time with the MCU might be in the past. But Waititi and his Love and Thunder co-writer Jennifer Kaytin Robinson had other ideas.

Waititi and Robinson wanted to write a film based on writer Jason Aaron’s “Mighty Thor” comic series, in which Jane Foster ends up becoming Mighty Thor, capable of wielding the magical hammer Mjolnir. Waititi saw a way to get Portman back—only this time, she wouldn’t be a damsel in distress, she’d be a superhero causing distress for any bad guy or girl who got in her way.

Long story short, Portman said yes, and now she’s making what has to be the most significant return in MCU history. There was, of course, no question that Portman could handle any new role Waititi threw at her, but there was the question of how, exactly, they were going to get the 5’3″ Portman to credibly look like the six-foot-tall Mighty Thor. Sure, there’s seemingly nothing that can’t be done on a movie these days, but the answer of how they jacked up Portman’s height is pretty wonderful. They went analog.

As Portman told Variety, the crew built a path, or “deck,” that Portman would walk on that was a foot off the ground so that when she was walking alongside Chris Hemsworth’s Thor, they were eye-to-eye. Tessa Thompson, who plays Valkryie, laughed at the memory. “They would call it a deck, but depending on the accent, sometimes it sounded like something else,” she told Variety. “Because we’re all children.”

“It was actually one of our running jokes,” Portman told Variety. “They’d all have to navigate my deck!”

Considering Portman’s Mighty Thor is often in scenes with the 6’3″ Hemsworth, it wasn’t necessary to make them the same height, but getting Portman close was paramount. All it took was a little deck, some post-production wizardry to erase it, and voila, Mighty Thor walks tall. You can see Portman’s transformation in theaters everywhere.