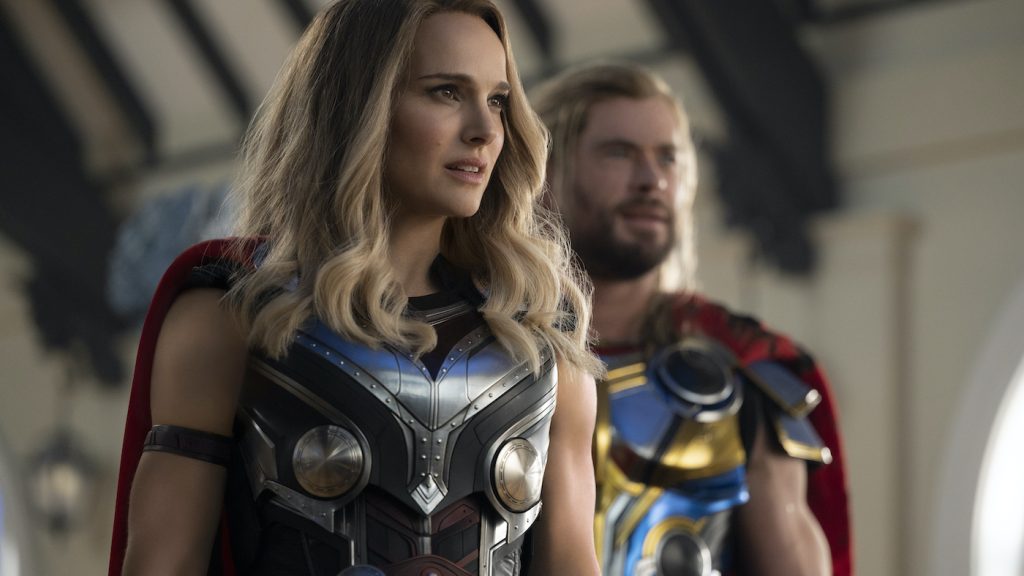 It will likely come as no surprise to hear that the first reactions to Taika Waititi’s Thor: Love and Thunder are raves. Waititi re-invigorated both Thor (Chris Hemsworth) and the Thor franchise with Thor: Ragnarok, his candy-colored cosmic romp that instantly turned the God of Thunder from Marvel’s dour beefcake into the funniest Avenger. What’s more, Ragnarok introduced us to Waititi’s vision of what a Marvel movie could look like—whimsical, wild, and passionately weird. So expectations were high for the sequel, and Waititi himself added to those expectations by promising viewers that Love and Thunder was the craziest movie he’s ever made. It seems like he delivered.

Coming out of the premiere last night, critics have a lot of positive vibes to share. Waititi comes in for praise for delivering a “subversive, irreverent spectacle,” as Variety‘s Courtney Howard tweeted. Fandango‘s Erik Davis took to Twitter to share that Love and Thunder is “big, colorful, and weird,” and gives particular shoutouts to newcomers Christian Bale, as the villain Gorr the God Butcher, and Russell Crowe as Zeus.

We were also eager to hear the reactions to Natalie Portman’s transformation into Mighty Thor, the Mjolnir-wielding badass who, long ago in a very distant Thor past, played Jane Foster, Thor’s love interest. Portman comes in for heaps of praise, and it sounds like not only does she help make Love and Thunder surprisingly moving, her pairing her with a fellow ass-kicker in Tessa Thompson’s Valkryie sounds like a match made in heaven.

In case you haven’t been following our Thor: Love and Thunder news, the basic outline of the plot is fairly simple—Jane Foster is back, only now she’s Mighty Thor, and Thor’s retirement plans are put on hold when a sadistic god and goddess-killing lunatic named Gorr the God Butcher shows up. Gorr’s arrival means Thor’s going to need his friends to help him, including Mighty Thor, Valkryie, Korg (Waititi), Miek, and the Guardians of the Galaxy. This super-team will take on a super-creep, and the results sound divine.

holy shit. #ThorLoveandThunder is the perfect blend of taika at his best with comedy and a punch to the gut all in one. i left this movie emotionally satisfied while also sobbing and just perfection. we stan a dad rock soundtrack. in the words of my new favorite characters: AHH pic.twitter.com/MytduVq89h

Another classic Thor adventure! #ThorLoveAndThunder is everything I wanted it to be. Big, colorful, weird Guns N’ Roses-fueled battles to go w/ a hopelessly romantic story about discovering love in unexpected places. Christian Bale & Russell Crowe are especially great. And Korg! pic.twitter.com/fu0gTUuMRj

#ThorLoveAndThunder is absolutely AMAZING. It blows every other Marvel movie out of the water, and doubles down on the Ragnarok charm. A classic @TaikaWaititi joint, so many laughs and tears, with a moving narrative and beautiful visuals. And those post credits? OH MY GOD. pic.twitter.com/41iuRXPf0O

#ThorLoveAndThunder just cemented itself as one of my favorite MCU films. Bursting w/so much heart, emotion & sincerity, I teared up, I smiled from ear to ear. This film is a warm hug & plea to cherish the present, live in the moment do something that matters. I adore this film! pic.twitter.com/FYnwC2Gyqv

Portman comes in for high praise as the newly minted Mighty Thorr. And Bale does crucial work in making a thrilling, chilling, and at times campy villain in Gorr the God Butcher:

Wow!! #ThorLoveandThunder is great! The best entry in Phase 4 behind Shang-Chi and No Way Home. I laughed. I cried. Then I laughed and cried some more, in that order. Natalie Portman is FINALLY given her due. Dr. Jane Foster is more than worthy of being the Mighty Thor.⚡️ pic.twitter.com/oOop89P1uf

Christian Bale is phenomenally menacing as #ThorLoveandThunder’s villain, Gorr the God Butcher. One of the creepiest Marvel villains we’ve ever seen on screen. Gave me some Dark Knight Ledger Joker vibes at one point. pic.twitter.com/zsg9SNXfqY

THOR: LOVE AND THUNDER is a rockin’ great time with electrifying action, lots of laughs (the screaming goats!) & a profound story on absent gods & our desire for love. Natalie Portman makes a mighty return & Christian Bale slays it as the terrifying Gorr. The best Thor film yet! pic.twitter.com/s42SkqxlJj

#ThorLoveAndThunder is predictably hilarious yet unexpectedly personal and heartfelt. Christian Bale and Natalie Portman’s performances truly shine while Waititi delivers an emotional story. I think this may be my favorite Thor movie. pic.twitter.com/i7BpmQHvQ1

#ThorLoveAndThunder is everything great about comic book movies! Truly hilarious insanity, heart wrenching tragedy, and bombastic action! Visually stunning and one of the best MCU soundtracks. The entire cast is fantastic, but Christian Bale and Natalie Portman are phenomenal! pic.twitter.com/dVkpf54fmP

If you, like me, take delight in watching Christian Bale slurp up the scenery while gobbing out that black ink Danny DeVito had in Batman Returns, then #ThorLoveAndThunder is for you.

#ThorLoveAndThunder is a vivid and vibrant blast that delivers. Hemsworth’s Thor remains a jewel in Marvel’s crown. Bale’s Gorr is a killer boogeyman blending the campy and the creepy. Portman’s Foster and Thompson’s Valkyrie are a top notch pairing. Crowe’s Zeus is *chef’s kiss* pic.twitter.com/PDb5SZRWOo

I saw #ThorLoveAndThunder. It can’t quite match the visual or comedy bombast of Ragnarok, but Taika Waititi makes up for it with an emotionally mature Marvel movie. It’s also very funny (Natalie’s got jokes) and features one of the most stunning visual sequences in MCU history.