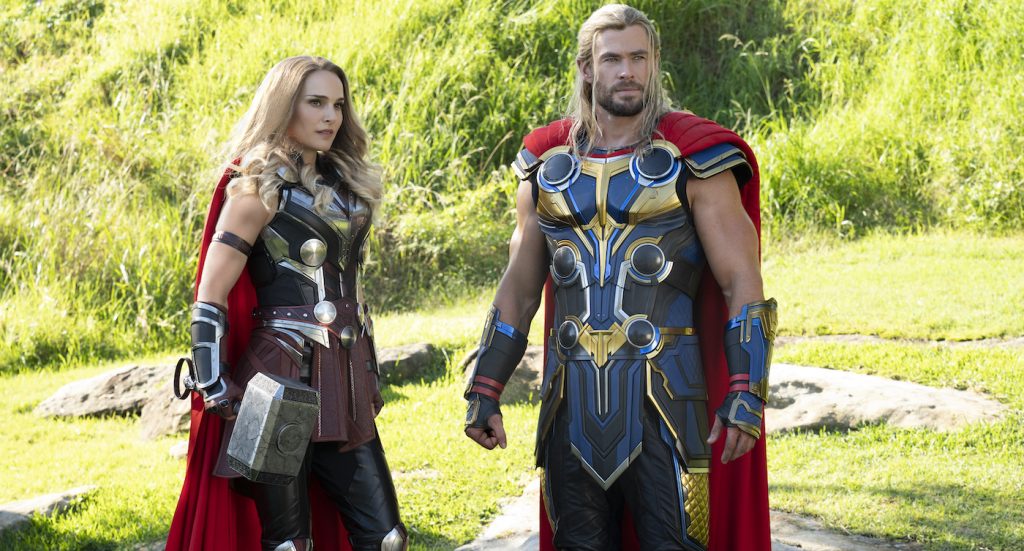 We’ve got a fresh look at Jane Foster as the Mighty Thor.

Natalie Portman’s return to the Thor fold in Taika Waititi’s upcoming Thor: Love and Thunder as Jane Foster would have been exciting enough, but we’ve known since Comic-Con 2019 that Portman’s Foster would also be Mighty Thor. Here’s how Waititi revealed that bit of news way back when:

Now, Marvel has revealed a new image of Portman as Mighty Thor, holding Mjolnir, the magical hammer we all know and love. Seeing Jane Foster as Mighty Thor certainly shocked regular old Thor (Chris Hemsworth, of course) in the first trailer for Love and Thunder, and we’re guessing it’ll take him most of the movie to get over it. In fact, Thor: Love and Thunder finds the God of Thunder in a reflective mood and on a new kind of quest—one to find inner peace. Yet we know that Thor will have to get into the action eventually, and thus he’s lured into yet another battle by a cosmic psychopath called Gorr the God Butcher (Christian Bale) who plans on killing all the gods. In order to defeat Gorr, Thor will need his old pal Valkyrie (Tessa Thompson), Korg (Waititi himself), and, yes, Jane Foster.

In another new image, we see Thor definitely in battle mode as he dons his black armored chest plate, that lush fur cape, and Stormbreaker, his post-Mjolnir weapon. Thor: Love and Thunder is easily one of the most hotly-anticipated films in MCU’s Phase 4, and it’s the next one up, too. The cosmic action gets underway when Thor: Love and Thunder premieres on July 8.

Check out the images here:

Here’s the official synopsis for Thor: Love and Thunder:

Marvel Studios’ “Thor: Love and Thunder” finds the God of Thunder (Chris Hemsworth) on a journey unlike anything he’s ever faced – a quest for inner peace. But Thor’s retirement is interrupted by a galactic killer known as Gorr the God Butcher (Christian Bale), who seeks the extinction of the gods. To combat the threat, Thor enlists the help of King Valkyrie (Tessa Thompson), Korg (Taika Waititi) and ex-girlfriend Jane Foster (Natalie Portman), who – to Thor’s surprise – inexplicably wields his magical hammer, Mjolnir, as the Mighty Thor. Together, they embark upon a harrowing cosmic adventure to uncover the mystery of the God Butcher’s vengeance and stop him before it’s too late. Directed by Taika Waititi (“Thor: Ragnarok,” “Jojo Rabbit”) and produced by Kevin Feige and Brad Winderbaum, “Thor: Love and Thunder” opens in U.S. theaters July 8, 2022.