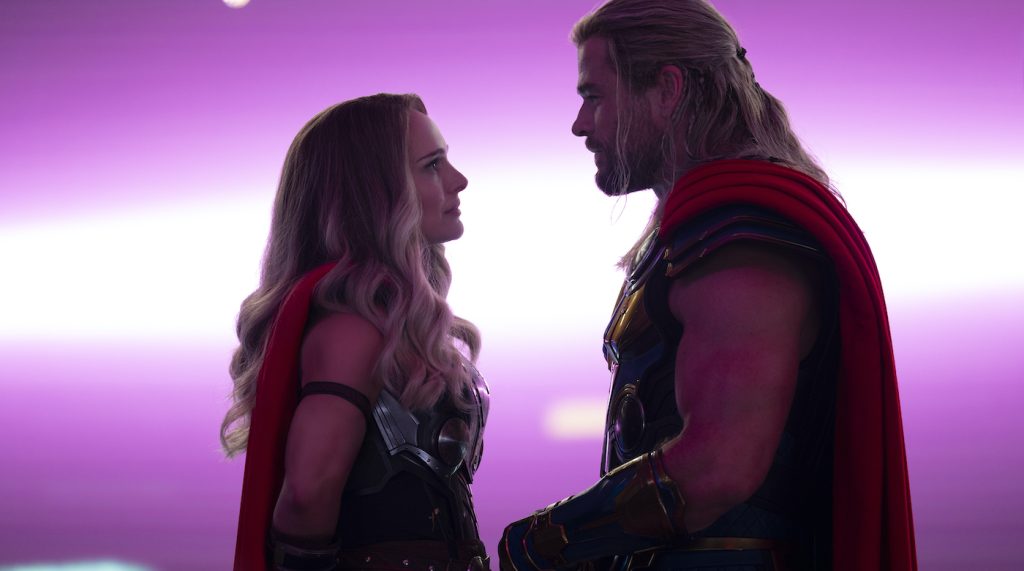 Marvel has revealed new Thor: Love and Thunder photos, including one of a Goddess (Natalie Portman’s Mighty Thor, and one of a God Butcher (that would be Christian Bale’s Gorr)—two new sparring partners in the MCU’s hotly-anticipated next film. Following the ripping new trailer released just a few days ago, we’re now starting to get a better picture of what co-writer/director Taika Waititi’s sequel is all about.

Here’s what we’ve learned thus far: Thor (Chris Hemsworth, naturally) has grown tired of the superhero life. I mean, how many times can you save Earth, or any number of other planets, before it all starts to feel very same-y? So when Love and Thunder begins, Thor’s looking for a new path, a more peaceful path—that’s until Gorr the God Butcher shows up.

With Gorr on the scene, Thor will need to get back into battle mode, but he’s going to have help. Valkyrie (Tessa Thompson) will be there, as will Thor’s buddy Korg (Taika Waititi), but he’ll get an unexpected boost from Jane Foster’s (Portman) return. Only Jane has a new name—Mighty Thor—and she’s got the magical hammer Mjolnir to prove it.

The new images show us our two Thors locked in a romantic gaze (we think) as you see in the featured image above, and then one of Portman’s Mighty Thor and Thompson’s Valkyrie. Then there’s Bale’s Gorr the God Butcher, looking like a pale wraith without an ounce of warmth to his soul. This should be a good time!

Check out the new images below. Thor: Love and Thunder arrives in theaters on July 8:

And here are the first images Marvel revealed: