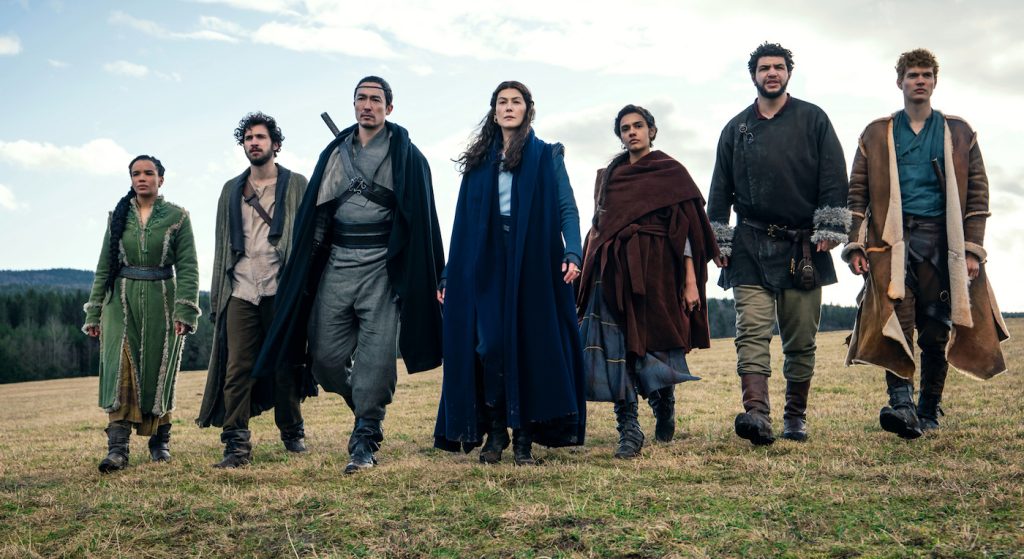 Amazon Prime’s sprawling sci-fi saga The Wheel of Time was one of the streamer’s big hits in 2021, and also one of its biggest swings. Adapted from Robert Jordan’s sweeping fantasy novels (14 in all), The Wheel of Time arrived on Prime and swiftly became the most-watched series premiere of 2021 and one of the top 5 series launches for Prime Video, ever. The interest stemmed from the love for Jordan’s source material, but it was maintained by the level of craft that went into nailing the adaptation.

One of the keys to the series’ success was cinematographer David Moxness, who helped give creator Rafe Judkins’ The Wheel of Time an appropriately sumptuous visual palette. The story is centered on the fateful journey of Moiraine Damodred (Rosamund Pike), a member of the Aes Sedai, an all-female order of enchanters with magical abilities to spare. Moiraine, as is the wont of many fantasy protagonists before her (looking at you, Bilbo and Frodo), goes on a quest to Two Rivers to find the incarnation of the Dragon, a mysterious (and portentous) figure that signals the end of an age. The tricky part? Moiraine doesn’t know which one of the young locals in Two Rivers might be the Dragon.

Soon enough, Moiraine and some potential saviors are forced to flee Two Rivers and head for the Aes Sedai stronghold. It’s the journey to Aes Sedai that makes up most of season one, and there are enough twists, turns, jaw-dropping visuals, monsters, magic, and massive battles along the way to make The Wheel of Time the most satisfying post-Game of Thrones, pre–The Lord of the Rings: The Rings of Power epic.

We spoke to Moxness about turning the book’s descriptions of visual splendor into actual visual splendor, lighting a world lit only by fire, and managing all this while shooting in some very difficult locations.

How did you begin to conceptualize how this massive fantasy world Robert Jordan created could be adapted for the small screen?

It was a big undertaking to be sure. One of the first things I did when I found out about the series was I downloaded the audiobooks and was immediately captured by how big of a world it was. The way Robert Jordan wrote the material was so visual, with so much detail about the different characters and different worlds. I was bombarded with images in my mind about what this world was and could be. It was pretty obvious to see this was going to be a real epic.

Where did you do most of your shooting?

We were based out of Prague, where our offices, studios, and stages were there, but we shot largely out in the countryside outside of Prague. All in and around the Czech countryside, then also in Slovenia and Croatia, and we had a unit shoot some stuff in Spain. We were with such great people and shooting in the Czech Republic was amazing. The international crews from all over were fantastic. It really shows what a wonderful thing we do, technicians and artists come from all over the world, and we can all get together and come together so quickly and collaboratively.

A lot of the series involves characters on the move in natural environments, how did you approach shooting in these challenging places?

Our characters and actors are on horses a lot, and it’s a lot more difficult to film those scenes. There are safety concerns for the actors and for the horses, and some of the journeys were quite lengthy, in terms of scene length or the length of the take. It was tricky, we used different approaches for each moment based on what type of shot we needed and the environment we were in. We were often in very mountainous or forested areas, which are difficult to work in during the best of times. We had a large electric ATV-type of vehicle that we rigged and mounted the camera on and used that to track our characters. Sometimes we’d use a cable cam strung between trees to follow along, and other times we’d use a Steadicam operator on the ground tracking along with them. It all depended on the shot. It’s amazing the technology that exists now, and we have skilled technicians to rig those kinds of techniques.

Tell me a bit about some of the techniques you deployed to capture what’s arguably one of the most ambitiously shot series since Game of Thrones?

One piece of technology was a high-speed BOLT motion control sequence, which allows for high camera rotations for one sequence. It’s a motion-controlled arm system that goes on a set of rails like a dolly track, and you mount the camera to the robotic arm that you can control with a computer. It’s all very quick and precise, and you can program the camera so it will go to the same exact same position every time. We used the Phantom 4K flex camera, which can go at an extremely high speed, and we used this for the battle sequence for the opening of episode seven.

What were some of the other most challenging sequences for you?

Obviously, the epic battle sequence in episode one. That was the first large-scale piece that we did with so many performers, and stunt performers, and it was such a lengthy sequence—it lasted all at night. It was a big undertaking. Even the epic landscape work we did in Slovenia was challenging. It was a very difficult location to get to, but very rewarding in the end. We went in on trucks, then 4X4 quads, then we walked the rest of the way. We were sort of in the Italian Alps, very close to the Italian border, high up in the mountains. It’s kind of like shooting an IMAX National Geographic piece. You can’t drive across a parking lot and start filming, but the reward of being able to photograph those types of areas is phenomenal. There’s a real vibe and feeling that I think comes across in the work when the environment is real. I give a lot of credit to our creators to allow us to shoot this practically in those locations. All our digital manipulation in those scenes are enhancements to extend the mountains higher and further, but all the base photography was real. I think it was a real gift to be able to do that.

The fantasy saga is set in a world without modern lighting—how did you mimic natural light?

Yeah, in our world there are no contemporary light sources, it’s all candles and flame. Much of it came down to camera and lens choice. Augmenting our camera lighting effects to blend and compliment the source the imagery was coming from, whether the source was a flame, the moon, or the sun.

Your background includes lensing for series like Smallville for the CW, Lethal Weapon on Fox, and ABC’s Whiskey Cavalier, but what was it like taking on a fantasy series of this size and scope?

I got into fantasy more as I was going. I have a pretty eclectic background. A lot of sci-fi and different things, but nothing to this scale of the fantasy genre, so that was really refreshing to dive headfirst and take on this amazing world.

On a scale of one to ten, where would you put the level of challenges filming The Wheel of Time presented?

It was an eleven. It was a big undertaking, but we had an amazing team, our writers, our creator, the cast was phenomenal, and our crew was just terrific. Everybody was on board and really dedicated But we couldn’t have done it without the strong film crew we had. I’m proud of it, we really wanted to put our own stamp on this, and one thing we wanted to do is lean into color in this show because color is a very important thing for these characters. It’s easy to get into a desaturated, cool, bluish tone to the work, but we kept colors in our palette. It’s easier said than done, but I’m very happy with where we ended up.

The Wheel of Time season one is streaming on Amazon Prime Video.