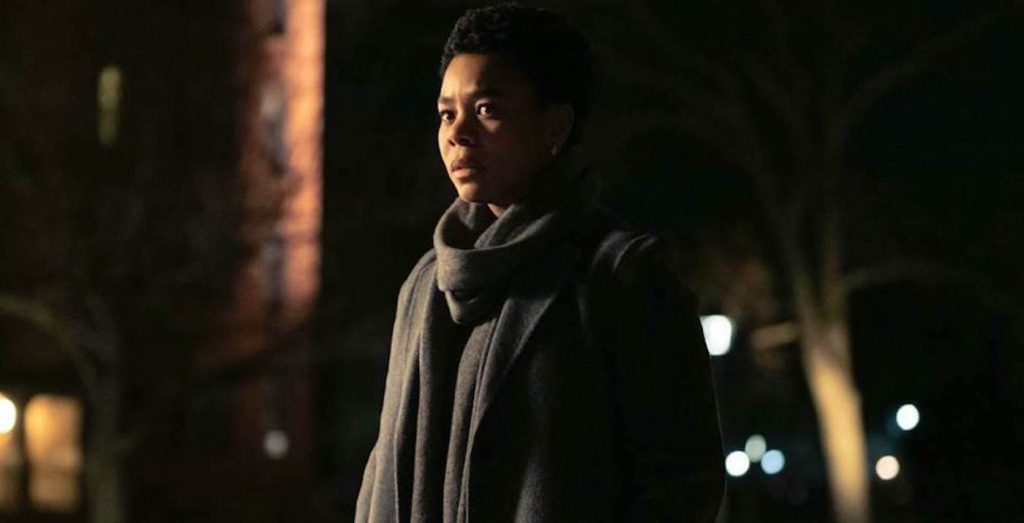 Writer and director Mariama Diallo brings atmospheric horror to the world of academia in her directorial debut Master, which just premiered at the Sundance Film Festival. The film stars Regina Hall as professor Gail Bishop, who has recently been made the first Black woman to hold the position of residence hall ‘Master’ at a prestigious fictional university called Ancaster. Both she and a fresh, optimistic Black student Jasmine (Zoe Moore) begin to feel a menacing supernatural presence. Is it the pressure and weight of the many microaggressions from the nearly exclusively white student and teacher body? Or, could it be the malevolent spirit of Margaret Millett, a woman condemned centuries past as a witch?

In creating this genre film about the complications of female competition, elitism, bigotry, and supernatural power, Diallo enlisted the aid of cinematographer Charlotte Hornsby, with whom she worked on her award-winning short Hair Wolf. The Credits spoke to Hornsby about collaborating with the director on the visual language of Master, both in creating the world of Ancaster, and the oppressive, menacing atmosphere that pervades the film.

Master has a look and lighting inspired by some great horror films in history, including Rosemary’s Baby, Let The Right One In, The Shining, and Argento’s Suspiria. What are some specific examples of how genre films were touchstones for you as cinematographer?

All of the references that you mentioned were huge inspirations for us. Going into this film, Rosemary’s Baby was a big inspiration with the opening sequence. We wanted it to feel like the point of view of Ancaster College itself, like this dark presence that’s looking from this impossible vantage point where you see the huge, ominous campus. Then we start to slowly zero in on an unsuspecting Gail Bishop, who is just walking to her new home. Suspiria has that deep rich red that became a refrain with our emergency light sequences, and our fire alarm that starts to bubble up from the surfaces. The menace of the film starts to rear its head as we move on. Hour of the Wolf, a black and white film, was another because the camera movement is really effective. There’s this dizzying sequence in that film when the artist first comes to a dinner party of these characters that are mocking and tormenting him, and the camera just spins rapidly around the table, and we are overwhelmed by these leering faces. We really wanted to bring that same energy to the tenure scenes, where Regina Hall’s character Gail is just up against these fellow academics, so that by the time we reach the faculty party at the very end they’re almost jaundiced and rotten in the way that they’re lit and the way that their features are under-lit and contorted.

The building has its own kind of menacing presence, and it feels complicit in the racism. What are some ways in which you made the buildings themselves feel oppressive?

In scouting the Master’s House, we wanted a facade that had that old money, elite, almost British country cottage charm, but with this feeling that you could get camera angles inside the house, where we felt like the house was spying on Gail. That complemented the sound design where there’s this bell that’s always summoning her deeper into the heart of the house, which ultimately is upstairs to the maid’s chambers. It was really important to Mariama when we were scouting that we find a house that had this back staircase right from the pantry that would be the maid’s access to the kitchen. That was the really narrow staircase that led up to the room where she finds more secrets about the history of the house. We also wanted Jasmine [the student]’s room to feel, from the start, like there was something off about it.

How’d you approach creating that feeling?

We have this shot when Jasmine first arrives that is the dorm room’s point of view of her, and we’re narrowing down on her to echo the way that the school is zeroing in on Gail. I talked with my gaffer about what would make it can feel off, almost like the needle in Sleeping Beauty that lures her, something that feels like there’s a spirit there, or a presence already in the room. So we got our production designer [Meredith Lippincott and Tommy Love] to get this beautiful, warped glass that we could shoot through that would make these patterns on her side of the room. She’s just drawn to explore a little further and touch the surface of the wall so that we initially feel a sense of unease.

Master’s lighting at night both inside and outside evokes colonial times, which subtly suggests the Salem witch trials. It also feels painterly, and there are paintings that figure in the story. Did you discuss or study artists in particular for that look?

From my role as a DP, I studied Vilhelm Hammershøi. I have a huge stack of images on my desktop and in my apartment. He has this brutally cold, under-lit moonlight that he conveys in a lot of these interiors, where he’s under-lighting a space to feel eerie and unnerving. I looked a lot at this study he did of his house, and a sketch or unfinished painting that is all these lamp-lit, faceless people around a table that I was completely alarmed by and really got under my skin in the best way. I thought about it a lot and showed it to both my gaffers for that final faculty party. Production designer Tommy Love either found or commissioned this incredible painting of Margaret Millett, the Witch. It’s this ghastly, huge portrait that he situated opposite the reception desk at the library, and everyone was so freaked out by the painting that Mariama and I knew we had to start the scene with it filling the frame. It reveals the visual of this presence that is haunting Jasmine, whose true identity is unknown.

It also gives a matriarchal quality to that scene which extends into the whole film, because it is the story of three women and a haunting female presence. It’s also a portrait placed in a space that is about education and knowledge.

That’s awesome that you picked up on it being this explicitly female energy because I think that was really important for Mariama in creating the witch myth. So much of the film is Jasmine’s having to navigate the social politics of her classmates. Mariama writes the scenes with group dynamics so well, with Jasmine, Cressida [Ella Hunt], and Katie [Noa Fisher]. How women can be cruel to each other is so different from how men are to each other, or men are to women. It is its own ecosystem that, when someone gets it right, you feel so gratified as a woman. It really is explicitly a story of women navigating this space of privilege in addition to race. It is about the cruelty of competition that is unique to women that men don’t share, that constant feeling that as women there’s only room for one of you, the phenomenon that no women interrupt men in the class, and then as soon as one woman speaks, and the other one interrupts, because it’s like, “Oh, this is our time. This is time to talk.”

Master premiered at Sundance 2022 on January 21st and will premiere globally on Amazon Prime on March 18th, 2022.