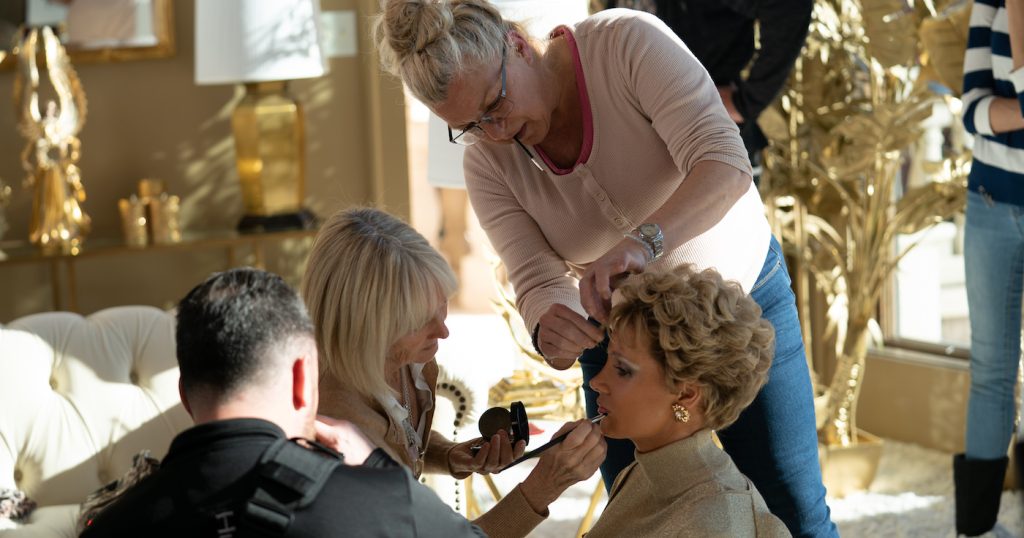 Come this Sunday at the 94th Academy Awards ceremony, Linda Dowds, Stephanie Ingram, and Justin Raleigh may all win their first gold statuette for hair and makeup. The makeup department head, hair department head, and head special makeup effects artist, respectively, are nominated for The Eyes of Tammy Faye, the biopic starring Jessica Chastain, nominated for lead actress, and Andrew Garfield as the renowned and scandal-ridden evangelists Tammy Faye and Jim Bakker. The team has already received BAFTA and Critics Choice Awards, among other accolades.

While the film was Raleigh’s first collaboration with his teammates (and with Chastain), Dowds and Ingram have worked with the three-time Oscar contender on some 15 films and are currently helping to create her look for a miniseries about country singer Tammy Wynette.

The Tammy Faye project was meant to launch a few times, reveals Dowds, so the team had extra time for homework, which involved drawing from footage, album covers, articles, books, clips from the Bakkers’ PTL show, and more. Chastain had acquired rights to adapt the documentary of the same name many years earlier and had her own “Tammy treasure trove,” which she shared with them.

The film also necessitated research into the periods in which it is set, says Dowds. “What were the makeup colors of the time? What were the styles? What were the looks?” she points out, later noting that the documentary was particularly helpful in adding to the visual binders and boards created by the team to capture imagery and refer to their combined knowledge about the Bakkers and those years.

Among the pearls was Tammy Faye’s take on her own signature look, for which she applied mascara on fake eyelashes, embraced all things color, and used drugstore cosmetics. “She loved pinks and she was very ‘matchy-matchy,’” Dowds adds. “And then she moved into darker tones and the burgundy wigs, and the rich reds and plummy tones translated into her lips and nails, and her eyes became darker and that’s where she did her tattoo makeup. So I think overall there were three stages in the types of palette tones that I used. But she gave that to me; she showed me the way very, very much so.”

For Ingram, much consultation was conducted with Chastain to fashion a dozen wigs in a variety of styles, shades, and lengths that accurately represented Tammy Faye’s radically changing coifs over the years — including one wig worn underneath another that bared the character’s sparse hair. With the exception of one, all the wigs were made from human hair.

Prosthetics also played an integral role in transforming Chastain and Garfield, who portray the Bakkers in their youth and then through the ensuing decades. Raleigh had roughly six weeks to pull it all together and did a lot of the initial conceptual work using ZBrush in Photoshop, a 3D digital sculpting program. He complemented this with traditional clay sculptures to home in on the anatomical aspects for likeness and age progression.

Three stages of silicone prosthetics were required, and during the process, Raleigh would fly back and forth between the set in North Carolina and his studio in Los Angeles to make adjustments. Stage one for Chastain involved fuller cheeks, a chin appliance to fill in her dimple, and invisible tape to pull up the tip of her nose; for stage two, which addressed Tammy Faye’s weight gain, a full neck, chin piece, upper lip appliance, and larger cheeks were applied in addition to the tape on the nose; and for stage three, no nose tape, but all else from stage two as well as the back of the neck and stretch and stipple aging technique around the eyes, on the forehead and in between the furrow of the brow (and on the hands). Garfield is similarly in prosthetics throughout the film.

“There was really no time for hiccups at all. We had to be very efficient and very on top of it,” Raleigh says, noting that shooting in continuity was beneficial. “I think we just had the luxury of Jessica and Andrew really wanting to develop the characters in continuity and feel that progression themselves from an actor’s standpoint … whereas normally a lot of times we would be bouncing between multiple different timelines on some shows.”

Ingram agrees “it was lovely to shoot in continuity,” but for her work she adds that “in a project of this size, the only way to attack it and to be on the ready is to have everything basically approved, that Jessica be happy, and have the wigs set and prepped, ready to be used in any situation.”

Dowds, too, enjoyed the linear transitions and found watching Tammy Faye “grow in her world” advantageous. When it came to the evangelist’s larger-than-life appearance, Dowds references the late-night talk shows’ mocking depictions and says the team was careful not to cross the line into caricature. “We all had a lot of dialogue and conversation about how do we get there and not push to that other side. So we were very thoughtful about her all the time, and because everything flowed in that kind of following the time periods, I think it was really helpful for that.”

Time in the hair and makeup chair for the actors ranged from around two hours for stage one to around four-and-a-half hours for stage three. And while the team worked symbiotically to master the process, the task to craft the characters’ looks overtime was daunting.

“Everyone knows what Jessica and Andrew look like. Anyone can go look up what Jim and Tammy look like, so how do you create a successful and subtle, realistic version of those characters that never become garish, especially with Tammy because her makeup is so intense.” offers Raleigh.

“It was just constant communication [among the team],” he adds. “And we never wanted the makeup to pull you out of the performance. I think that was the key part. So there was always a balance and Jessica was a great guiding force in that as well, because I think she would feel like if it was too much or not enough, she would help push us and guide us.”

“The second thing was that she was a real-life person, so we wanted to be as authentic as possible and also respectful. With everything that went on around her, that she stood her ground, she said, ‘this is me.’ She was the best person that she could be every day. I believe she really was such an empathetic and incredibly strong person and stood her ground like that. I wanted every day, people to walk away [after] seeing the film [to know] that we had done everything that we could to say, ‘look at this incredible woman’ and to value her.”

For more interviews with Oscar nominees, check out these stories: