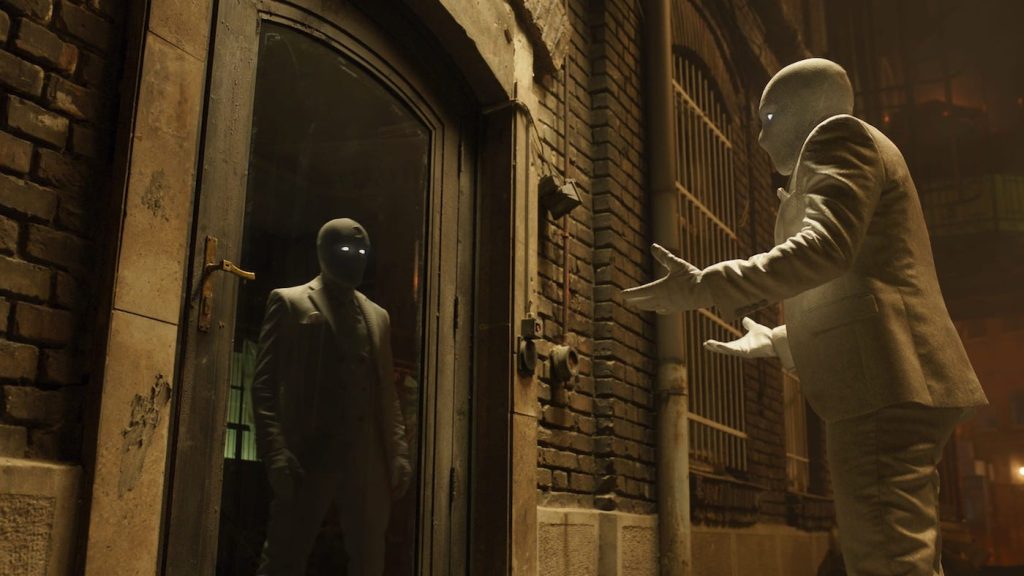 Marvel Studios has revealed the first official clip from Moon Knight, their upcoming Disney+ series starring Oscar Isaac as the titular superhero. Isaac’s character, Stephen Grant, believes himself to be a mild-mannered gift shop employee, a man whose life is anything but extraordinary. Yet Stephen’s got a secret—one he’s been keeping from himself—he’s also Marc Spector, a mercenary whose life is the dangerous polar opposite of Stephen’s quiet existence. In the first clip, we see Stephen having a serious panic attack (well earned, we might add) as he watches what appears to be a monster coming down the hallway towards the elevator he’s cowering in. In one reality, that monster is Khonshu, the Egyptian god of the Moon. In another reality, the one Stephen has been living in, when the monster makes it to the elevator doors, it turns into a kindly older woman.

Moon Knight will explore the Stephen/Marc dynamic, and the mental health issues that Stephen grapples with. Are his visions real? Is he actually a mercenary with a connection to dangerous villains and Egyptian gods? Isaac said in a previous featurette that the new series is “a real, legitimate character study” that akes the mental health aspect of his character “incredibly seriously.” Co-star May Calamawy says that the tone of Moon Knight is “like Fight Club meets Indiana Jones,” which is certainly something we’ve never seen before in a Marvel series.

Moon Knight also ushers in Marvel’s expansion into the supernatural realm, which will include the upcoming films Morbius, starring Jared Leto, and the Blade reboot starring Mahershala Ali.

“For me what’s really exciting is that it’s totally unpredictable,” Isaac says. That sounds like our kind of series. Check out the new featurette below. Moon Knight arrives on Disney+ on March 30.

For more on Moon Knight, check out these stories: