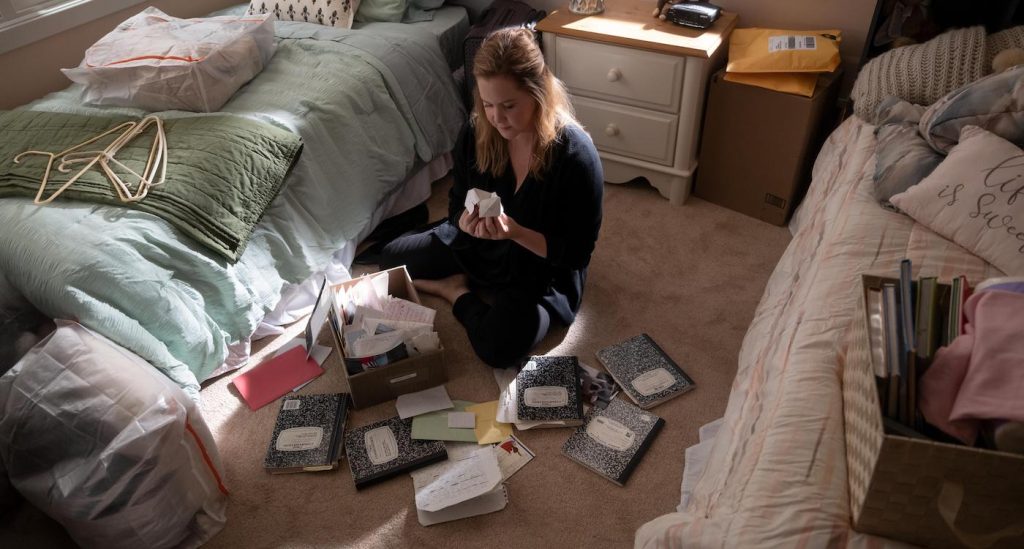 When she co-hosts ABC’s Oscar telecast on March 27, Amy Schumer will likely deliver the kind of withering punch lines that forged her reputation as one of America’s most daring comedians. But in her new Hulu series Life & Beth (which debuted on March 18) Schumer brings unexpected angst to her title character, an unhappy wine salesperson trying to make a fresh start in the face of death, disapproval, and dysfunctional family ties. Like Ricky Gervais in his existential After Life, or former SNL star Bill Hader as a guilt-ridden hitman Barry, Schumer tills deeper, darker territory in the show, filmed by cinematographer Jonathan Furmanski.

Life & Beth serves as a homecoming of sorts for Furmanski, who served as DP for Inside Amy Schumer back in 2013. “Amy’s a very loyal person,” says Furmanski, whose recent work includes four seasons of Search Party and two episodes of The Drop Out about Silicon Valley con artist Elizabeth Holmes. “Amy wants a family atmosphere and if she likes somebody — editors, producers, directors — she does what she can to keep them around. The majority of the cast are her friends, either from the stand-up world or just friends who work in radiology or something and come in for a day to do a bit part.”

Speaking from his home in Long Beach, Furmanski breaks down his favorite Life & Beth shot, describes The Graduate as an influence, and explains why he likes to operate the A camera himself.

How did you get started with Amy Schumer?

I was shooting a show called Delocated for Jon Glazer, who’s a fixture in the New York comedy community. He brought on Amy for a bit part and that’s where we met. When Inside Amy Schumer got greenlit by Comedy Central, I think was the only DP she knew. She asked me if I’d like to shoot her show and of course, I said yes.

Inside Amy Schumer really put her on the map. As DP, what was your approach in making the comedy pop?

I never approach comedy as something you shoot in a certain way. When I did the “12 Angry Men” sketch, the comedy came from the [black and white] camera work mimicking what that original film was. It wasn’t like, “Oh here’s the funny shot.” It was about: “We’re trying to make that movie again, and it just happens to be the funny version, where the jury’s debating if Amy’s hot enough to be on television.”

Those sketches are so crazy. How do you contrast that with the tone for Life & Beth?

In the last few years, Amy’s done projects about her pregnancy or in the cooking show she did with her husband. I think she’s been going more for truth in storytelling as opposed to screwball comedy. Life & Beth is rooted in her real-life experience. Because of that, in a lot of ways, it’s more of a drama that has comedic elements.

How did you go about evoking this somewhat more dramatic tone?

The directors and executive producers wanted the show to be shot more like a movie from the seventies as if we were doing The Graduate or Manhattan or something like that. How can we get an aesthetic that feels a little more thoughtful, rather than having it be just about coverage and wide shots and two-shots.

Toward the end of the pilot, there’s this handheld shot that follows Amy into a bar, she meets her co-workers, gets this dramatic phone call – – I don’t want to spoil it – – and then has to go up on stage and sing this borderline silly karaoke song. From a production standpoint, it was challenging because you spend the first half of the day figuring out how you’re going to do the shot. We did I think four takes, each time all the way through. That was a fun way to get into Beth’s headspace. With that one shot, we got the dynamism, we got the drama, we got the comedy. It opened up this whole world of options.

Life & Beth has quite a few flashbacks to our hero’s childhood. Did you change lenses or switch up the palette when you filmed scenes set in the past?

I didn’t want there to be a big shift from the present day to the mid-nineties because I didn’t really want it to feel like we were going back in time. What happens in the flashbacks are the seeds of Beth’s emotional state right now and I wanted those memories to feel fresh.

Where did you film the show?

Can you talk about that sequence in the countryside when Beth’s potential boyfriend John – – Michael Cera – – shows her around his farm.

This vineyard area allowed us to do a beautiful dolly shot. We’re moving through the trees, far from Beth and John, almost like we’re eavesdropping. It’s a big swing, covering two and a half pages of dialogue from 100 feet away. We can’t see their faces at all, just their body language but it’s more about the environment than the emotion. I think the shot works because it supports in an observational way how Beth has been suffering as a character, professionally, romantically, just in life. And then we came back close again. But it was important to spend time in the environment rather than just do close-ups on people the whole time or doing Steadicam shots. Nothing wrong with Steadicam, but that would be more of an expected choice compared to the way we did it.

Which lenses did you use to shoot Life & Beth?

I used new lenses from Panavision which don’t have a name yet, but they had a little bit of warmth and wouldn’t look too sharp on a modern digital camera sensor. I also used Sphereo lenses, which blew me away. [Three-time Oscar-winning cinematographer] Robert Richardson helped design them. They give you texture and a certain amount of curvature that I wanted

What kind of camera?

Sony Venice which is not quite 6K [resolution]. We shot probably 75 percent of the show with one camera.

Which you operated yourself?

Yes. If I’m being totally honest, I think operating is the best job on the set. Maybe it comes from my documentary background, but you can get involved in every shot without the stress of taking your work home with you. For Life & Beth, I told the producers I wanted to operate the A camera because I want to be close to Amy. I want to hear everything she talks about so I can think about what she’s thinking about. Except for the Steadicam stuff, I felt physically connected to everything we shot. After a while, the camera becomes an extension of your body and you feel kind of naked without it. Shooting Life & Beth, I wasn’t just a cog in the machine. In a way, I was the machine.

I imagine when you operate the camera yourself, it allows for more spontaneity with cast and crew?

Sure. I can come up with ideas and think on my feet quickly because I’m right there. “How about we try this?” You change a couple of marks, talk to the camera assistant and in thirty seconds you have a brand new shot. It’s nice to work like that. When my eye is on the eyepiece, it’s like I’m in the story.

When you’re literally closer to the actors, you’re going to feel the scene in maybe a more intimate way?

I’m not a spiritual person but sometimes there’s an energy in the room you can grab onto, and that propels you in a certain direction. Operating the camera enables you to react in ways that you might not be able to acknowledge when you’re sitting 40 feet away.