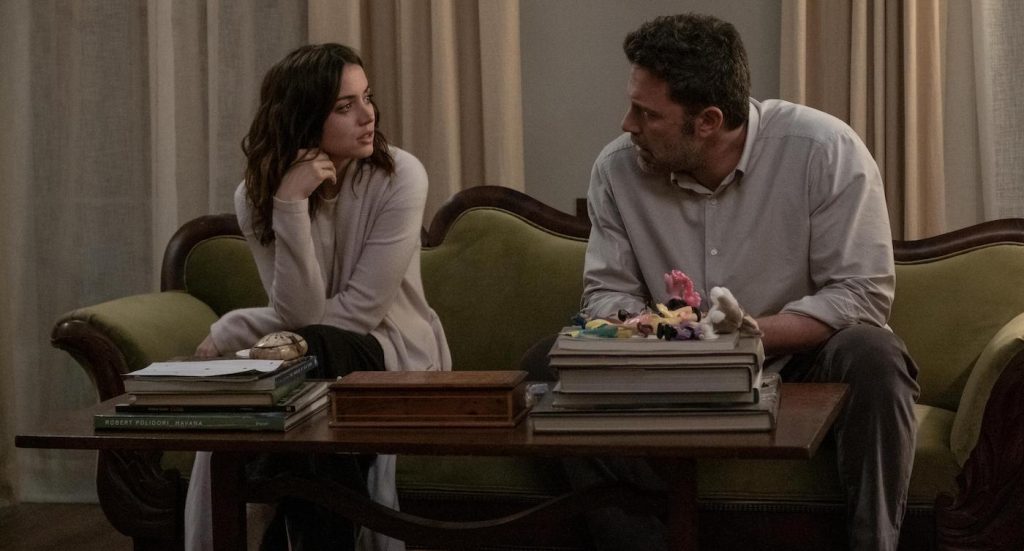 What a combination of talent and source material. Director Adrian Lyne has summoned Ben Affleck and Ana de Armas to take us into Deep Water, Lyne’s adaptation of Patricia Highsmith’s novel of the same name that follows the very dangerous games played by two deeply troubled lovers. Now, Hulu has dropped the official trailer, revealing Affleck and Armas as Vic and Melina Van Allen, a seemingly picture-perfect couple who have a serious dark side. Highsmith has already furnished cinema with great source material from her shimmeringly dark novels, including “Strangers on a Train” and “The Price of Salt” (later re-published as “Carol” adapted by Todd Haynes), but there is perhaps no Highsmith book-turned-movie that’s better captured her particular brilliance than Anthony Minghella’s adaptation of her novel “The Talented Mr. Ripley.” Deep Water slides into some very good company.

Screenwriters Zach Helm and Sam Levinson have adapted Highsmith’s novel and the first trailer makes clear just how dire the stakes are in Vic and Melinda’s games. Melinda is a woman who cannot, or will not, be tied solely to her husband alone. Yet Vic’s role in his wife’s extramarital affairs is opaque—everyone knows what she’s up to, yet Vic seems to tolerate it out of deep love and desire for her. Unless Vic isn’t so innocent himself? When one of Melinda’s trysts takes a fatal turn, the curious couple’s lives, and the lives of the people caught up in their games, will begin to unravel.

Deep Water has an old-school, sexy, dangerous vibe, recalling not only The Talented Mr. Ripley but other classics of the genre, both new and old, from Tom Ford’s 2016 film Nocturnal Animals to Adrian Lyne’s very own Unfaithful, in 2002. With Affleck and Armas, Lyne has given himself two potent, A-list performers to tease out this dark tale.

Check out the trailer below. Deep Water premieres on March 18 on Hulu.

Based on the celebrated novel by famed mystery writer Patricia Highsmith (The Talented Mr. Ripley), “Deep Water” takes us inside the marriage of picture-perfect Vic (Ben Affleck) and Melinda (Ana de Armas) Van Allen to discover the dangerous mind games they play and what happens to the people that get caught up in them.

Featured image: Deep Water — Based on the celebrated novel by famed mystery writer Patricia Highsmith (The Talented Mr. Ripley), “Deep Water” takes us inside the marriage of picture-perfect Vic (Ben Affleck) and Melinda (Ana de Armas) Van Allen to discover the dangerous mind games they play and what happens to the people that get caught up in them. Melinda (Ana de Armas) and Vic (Ben Affleck), shown. (Photo by: Claire Folger/20th Century Studios. All rights reserved.)