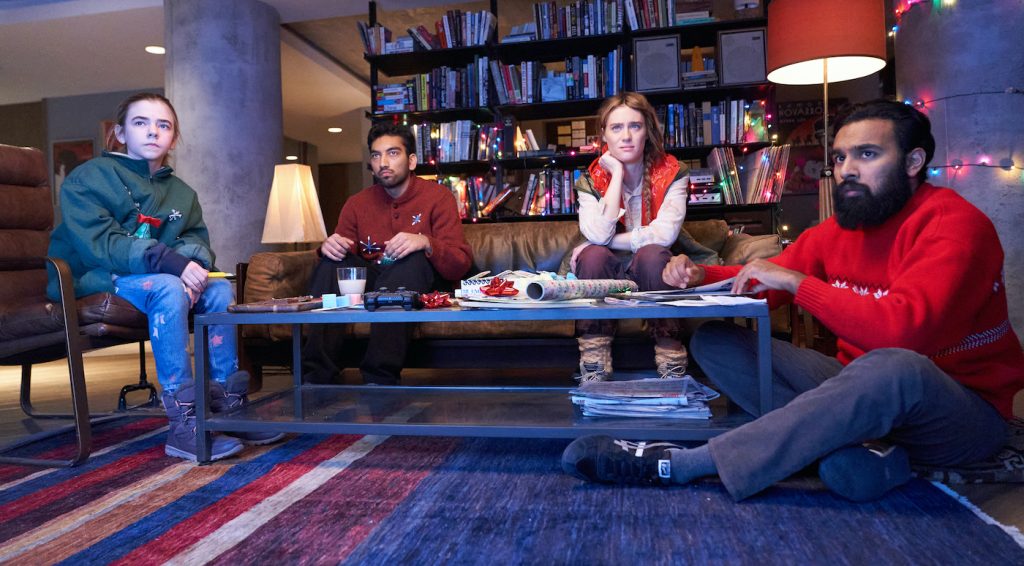 It was two days after Christmas when I texted cinematographer Christian Sprenger to ask if he’d be interested in talking about Station Eleven, the critically acclaimed limited series created for television by Patrick Somerville (Maniac, The Leftovers) on HBO Max. I had just finished watching the pilot episode “Wheel of Fire,” which he photographed alongside director Hiro Murai, and the visual aesthetics were astoundingly refreshing.

Adapted from the book by Emily St. John Mandel, Station Eleven puts a microscope on the connected lives of a group of people who survive a ruthless pandemic known as the Georgia Flu that wipes out most of humanity. The pilot acts as a pseudo origin story with a focus on Jeevan (Himesh Patel) and a sharp-witted young girl named Kirsten (Matilda Lawler). The two cross paths after a sudden incident during a live stage play of Shakespeare’s King Lear and their lives are forever changed when an outbreak spreads throughout Chicago.

The plot unfolds across three timelines: what happens before, during, and after the pandemic. Each scene reveals a fuller picture of the individual lives of these characters who are throttled by a global event. Each fresh revelation from these characters’ lives is a piece to a larger puzzle that will all connect by the end.

“One of the first formidable ideas that we discussed was this concept that we didn’t want to make a stereotypical post-apocalyptic aesthetic,” Sprenger says. “The story didn’t lend itself to a scorched Earth, doomsday apocalypse. The story was leaning in the opposite direction, which was more inspirational. It’s ultimately a story about survival – humanity’s ability to survive via the support of a community and a love for art, and, the importance of art to mankind. We were trying to wrap our heads around what that translated to visually.”

Director Murai and Sprenger have a shorthand after working on several projects together, including creating the look behind FX’s Atlanta. With Station Eleven, they referenced a number of naturalistic projects from Terrence Malick to cinematographer Emmanuel Lubezki that harness natural locations and natural light as a way to set the aesthetics. This approach became a “guiding light” that informed the color palette, location selections, camera movement, and focal length.

Instead of the future being a desolate wasteland, it’s vibrant, while the past and present are restrained in color. “The year 20 world wants to be this bright and colorful and natural, almost heavenly landscape,” says Sprenger. “The current world wants to be a little more subdued, a little more monochromatic, electronic or cold.” The idea infused itself into the production design and costumes.

Further aiding in the style was bringing in colorist Sam Daley early on. “The big reason why Atlanta has such a strong look is because our colorist Ricky Gausis was brought on during camera tests on the pilot and has colored every frame of the show since. We applied that philosophy on Station Eleven, but created something appropriate for the story,” says Sprenger. Bringing Daley in early, the colorist was able to give the director and DP feedback while lighting the pilot that immediately impacted the visual grammar, as opposed to after the final cut when options are limited.

Setting up the visual motif is the very opening scene – one that plants us in a dilapidated theater overrun by lush green vegetation and squealing wild hogs foraging for food. It’s a moment that represents the post-pandemic world in rich color. In a flash, it cuts to the present day where actor Gael García Bernal (playing the character Arthur) stands in a shower of powdery snow and bluish light as he recites lines as King Lear. All of this is in front of a captivated audience and framed using the exact same camera angle and location. It was these flashbacks and flash-forwards laced throughout the pilot that proved challenging.

To pull off the moment, production used three different theaters. In fact, the entire pilot was created using only practical locations. The portion with the pigs was shot at the Uptown Theater in Chicago. Production designer Ruth Ammon and the greens department transformed the space into a living forest while the special effects team built boxes to create the water puddles where we see an old playbill of King Lear connecting the future to the present.

Production then moved to the Congress Theater in the Loop to create the live production of King Lear where Jeevan watches in the audience with his girlfriend Laura (Grace Fahey). Like Uptown, it was completely dressed with plants to make it feel as if it’s been overrun by nature. After shooting the post-pandemic look, they marked the camera positions to match cut to present day, where they transformed the space into the live stage play. This is when we see Jeevan rush to the stage to help Arthur who is having a heart attack.

Coverage for scenes came out of discussions on how to approach a story that’s larger than life. “It’s about humanity and mankind and the modern world crumbling, but how do we contextualize that in a very small way where it’s still about people,” says Sprenger. “The beauty of the book, and ultimately the series, is this giant story that is ultimately about a dozen people, and by experiencing their emotional journey, you can understand how it must have felt for everyone.”

In framing the story, decisions came down to personal taste and aesthetics both the director and cinematographer share. Most of the pilot was shot using a 40mm focal length which became the starting point for coverage. In the open, Sprenger wanted to convey a specific feeling for Gael Garcia Bernal’s King Lear monologue. “Hiro, Gael, and I had a lot of fun choreographing and blocking the camera together in that scene and eventually we found a very present and urgent sentiment.”

With close-ups the philosophy was twofold. One was to restrain their use until it was “absolutely necessary” or a “pinnacle moment” in the story. The other was to physically move the camera closer to the subject’s face. “When you’re giving a close-up, especially on television, you’re giving [the audience] everything they want. You’re giving them the full emotion of a character. If you’re constantly giving a 10, then you don’t know what a 0 or a 2 feels like. If you restrain that 10 and use it as a special punctuation, it makes the use of a close-up so much more important,” explains Sprenger.

One such moment is when Jeevan is on the L train with Kirsten and receives a phone call from his doctor sister (Tiya Sircar). She warns him about the outbreak and says to take shelter at their brother Frank’s (Nabhaan Rizwan) house. As he starts to panic, we get to see the emotion on Jeevan’s face with a close-up that might have been missed with wider framing.  It’s a moment Sprenger says they “wanted to evoke a claustrophobic feeling of the world closing in on Jeevan as he learned this shocking news.”

In other scenes, they let the world end in the background. Like the sequence when an airplane crashes into Navy Pier and Kirsten, Jeevan and Frank watch it burn from inside an apartment building. “We could have shot that in many different ways but Hiro felt like the most important way to tell that story was to let it happen mostly off-screen and let it be about the characters and their reaction to it as opposed to jumping outside the apartment and showing this grandiose explosion,” says Sprenger.

In developing the look for the show Sprenger says, “You want to create something that the audience engages with and ideally escapes into the story. With TV, you don’t have the luxury of locking up an audience inside a black box where they have nothing else to do, so it’s challenging as filmmakers to make sure they stay engaged – to come up with ways to encourage people to pay attention.” With Station Eleven, they very much hold your attention. So much so it made me send a text wanting to know more.