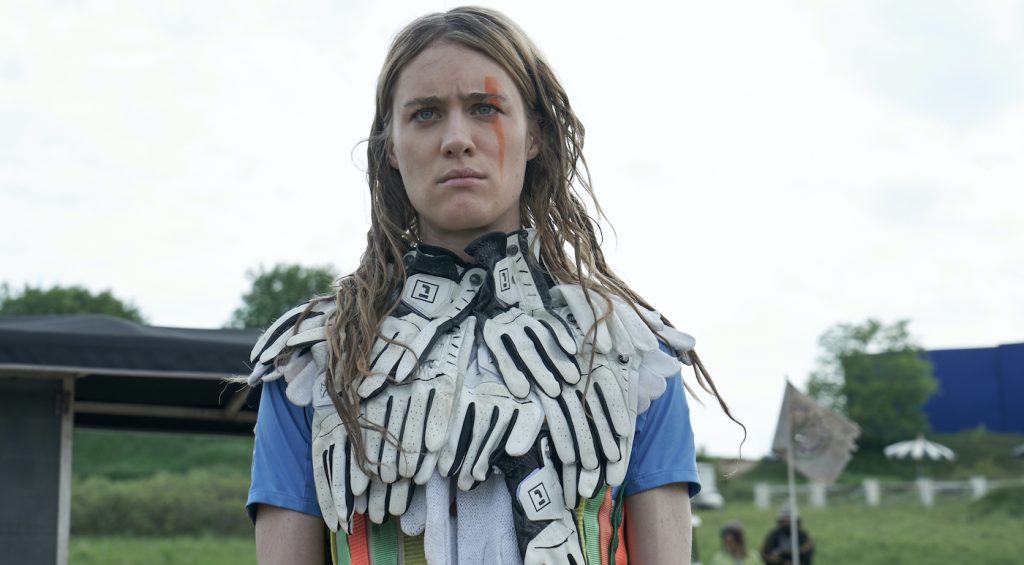 In times of fear, great loss, and regression in civilized society, creativity and culture will still blossom. This is not only the hopeful message of Station Eleven but also a truth about our world, proven by the fact that the show exists at all. The production team for HBO’s post-pandemic miniseries was a few episodes in when life began to imitate art, and art began springing up everywhere.

“You think about our pandemic, what did we do during the pandemic? People didn’t shrivel up and die when they were at home,” costume designer Helen Huang observed. “There were a lot of crafts. People were baking sourdough. Out of not being able to go out, people reverted back to making things. How amazing is that?”

Based on Emily St. John Mandel’s bestselling novel, Station Eleven is a survival story about what keeps us going when we need more than food, water, and shelter to get us through dark days. The characters turn in different directions to look for meaning after a deadly flu-like epidemic dismantles society. Kirsten (Mackenzie Davis) carries her love of acting into the new world and joins a traveling Shakespeare troupe that performs for fellow survivors.

Huang envisioned the famous theatrical costumes in a new, unbridled way. Abandoning the traditional European style, she analyzed the elements of what made each character identifiable. “It could be anything. If you think about it, people didn’t have the opportunity with sewing machines and electricity to make these things in that way. How can they put together these elements that still say that it’s Hamlet?”

With the production of goods halted, the characters had to use what they could salvage from the before times in their performances. “We had a Gertrude character, and her costume is all this found fabric. Hamlet is a bunch of bound puffers.”

Many of Shakespeare’s characters are royalty, which needed to come across on screen, even with the actors being limited in resources. Huang referenced the work of Phyllis Galembo who documented spiritual practices and masquerades all over the world in her photography. “We made crowns out of everything,” Huang recalled. “Out of wire, out of cardboard. We made crowns out of thimbles and painted them. All of just found materials to make these iconic symbols.”

Huang and her team tested designs on body doubles before putting the looks on the cast. “I have a brilliant team of cutter/fitters and ager/dyers who every day I would give inspiration photos to,” Huang explained. “We would give photos of not only physical clothes, but sometimes I would give them a photo of a ball of yarn and I would say, ‘Go. I want this to look like this.’ God bless their hearts. They would just experiment and make weird and wonderful things and we would look at them on people and go, ‘Okay, we could do a little bit more or a little bit less.’ There was a lot of dexterity of the mind with the whole crew to try and figure out was this looks like.”

Rather than a dusty and desolate planet that is often the setting of post-apocalyptic stories on screen, Station Eleven depicts nature reclaiming urban spaces when humanity dwindles. Huang credits series creator Patrick Somerville with the abundant and green setting that served as an inspiration for her designs. “I was just thinking that I would lead with this lush forest overgrowing on top of things because I really wanted the series to be somehow a memory,” Huang described. “It’s a memory of our civilization and it’s a tribute to people being creative individuals and people needing art, which is a big thing in this whole show and what that would look like.”

Part of that memory of a time before the deadly event is dressing for gatherings. The characters carry that drive to wear clothing for fashion and expression, not just utility. “Even into the future, if you’re dealing with resources, obviously the look would be still this continuation of a remembrance of what we are,” Huang explained. “I really like to think that people still want to dress. In this new society, people are interacting again. Going through the pandemic, that’s become more obvious, right? Like even though there are dire times, people still come out of odd situations still wanting to dress. So, there’s no need for people to be devoid of personality in the future.”

Personality is so strongly reflected in the way we dress. Often, Huang noted, we grow attached to certain stores and brands based on how they are marketed to us. When mass-produced goods and a barrage of advertising suddenly stop, the way we present ourselves will inevitably be affected. “If you really think about it and look at pictures of countries around the world that have a lack of resources and aren’t being marketed to so much, you see that there’s a quality to the dress that’s more utilitarian and more of a mix of signals,” Huang observed. “They’re getting their clothes in a noncontextual way. For example, men can wear dresses. Men can wear children’s patterns. Mackenzie can be wearing a ski suit from the 80s. The message is gone. You don’t have to be so literal with dressing a person.”

The real-life lockdown hit hard during production as Station Eleven was underway in Canada. Huang and her team found themselves with fewer options than is typical during filming. “The only places that were open to us were vintage places,” she explained. “Like places where you dig in barrels for clothing. So, we utilized a lot of that. It made the end product look so much better because we were limited, very limited, as in their time period where they have to scavenge.”

Luckily, used clothing was a perfect fit for the series. Even items showing wear and tear were appropriate for the show. “A lot of them were actually falling to pieces,” Huang shared. “This is the only project where if it was falling to pieces, we’re like, let’s just duct tape the seams. Let’s figure out how someone who can’t sew, how they would patch this up.”

Sustainability becomes important when someone is living a nomadic life like the characters of Station Eleven. Huang’s team needed to reflect a society where new clothing wasn’t being produced. “The aging is actually the most important part to make it so this world feels grounded,” Huang said. “Because it is sort of the passage of time on the article. It is art in a way. We had an excellent ager and dyer who knew so much about how things age.”

The traveling performers were bound to show signs of wear on their clothing. “We had a lot of things that looked sun-bleached. It’s not washed all the time, so what are the stains that are involved in it. We had to do a combination.”

Although much was lost for the characters when the pandemic hit, Huang made sure to remember that things from before the event still hold value and meaning. Perhaps, even more so. “We did try to repeat things like hats and stuff. If you really think about it, those are the things that help you from the elements and you probably would hold onto because of practical value. We also thought of sentimental things that people would hold onto because that is still an emotion that you would want to do.”