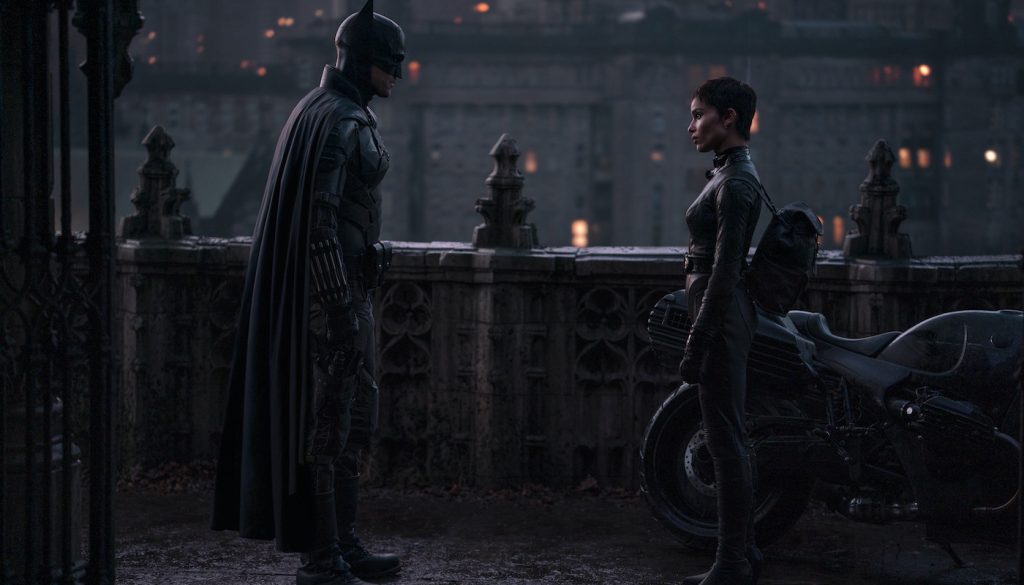 As we near the March 4th release date for The Batman, we’re getting, piece by piece, a somewhat clearer picture of what this return trip to Gotham will be like. We know writer/director Matt Reeves has crafted a noir detective story. We know that this story will revolve, at least in large part, around a young Batman (Robert Pattinson) during only his second year of vigilante work. We know the main villain will be the Riddler (Paul Dano), the perfect engine for a detective story considering he’s a clue-and-cipher-loving maniac. We know Selina Kyle/Catwoman (Zoë Kravitz) will feature prominently in the film. And we’ve been told, again and again, that The Batman won’t feel like any other film about the Caped Crusader before it. In fact, we can be certain no one will call him a Caped Crusader. It’s not that kind of Gotham.

Considering The Batman is the longest film in the franchise’s history and one of the longest superhero movies ever made, there is clearly a ton we won’t know until we actually see it. Reeves and his talented cast and crew have created a meaty, moody epic, so every little piece of fresh information we can get from those involved adds a little bit to the bigger picture. Speaking with TotalFilm, Pattinson and Kravitz discussed what makes The Batman so different from previous iterations, and why they’re so excited for people to see it.

Kravitz has spoken before about how refreshing her conversation with Reeves about Catwoman have been. Last year, speaking with AnotherMag, she revealed that she told Reeves she was interested in exploring Catwoman not just as this iconic character from the DC canon, but as a real person who defies the stereotype:

“It was important to give him an idea of what it’s really like to work with me. To say what I really think and, if we’re on set together, to ask the questions I want to ask. I tried to come at it from the angle where I am showing him what I see and feel about this character,” she told AnotherMag. “…I also tried to think about it not as Catwoman, but as a woman, how does this make me feel? How are we approaching this and how are we making sure we’re not fetishizing or creating a stereotype? I knew it needed to be a real person.”

Speaking with TotalFilm, Kravitz expanded on this line of thinking:

“To see a person like Selina really get in touch with her power and become Catwoman? That’s a journey that I’m really interested in exploring. We haven’t quite seen that yet. We usually meet Catwoman, and it’s either a very quick transformation – an overnight thing – or she’s already there. And so to find the emotional journey that brings her to the place where she is making the choice to be this person, is what I’m really excited about.”

Pattinson, meanwhile, talked about the impact that seeing The Batman had on him, and how it’s truly unlike any other films in the franchise he’s seen before. He also nodded to the superhero film’s tendency—or outright need—to tease a sequel:

“When I saw it the first time, even from the first shot, it does feel incredibly different, tonally, to the other movie. And it’s so strange, and kind of… It’s sad, and quite touching. It’s a really, really unusual Batman story, and it almost seems harder for me to imagine it being a series afterward. I mean, they always have that little bit at the end, that’s like: ‘…and coming up!’ But other than that, it feels strangely personal. I think people will be quite shocked at how different it is.”

There’s no doubt that The Batman is one of the most eagerly anticipated films this year, and the caliber of talent involved is a big reason why. So too is the promise of a different kind of Batman story, one that eschews the usual template of seeing Bruce Wayne’s parents get killed, watching Bruce transform into the Batman, and then seeing Bruce satisfy (at least temporarily) his thirst for revenge by taking out a villain. While there’s still going to be a Batman v. Supervillain centering The Batman, it sounds like the larger film surrounding that central conflict will be very different indeed. And whether or not that story demands a sequel, well, that’ll depend on a lot of factors, not least of which is whether Reeves and Pattinson see a fresh story to tell. We’re guessing they will.