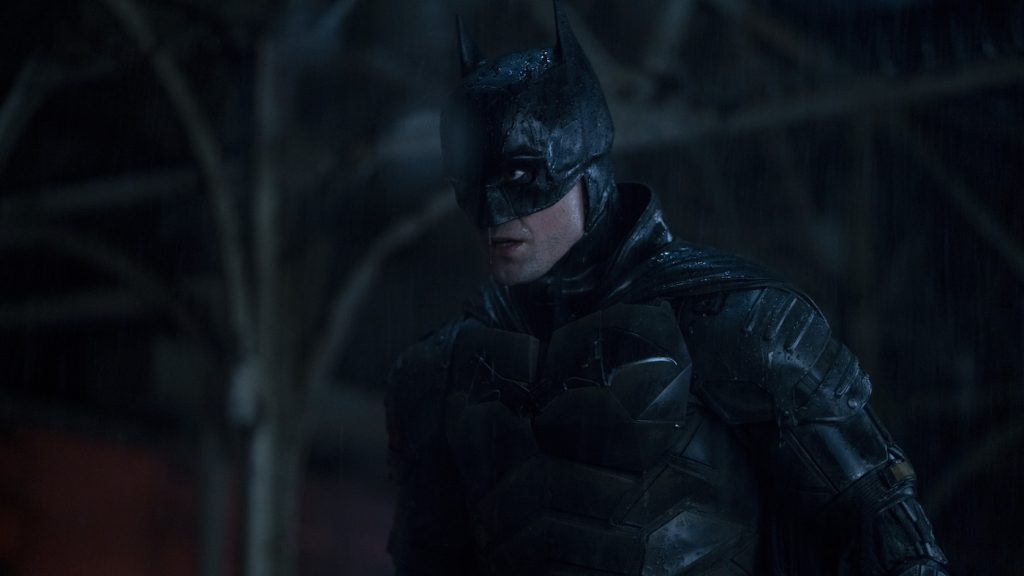 Robert Pattinson was always going to bring something unique to his portrayal of Bruce Wayne. We knew this from the moment his casting was announced, as he’s chosen a post-Twilight career path that has been focused on characters in extremis. Whether it was playing a wildcard bank robber hellbent on freeing his brother from prison in the Safdie brothers insane Good Time to a lighthouse keeper barreling towards, then far, far past the edge of sanity in The Lighthouse, Pattinson has gravitated towards men in turmoil.

This brings us to his iteration of Bruce Wayne in writer/director Matt Reeve’s The Batman. We’ve known for a while now that Reeves’ vision for the character was steeped in the specifics of the noir detective story, a far cry from the usual template for a superhero movie, even one based on the most brooding character in the comics canon. What’s more, Reeves promised that his film would eschew the origin story in favor of dropping in on an already formed Batman in year two of his work. What we weren’t sure about was what kind of Batman Pattinson would be, even if we were confident he’d bring his usual intensity and edginess to the role. Yet Pattinson has been giving us hints along the way, and now he reveals just how different of a Bruce Wayne he’s portraying in a new profile in GQ.

“I’ve definitely found a little interesting thread. He doesn’t have a playboy persona at all, so he’s kind of a weirdo as Bruce and a weirdo as Batman, and I kept thinking there’s a more nihilistic slant to it,” Pattinson told GQ. “’Cause, normally, in all the other movies, Bruce goes away, trains, and returns to Gotham believing in himself, thinking, I’m gonna change things here. But in this, it’s sort of implied that he’s had a bit of a breakdown. But this thing he’s doing, it’s not even working. Like, it’s two years into it, and the crime has gotten worse since Bruce started being Batman. The people of Gotham think that he’s just another symptom of how shit everything is. There’s this scene where he’s beating everyone up on this train platform, and I just love that there’s a bit in the script where the guy he’s saving is also just like: Ahh! It’s worse! You’re either being mugged by some gang members, or a monster comes and, like, fucking beats everybody up! The guy has no idea that Batman’s come to save him. It just looks like this werewolf.”

We’ve never heard the Batman/werewolf comparison, but it’s apt considering both require a transformation into a savage beast. The glimpses we’ve seen thus far have definitely depicted a non-glamorous Bruce Wayne, one who looks sullen, bitter, and ready to snap. Even Ben Affleck’s vengeful, furious Bruce Wayne in Batman v Superman still partook in a cocktail party (at Lex Luthor’s place, no less) and enjoyed an expensive car or three. Pattinson’s Bruce Wayne, however, looks like he hasn’t socialized with anyone save Alfred since he was a child. Just look at how dour he is in The Batman‘s funeral scene.

Pattinson goes on to describe an interaction with the ever-loyal Alfred (Andy Serkis) that further exemplifies his tortured version of Bruce Wayne. Alfred bemoans the fact that, according to him, Bruce is besmirching the Wayne family name by dressing up like a bat and beating up criminals at night. “This is my family legacy,” Bruce replies. “If I don’t do this, then there’s nothing else for me.” The key part is that “there’s nothing left for me” bit, depicting a young man who has all but lost his connection to humanity. Here’s how Pattinson read this exchange:

“I think that makes it a lot sadder,” he told GQ. “Like, it’s a sad movie. It’s kind of about him trying to find some element of hope, in himself, and not just the city. Normally, Bruce never questions his own ability; he questions the city’s ability to change. But I mean, it’s kind of such an insane thing to do: The only way I can live is to dress up as a bat.”

Considering The Batman runs at nearly three hours long, these tidbits, while intriguing, are giving us only a hint of what he, Reeves, and The Batman team have in store for us.

Pattinson and Serkis are joined by a stellar cast, including Zoë Kravitz as Selina Kyle/Catwoman, Colin Farrell as Oswald Cobblepot/The Penguin, Paul Dano as Edward Nashton/The Riddler, and Jeffrey Wright as Jim Gordon.

The Batman swoops into theaters on March 4.