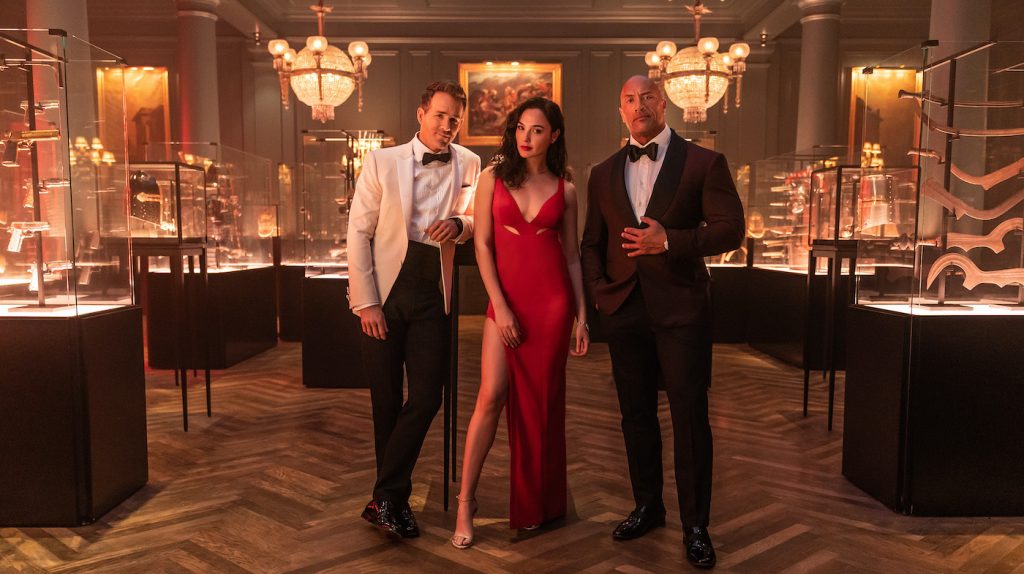 If you’re going to bring out a big, bold new caper that’s meant to be both funny and thrilling, who better to enlist as your three leads than Dwayne Johnson, Ryan Reynolds, and Gal Gadot? Writer/director Rawson Marshall Thurber already has a rich history with Johnson, having directed him in the dizzy action-adventure Skyscraper and the espionage comedy Central Intelligence. In Red Notice, Thurber has crafted an original caper starring Johnson as an FBI profiler named John Hartley who’s trying to clear his name—he’s been given a dreaded Red Notice by Interpol—by enlisting the help of the world’s second most famous art thief, Reynold’s Nolan Booth.

In order to clear his name, Hartley needs Booth to help him track down the world’s number one art thief, Gadot’s Sarah Black, known as “The Bishop.” It was The Bishop who set Hartley up for a crime he didn’t commit, earning him the Interpol’s aforementioned “Red Notice” alert, which means agents from all over the world are trying to track him down. The only way to clear his name is if he and Booth can capture The Bishop. It’s a fun conceit for a caper, and with three megawatt stars leading the way it has the potential to be a hit for Netflix. The film was a hot commodity when it was first pitched back in 2018 and was the subject of an intense bidding war. Now, at long last, Thurber’s A-list comedy/adventure is ready for its debut.

Check out the official trailer below. Red Notice will be served up on Netflix on November 12.