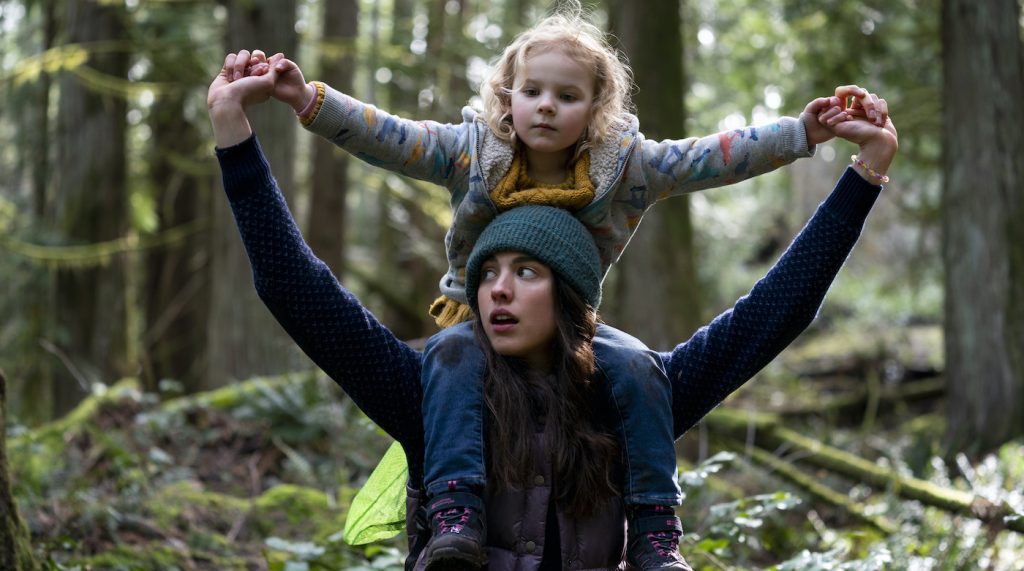 How do you dramatize poverty, abuse, systemic misogyny in a TV show without creating a series of lectures, or a documentary? This was one of the challenges facing Maid showrunner Molly Smith Metzler when she set out to adapt author Stephanie Land’s best-selling memoir “Maid: Hard Work, Low Pay, and a Mother’s Will to Survive.” Through ten episodes, Metzler’s show, starring a phenomenal Margaret Qualley as Alex, manages to deliver a riveting portrait of a young mother fleeing an abusive relationship with her young daughter and trying to make ends meet in Washington as a maid. Although she lives in a state home to one of the most liberal cities in the country, Washington also happens to have some insanely draconian laws pertaining to women still on the books. It’s one of the many things we learn watching Maid, but we keep watching mainly because we care about Alex and want to see what happens next.

Maid captures Alex’s struggle to figure out a way to not only survive, but to give her daughter a chance to have a normal childhood, one free from an emotionally abusive father and where simple things like school, shelter, and food are a given, not the elusive components of a dream life. And while Alex isn’t alone in the world—she has friends, and a wildly unreliable mother, Paula (played Andie MacDowell, Qualley’s real-life mother)—Maid reveals just how many Americans rely on social services when their razor-thin purchase on the basic necessities in life is thrown into chaos.

In Maid, that chaos is mainly created by Sean (Nick Robinson), whose torment of Alex doesn’t meet Washington’s standards of domestic abuse because he leaves no bruises or visible scars as evidence. Yet what he does do is emotionally torture her, creating a highly unstable, dangerous environment for Alex and her daughter Maddy (Rylea Nevaeh Whittet). In an early scene in the pilot, Alex learns that even though she’s been emotionally terrorized and is now homeless, the only way she can qualify for subsidized housing or childcare is by providing a paystub from a job. “I need a job to prove that I need daycare in order to get a job?” Alex asks the social worker. “What kind of f-ckery is that?” What kind indeed.

We spoke to Metzler about how she turned Land’s riveting, wrenching memoir into a compelling, deeply compassionate series, and how she found a way to lay bare the agonizing choices so many Americans are forced to make by a system that often fails them.

How did you begin your adaptation process from Stephanie Land’s book? What are your initial steps like?

The first thing you do is decide you’re the writer in this world that has to write it. You read the book, and then you read it again and again and see if you can’t sleep after, and if kind of ruins your life because it’s changed your perspective about the world. If those things are all true, then you’re the right writer to do it. Then it’s about opening it up wide and finding the emotional truth of the memoir and really committing to telling that truth. Then I do a ton of research, and then I put it all aside and remember I don’t work for the book, I work for the audience. They’re supposed to be different. This gives me a sense of freedom. My job is to make this entertaining for ten hours so that my cousin in Ohio might want to watch.

How do you intuit where to veer off from the specifics of the book?

I’m a playwright, so I come from the theater world where we spend two years writing a play. It’s a very instinctual kind of writing in the theater. TV works so much quicker, of course, but I do think it’s the same in a fundamental way. You feel it or you don’t. Writing Maid was also a very instinctual show, our writer’s room had a lot of playwrights. We set some very specific rules about Alex’s point of view and when we would pop out, and our rule was we’d never pop out unless it was to move the emotional story forward. We never did it just for fun or no reason, and we followed that instinct to the end.

The show deals with so many inequities in American life, especially for poor women, yet it’s riveting without it becoming oppressively dark. How’d you manage that?

Well, thank you for saying that. I’m a comedy writer, I’ve written for Shameless and Casual and Orange Is the New Black, and I live in that in-between world between drama and comedy. The place where they dance together is my jam. So I agree with you, the version of Maid that was just a slog, that was just bad thing after bad thing, that’s not a show I want to watch, and I highly doubt it’s a show anyone else wants to watch, either. The key for me and the writers was we felt that she has to be funny. She has to be a true 25-year old who can’t afford to get a burger with her friends, who is horny sometimes. A bunch of legal jargon in a courtroom is going to sound like legal jargon. It was doing the character work, really committing to the question, ‘Is this how Alex would be experiencing this in the moment?’ It all comes from her, it’s like she wrote the show.

The series reveals a lot of paradoxes that exist at the heart of the social services and the law that Alex and many of the women she meets rely on. How much of that came from the book versus your own research?

We did a ton of research about some of the systems and programs and benefits Stephanie brings up in the book, so we wanted to make sure we were accurate to today. I was shocked because I had no idea about some of the domestic violence laws in the country. The show was going to be set in Washington state, so we worked with a consultant and a family lawyer and I came to understand that in the state of Washington, emotional abuse is not considered domestic violence. It always boils down to his word against hers. They want evidence, they want bruises, they want witnesses. This incredibly violent form of abuse is not recognized in lots of courts of law as domestic violence. This blew my mind, and I became very angry, but also very interested in how can I talk about that in a dramatic way. My idea was to put it on screen. I dare you to watch Maid and tell me that’s not abuse. It is hideous abuse. The backbone of my job was that none of it matters if people don’t watch it. None of this wonderful information and these really important civic lessons matter if people turn the show off. So it was a motivating way to dramatize something is to create a character that you have to see what happens to them, and then sneakily, you have to see to what happens in terms of socioeconomics as well.

I was hoping you could walk me through the casting process.

When we sold the show and I started writing the pilot, I knew well in advance that we were going to spend the entire ten episodes from the point of view of Alex. She’s in every single frame. When we got into it, it’s hard to describe what you’re looking for. When we met Margaret, she had her laptop propped up on a lamp, it was Zoom, it was the pandemic, she was just funny and wacky and genuine and open. Then when we did the material with her there was just such an unaffected quality to her work, she’s so raw and there’s such a lack of vanity, too. Once we met her we knew she was our Alex, so then the question was who was going to play Paula. We were all like, ‘Should we bring up Andie?’ I don’t know if my daughter would want to spend nine months on a rainy island in Canada with me, so we yielded on that idea. Then the idea came from Margaret, which was a beautiful relief. She said, “I want my mom here, I want to share this with my mom.” It came from this place of real generosity from the two of them, and it informed not just the writing but the entire production. We were telling this story about motherhood with a real mother and daughter at the center of it. They hugged between takes, they made soup together on the weekends, they shared this experience.

How did it feel when you finally saw the series in its entirety?

I felt really proud. I know that’s a weird thing to say. I’m very critical of my own work. I just really care about this story, and when I saw it, I felt like everyone’s love and commitment to the story was so apparent on the screen. So I felt uncharacteristically proud, and I’m really excited for everyone to see it.

Finally, the degree of difficulty you faced here seemed slightly raised. Adapting a best-selling memoir in the middle of a global pandemic for your first showrunning job? Sheesh.

My husband is also a writer and producer for the show, so my family was with me in Canada, which was wonderful, but there were a lot of mornings where we were like, you know, this is not easy. We could have written a sitcom.

Maid premieres on Netflix on October 1.