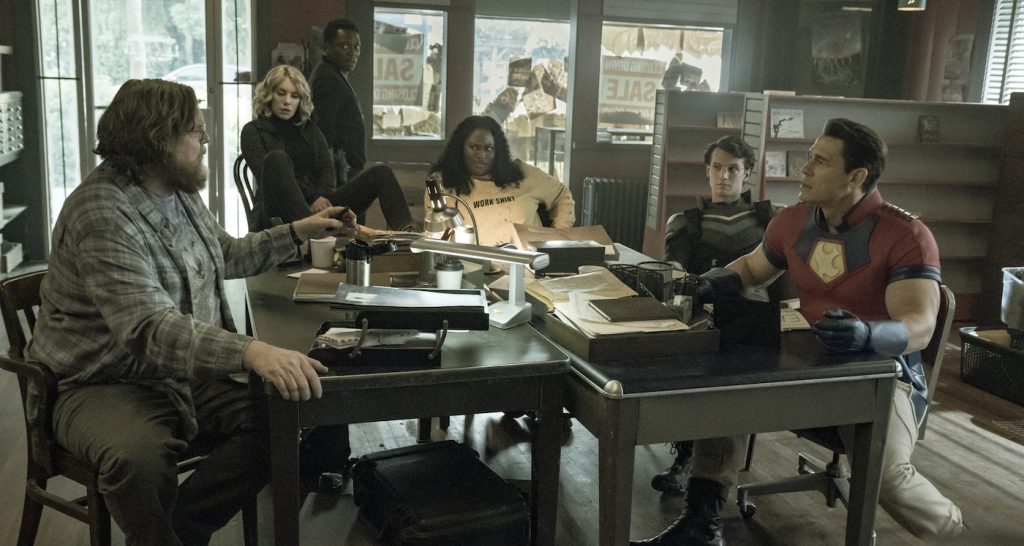 If you were curious about the tone in James Gunn’s upcoming The Suicide Squad spinoff Peacemaker, this clip from the upcoming HBO Max series will set you straight. John Cena reprises his role from the film as the titular Peacemaker, the peace-obsessed superhero who will stop at literally nothing to achieve it, including hurting everybody in sight. The clip shows us Peacemaker meeting his new colleagues for dinner, but the beefcake shows up in full “cos-play” look, wearing the shiny helmet, red top, and white paints. Those new colleagues are not only aghast that he walks around like that in public, but that he’s got a bald eagle in the back seat of his car (named Eagle-y, no less).

The clip is also chock-a-block with F-bombs. Clearly, Gunn is having a blast with the format here, which gives him more time to focus on the insanities (and inanities) of the superhero life by putting one of them in the midst of a bunch of wisecracking normies. Those wisecrackers at the restaurant are John Economos (Steve Agee), Leota Adebayo (Danielle Brooks), Emilia Harcourt (Jennifer Holland), and Clemson Murn (Chukwudi Iwuji).

Gunn pitched HBO the concept for the series in the midst of working on The Suicide Squad, believing there was more story to tell around Cena’s living paradox of a character. This clip shows that Gunn is brought his trademark irreverence to the show and that even if Cena’s titular superhero manages to keep the peace (by creating chaos), he’s still going to get made fun of for dressing like that.

Peacemaker arrives on HBO Max this January. Check out the clip below.