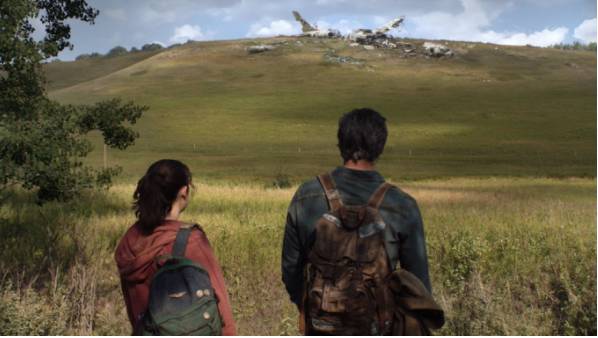 The talk about HBO’s upcoming series The Last Of Us, starring Pedro Pascal and Bella Ramsey as two survivors of a plague, is that the premium cable network has poured immense resources into the series. The show, based on a popular PlayStation game of the same name, is said to be the most expensive, expansive, sprawling thing that network has attempted since it was herding dragons in Westeros in Game of Thrones. Now, we’ve got our first little peek at it, a shot of Pascal and Ramsey (both Game of Thrones alums, it should be noted) looking out over a grassy hill where a plane has crashed some time ago.

The story centers on Joel (Pascal), a hardy, hardened survivor hired to smuggle Ellie (Ramsey) out of a quarantine zone. While it sounds like a straightforward job, it ends up becoming an epic, dangerous journey across a destroyed United States. For fans of the video game, the image that Naughty Dog shared (they’re the video game developer and the series producer) is stunning in how closely it matches Joel and Ellie from the game, down to the dusty, beat-up backpacks.

Joining Pascal and Ramsey are Gabriel Luna as Joe’s brother Tommy, Merle Dandridge reprises her video game role of Marlene, the leader of a resistance group, and Nico Parker as Joel’s daughter Sarah. The Last Of Us comes from Chernobyl creator Craig Mazin, who co-wrote the series with Neil Druckmann, a writer and creative director from the video game. The series is currently in production. We’re hoping for teaser or trailer soon.

Featured image: Bella Ramsey and Pedro Pascal in “The Last Of Us.” Courtesy of Naughty Dog/HBO.