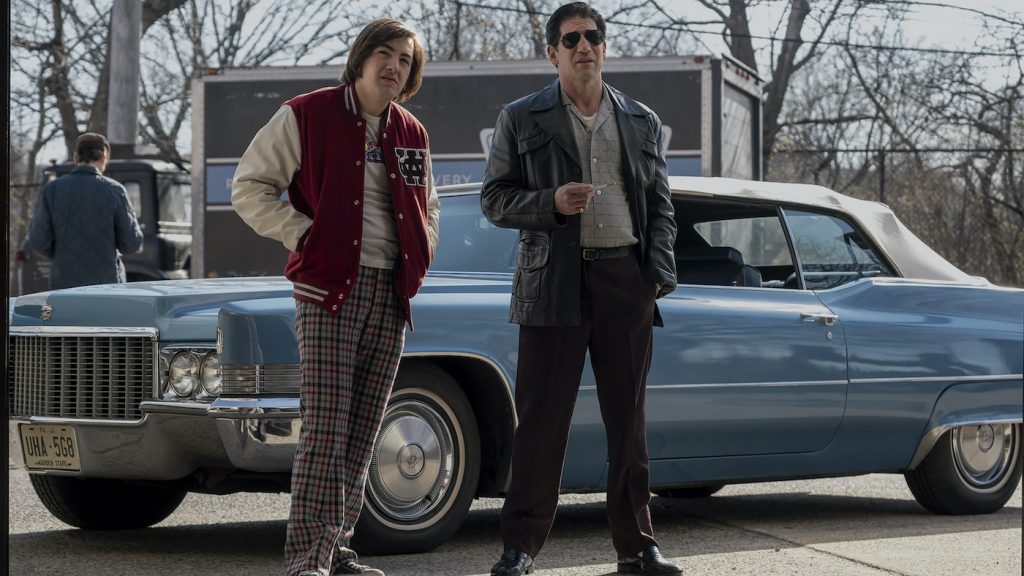 Where did Tony Soprano come from? In The Many Saints of Newark, director Alan Taylor’s prequel to the HBO series, the show’s creator, David Chase, revisits a bygone Newark to give us Tony’s formative years via mid-century period piece. “Tony starts out as a six-year-old, and by the second time period, he’s a teenager,” says Kramer Morgenthau, the film’s cinematographer. As such, “there was the 1960s and then it goes into the 70s, and there are different looks for each time.”

Throughout the film, which finally brings the original Soprano’s cinematic-quality legacy to the actual big screen, Morgenthau used lookup tables to digitally recreate the feeling of Kodachrome and Ektachrome film stock. “As a cinematographer on the prequel, I wanted to honor some of the language of the show, but our film is very much a visual departure,” he pointed out. “It’s a period piece, so it has a very different vibe.” And the aesthetic of Newark’s Italian-American North Ward neighborhood in the 1960s was hardly an exact reflection of its own period. “The characters are much more rooted in the 50s than what was happening in the 60s because they’re gangsters. They’re not trendy guys,” Morgenthau said.

On that note, the grain from Kodachrome film stocks of yore which the cinematographer and his team emulated also emerged even earlier than the time period at hand, even if they were still in use in the 1960s. It’s when the film hits the 1970s that “we went into the Ektachrome feeling — more pastel, more desaturated. They’re being affected by the change that had happened in the 60s,” with the sprawling Soprano-Moltisanti clan finally forced by outside events to catch up with the world around them.

The era’s social upheaval is central to the film. Young Tony (played by William Ludwig as a child and by the late James Gandolfini’s son, Michael, as an adolescent), is enamored of his uncle Dickie Moltisanti (Alessandro Nivola), who jokes, cajoles, and absolutely runs his clan. Dickie’s dealings also see him working on and off with Harold McBrayer (Leslie Odom Jr.), who runs organized crime over on his side of Newark. But when something goes horribly wrong in Dickie’s world, he uses the uprising in Harold’s community as a cover. Over four days in July 1967, Newark was gripped by race riots after the police arrested and beat a Black cab driver, and a rumor quickly spread that they’d murdered the man, John William Smith. The Many Saints of Newark captures the real pain and chaos of a city in flames, as well as the film’s version of how the local Italian mafia used the events to make hay.

“We studied the newsreels of what happened in Newark, and what was happening then was very shockingly similar to what was happening in the last year in the United States,” Morgenthau said. But “Newark today doesn’t look like what it was back then. We had to go to other parts of the New York Metropolitan area,” to shoot, which included Bay Bridge, Brooklyn, Richmond Hill, in Queens, and parts of the Bronx, Yonkers, and Westchester. Much of the movie was shot on location, with Morgenthau crediting production designer Bob Shaw as well as Taylor and Chase for meticulously making it work.

“David Chase was a huge presence on the set and the godfather of the whole series. If it didn’t look right to him, if it didn’t feel like New Jersey, if it didn’t smell like New Jersey, he wasn’t interested in it,” Morgenthau said. Chase, who drew from childhood memories in creating the film, would have even preferred to shoot in New Jersey, but in terms of the filmmaking itself, “Alan, the director, and I were very much allowed the freedom to frame it, light it, shoot it, design the shots,” as long as the tone felt right.

“It was a big honor to be asked to shoot the Sopranos prequel,” Morgenthau said, particularly given that the original series is now a piece of Americana. Against a heady, lightly desaturated backdrop of row houses, funerals, beauty parlors, and gangly kids running to the ice cream man on a hot summer day, indigent young Tony slouches his way toward adulthood. He avoids his unpredictable mother, Livia, (Vera Farmiga), yet he’s unquestioningly loyal to his disarming, murderous uncle Dickie. How did Tony become the iconically depressed, violent, therapy-going family man-cum-mafioso he grew into? The Many Saints of Newark paints a pretty clear picture.

For more on The Many Saints of Newark, check out these stories: